Plans for a biometric security system in cannabis-selling coffee shops in the Dutch town of Maastricht have been dropped - but they're still going to be taking smokers' fingerprints when they buy their stash. Cannabis smokers in the Dutch town of Maastricht can breathe a bit easier. A proposed biometric security system the town's 15 coffee shops had planned on installing this summer has been changed due to its expense and threats to customer privacy. Initially, the Maastricht coffee shop union's new security system required a customer to register and submit to face and fingerprint scans, which would have been stored in an electronic database. Despite the clear threat to customer privacy that the new system presented, the coffee shops felt it was the only way to protect their businesses from the stiff government penalties against selling more than the legal daily limit per customer, or selling to minors. Marc Josemans, who has owned the Maastricht coffee shop Easy Going for 23 years, told Spiegel online that if a shop is caught violating these rules, it is forced to close for three months. A second infraction means a six-month hiatus, and a third would close the shop for good. In contrast, according to Josemans, a bartender caught selling to
minors is charged a fine of a mere €360 ($483). With 27 employees at his shop, Josemans, who is also the head of the town's coffee shop union, decided that even though these penalties are "completely out of proportion" to the crime, it was better to start working with the system than risk such stiff penalties. A security system was the only option, he says. But, he says the biometric system turned out to be too complex, too expensive (at about €150,000 per shop) and too invasive to customer
privacy. The shops will still install a security system, but it will no longer store customers' personal and physical data. The new system, set to start in September, will cost each shop between €50,000 and €60,000 and will be able to check more than 1,200 types of identification. Additionally, shops will take customers' fingerprints, which will be thrown out at the end of each day. Though several other shops in Maastricht declined to answer SPIEGEL ONLINE's questions, Josemans says they're all installing the new system voluntarily. Josemans acknowledges that shops will lose business, but only in the beginning. "Don't worry, we make enough money, so that's not the worst thing," he says.

USA: Bong Hits 4 Jesus loses in Supreme Court. The Supreme Court tightened limits on student speech, ruling against a high school student and his 14-foot-long "Bong Hits 4 Jesus" banner. Schools may prohibit student expression that can be interpreted as advocating drug use, Chief Justice John Roberts wrote for the court
in a 5-4 ruling. Joseph Frederick unfurled his homemade sign on a winter morning in as the Olympic torch made its way through Juneau, Alaska, en route to  the Winter Olympics in Salt Lake City. Frederick said the banner was a nonsensical message that he first saw  on a snowboard. He intended the banner to proclaim his right to say
anything at all. His principal, Deborah Morse, said the phrase was a pro-drug message that had no place at a school-sanctioned event. Frederick denied that
he was advocating for drug use. "The message on Frederick's banner is cryptic," Roberts said. "But  Principal Morse thought the banner would be interpreted by those  viewing it as promoting illegal drug use, and that interpretation is plainly a reasonable one." Morse suspended the student, prompting a federal civil rights lawsuit. 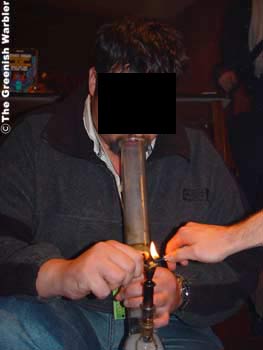 Students in public schools don't have the same rights as adults, but  neither do they leave their constitutional protections at the schoolhouse gate, as the court said in a landmark speech-rights ruling from Vietnam era. The court has limited what students can do in subsequent cases,  saying they may not be disruptive or lewd or interfere with a  school's basic educational mission. Frederick, now 23, said he later had to drop out of college after his  father lost his job. The elder Frederick, who worked for the company  that insures the Juneau schools, was fired in connection with his son's legal fight, the son said. A jury recently awarded Frank Frederick $200,000 in a lawsuit he filed over his firing. Joseph Frederick pleaded guilty in 2004 to a misdemeanor charge of selling marijuana at Stephen F. Austin State University in
Nagodoches, Texas, according to court records.

United Nations: The UNODC Report 2007 shows global markets for illicit drugs remained largely stable in 2005-06.  "For almost all drugs - cocaine, heroin, cannabis and amphetamines - there are signs of overall stability, whether we speak of production, trafficking or consumption," the Executive Director of the United Nations Office on Drugs and Crime, Antonio Maria Costa, said. And the report once again puts cannabis on par with heroine and cocaine: “[…] cannabis, the world's most abused illicit drug, which was more potent than it had been a few decades ago. Its harmful characteristics were no longer very different from those of other plant-based drugs such as cocaine and heroin.”