The Netherlands  -  In yet another sign of the cross-currents buffeting the Netherlands' cannabis industry, a leading Dutch bank announced it was closing the accounts of people who owned coffee shops.

The move comes as Dutch social conservatives, including members of the governing coalition, are making increasingly loud noises about criminality in the supply of cannabis to the coffee shops. Postbank announced the move last Friday. Part of the Dutch financial services giant ING Group, the Postbank has some 7.5 million private account holders and provides current and savings accounts, loans, mortgages, insurance, investments and pensions, making it one of the largest providers of financial services in the country. 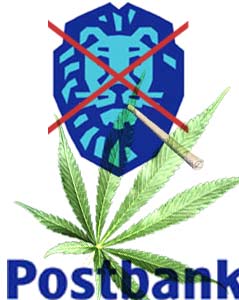 Postbank has no branches, but some services are available at post offices, and otherwise operates completely through land mail and telephone and electronic banking. A bank spokesman said that facilitating the marijuana and hashish trade can no longer be considered responsible. In addition to closing existing accounts, the bank will now screen new customers to ensure they are not involved in the cannabis business.

The move by Postbank sparked an angry response from the coffee shop trade association, the Cannabis Retailers Union. The group condemned the bank for what it called a hypocritical and moralistic crusade. The retailers noted that the bank is not canceling loans or mortgages made to people in the trade because that could impact its bottom line.

The new drug spice, which is advertised in the internet as a herbal mixture for fumigation, but is usually smoked and has effects similar to cannabis contains the synthetic cannabinoid JWH-018 according to an analysis by a Frankfurt laboratory (THC Pharm). Shortly after the detection of the active principle spice was prohibited in Austria. (Source: Frankfurter Rundschau, THC Pharm)

Germany: Medical cannabis will be distributed in Germany by Fagron Germany, a unit of Belgian medical wholesaler Arseus

Arseus said in a statement. Fagron Germany has an exclusive license for the import and distribution of medical cannabis in Germany. The statement says that Fagron Nederland has been active in the  Netherlands's medical cannabis market since 2003.

Fagron Netherlands is responsible for the distribution of cannabis to Dutch pharmacies. Use of the plant as a medicine is not legal in Germany. However, the Federal Institute for Pharmaceuticals and Medical Products has permitted four people to acquire cannabis from pharmacies. The exceptions were based on the advice of several doctors and only after it had been established that no other treatment would  help.

Their addition comes as another study dethrones folk remedy ginkgo biloba as proof against the disease. At a November meeting of the Society of Neuroscience in Washington, D.C., researchers from Ohio State University reported that THC, the main psychoactive substance in the cannabis plant, may reduce inflammation in the brain and even stimulate the formation of new brain cells.

USA/California: The Harborside Health Center, a city-licensed medical cannabis  dispensary, announced that it has begun laboratory analysis of its cannabis products.

All medicinal cannabis products accepted for distribution to HHC will be tested for safety and potency.

USA/New Jersey: Governor Jon S. Corzine said that he supports and would sign a bill allowing medicinal cannabis use.

The state Senate Health Committee approved a medical cannabis bill by a 6-1 vote on 15 December. The bill now goes to the whole senate.

A Spanish group of scientists investigated the effects of a synthetic cannabinoid (WIN55,212-2) on an animal model of multiple sclerosis.