a Dutch town was right in refusing to let foreigners buy cannabis, Europe's highest court said in a ruling on 16 December that will help the national government's plans to curb sales of the drug to tourists. The European Court of Justice ruled that the mayor of  Maastricht -- a southern town near the German and Belgian borders and not far from France -- was right to close down a coffee shop that had been selling cannabis to non-residents. 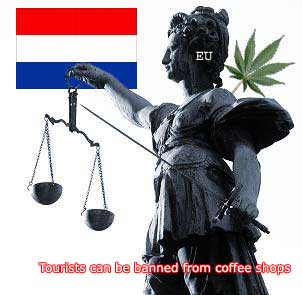 "A prohibition on admitting non-residents to coffee shops ... constitutes a measure capable of substantially limiting drug tourism and, consequently, of reducing the problems it causes," the Luxembourg-based court said in its judgment.

According to a new poll the majority of Iowans are in favour of the medical use of cannabis.

The poll found 62 percent of Iowans are in favour of legalizing medical cannabis, which is in line with the results from other states.

The first draft of the rules that could govern medical marijuana use in Arizona are now online. The rules are laid out in a 47 page document on the Arizona Department of Health Services Website.  You can take a look at it by clicking here. The rules cover everything from who can qualify to use medical marijuana, how dispensaries will be regulated and the role doctors need to play in the process.

Arizona health officials say they have two goals in mind.  They want to make sure the rules are strict enough to stop anyone who does not have a serious medical conation from abusing the system.  They also want to make sure doctors and caregivers are involved in the process. Arizona residents will have three weeks to comment on the rules.  Revised draft rules will be posted at the end of January.  The final draft must be done by April 13th.  That's when the state will begin reviewing applications for dispensaries and users.

On 13 December the state Senate passed a resolution to require  Governor Chris Christie's administration to rewrite its proposed regulations for the medical use of cannabis. Both the Senate and the Assembly have now voted that the proposed very restrictive regulations don't meet the Legislature's intent to create a system by which patients with certain conditions can have legal access to a drug that's illegal for everyone else.

Under the state constitution, the administration now has 30 days to rewrite its regulations governing medical cannabis growing and distribution. If it refuses, lawmakers could vote again to invalidate all or part of the proposed regulations.