The Netherlands: Dutch Supreme Court Says Patient Can Grow Marijuana for Therapeutic Use

Netherlands  -  The Dutch Supreme Court upheld an appeals court ruling allowing a patient suffering from multiple sclerosis to grow marijuana for therapeutic purposes. The high court found that while marijuana cultivation is illegal in Holland, patients could use what amounts to a medical necessity defense to avoid prosecution. 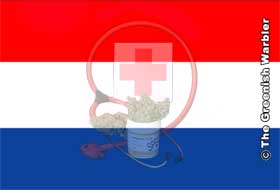 The Netherlands: Dutch Supreme Court Says Patient Can Grow Marijuana for Therapeutic Use
"An illegal scheme can be justified when committed out of necessity," the court ruled. In the case of the patient, the "exceptional circumstances" of his illness could get him out from under Dutch cannabis cultivation laws. "The state of necessity is established," the court held. The court upheld an October 2006 ruling in the case of MS sufferer Wim Moorlag and his wife, Klasiena Hooijers, that the couple could grow marijuana for use in alleviating his illness.

In trial court, the pair had been convicted of marijuana cultivation and fined $350. But the conservative Dutch government challenged the appeals court ruling, saying it set a precedent that could endanger the country's tolerant approach to marijuana. Moorlag and his wife argued that they needed to grow their own because marijuana available in Holland's famous coffeeshops could contain fungi and bacteria harmful to MS sufferers.

It is not clear what impact the decision will have on other Dutch medical marijuana patients. But after the 2006 appeals court ruling, Moorlag's lawyer said the decision meant that other patients, such as people with AIDS, would also be able to legally grow their own medicine.

South Asia  -  Ayurvedic medicine has been practiced for thousands of years in South Asia, but it many of its preparations, which include marijuana, conflict with modern proscriptions against the herb. Now, the Sri Lankan Ministry of Indigenous Medicine and its Department of Ayurvedha are seeking to resolve that conflict.

On Monday, the ministry announced it needs 20 acres of land to cultivate marijuana for use in a number of ayurvedic medications. The ministry has forwarded a cabinet paper seeking permission for the medicinal marijuana garden. It is also discussing the possible grow with the Dangerous Drugs Board.

"We have to consider the security side of cultivating cannabis even if it is for medicinal purposes. People are sure to misuse the permission granted to cultivate the psychoactive drug," said Minister for Indigenous Medicine Asoka Malimage. "It is required to prepare ayurvedic medicines such as Madana Modaka and several other drugs," he said. "We have to address the matter with care." Malimage said he would consult with his homologues in India about how their program works.

India already allows the cultivation of marijuana for ayurvedic preparations. Ayurvedha Commissioner Ramani Gunawardhana said Sri Lanka needs about 12,000 pounds of marijuana to supply its traditional medicinal needs. He added that the program currently gets most of its marijuana from crops seized by the courts when illegal cultivators are arrested. But the seized pot is often withered and dried and has lost its therapeutic qualities, thus the need for authorized

Canada  -  Marijuana grown on Vancouver Island could soon be offering pain relief and other benefits to medical patients across Canada.  Horticulturist Eric Nash and his partner Wendy Little operate Island Harvest in the Cowichan Valley, which they say is Canada's first and only production facility of certified organic medical marijuana.

Their operation is licensed and approved by Health Canada, and they have been supplying two patients with marijuana who are registered with the Health Canada program authorizing use of the drug for certain medical conditions, such as multiple sclerosis, spinal cord disease and cancer. Now they are applying for a contract to be a major supplier of marijuana for some of the 2,500 people across the country who are enrolled in the Health Canada program.

There are 1,700 people in Canada who can legally cultivate or produce marijuana for medical purposes. Some are allowed to grow their own, while others can have a designated grower do it for them. The seven-year contract could be a profitable deal for Nash and Little.  While the legal cultivation of marijuana isn't as lucrative as doing it through the black market, it doesn't have the risks of going to jail. Still, the money isn't bad.  The previous government contractor parlayed an initial $5,750,000 deal into $10 million through extensions to the contract. The bids on this new contract close on Sept.  29, and it's expected to take the government months to make a decision.

USA  -  Nearly 1.9 million people were arrested on drug charges in the United States last year, some 872,000 for marijuana offenses, according to the FBI's annual Uniform Crime Report, released Monday.

While overall drug arrest figures declined marginally (down 84,000), marijuana arrests increased by more than 5% and are once again at an all-time high. Drug arrests exceed those for any other type of offense, including property crime (1.61 million arrests), driving under the influence (1.43 million), misdemeanor assaults (1.31 million), larceny (1.17 million), and violent crime (597,000). Of those arrested on pot charges, 775,000, or 89%, were charged only with possession, a figure similar to that for drug arrests overall.

Another 97,000 pot offenders were charged with "sale/manufacture," a category that includes all cultivation or sales offenses, even those involving small-scale violations. Marijuana arrests last year accounted for 47.5% of all drug arrests. Almost three-quarters of marijuana arrests involved people under the age of 30. Marijuana reform organizations naturally zeroed in on the pot arrest figures.

"Most Americans have no idea of the massive effort going into a war on marijuana users that has completely failed to curb marijuana use," said Rob Kampia, executive director of the Marijuana Policy Project in Washington, DC. "Just this summer a new World Health Organization study of 17 countries found that we have the highest rate of marijuana use, despite some of the strictest marijuana laws and hyper-aggressive enforcement. With government at all levels awash in debt, this is an insane waste of resources. How long will we keep throwing tax dollars at failed policies?"

"These numbers belie the myth that police do not target and arrest minor cannabis offenders," said NORML executive director Allen St. Pierre, who noted that at current rates, a cannabis consumer is arrested every 37 seconds in America. "This effort is a tremendous waste of criminal justice resources that diverts law enforcement personnel away from focusing on serious and violent crime, including the war on terrorism."