The Netherlands  -  A solid majority of mayors of Dutch towns that currently have cannabis coffee shops are happy with the way they are working and favor legalizing the entire marijuana supply chain, according to polls conducted by Binnenlands Bestuur magazine and the NRC newspaper.

Under current Dutch policy, marijuana sales are illegal but tolerated in small amounts at licensed coffee shops, but the production of marijuana to supply the coffee shops remains illegal and not tolerated. The Binnenlands poll identified 109 municipalities with coffee shops and elicited responses from the mayors of 88 of them. 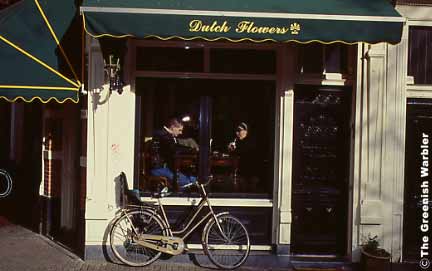 The NRC newspaper survey asked 70 local councils whether they wanted the national government to regulate the supply of marijuana to coffee shops. More than 75% said yes. Meanwhile, the number of coffee shops in Holland continues its slow decline under the conservative government. In 1999, there were 846 shops; in 2005, there were 729; last year, the number was down to 702.

Science: Why cannabis smokers may have a lower cancer risk than tobacco smokers

USA  -  Eleven scientists from the USA and Taiwan summarized data from basic research and a re-evaluation of an epidemiological study by Sidney and colleagues from 1997. Their investigation indicates that cannabis smoke may not increase or even decrease the incidence of cancers associated with tobacco smoke.

While  cannabis smoke contains higher levels of carcinogenic polycyclic aromatic hydrocarbons (PAH) than in tobacco smoke, this may not mean that cannabis smokers are at a higher cancer risk than tobacco smokers, since the level of PAHs is less important than the influence of substances on PAH activation by certain enzymes in the liver. "Not surprisingly, spiking tobacco tar with delta-9-THC markedly reduced carcinogenic activity" in experiments with cancer cells, scientists wrote in an article for the Journal of Psychoactive Drugs.

Czech Republic  -   The possession of a small amount of cannabis for personal use would be punished far less strictly than that of other drugs, according to a change of the law by the lower house of parliament on 11 November.

While the production and sale of drugs can be punished with five to 15 years in prison, if people have a small amount of cannabis on them it is only an offence, under the new  aw. It is yet to be discussed by the upper house and signed by the president into law.

USA/New Mexico  -   Since medicinal cannabis was legalized in New Mexico in 2007, there are about 200 medical cannabis users in the state, according to the Drug Policy Alliance. However, patients have no place to legally purchase the drug.

Canada  -   Municipal elections in British Columbia Saturday saw Vancouver get another in a string of pro-drug reform mayors, while a marijuana reformer was returned to the mayor's office in Grand Forks in the interior, and another prominent reform advocate was elected to the city council in Victoria.

In Vancouver, the civic electoral coalition Vision Vancouver succeeded in placing its candidate, Gregor Robertson in the mayor's seat as well as sweeping eight of 11 council seats. Robertson and Vision Vancouver are strong supporters of the city's pioneering Four Pillars drug policy.

As Vision Vancouver notes in its platform, it will: "Focus on the Four Pillars to deal with drugs in our communities. Prevention, treatment, harm reduction, and enforcement are the most effective tools to make our communities safer. This includes support for InSite, a focus on access to treatment, and expanding prevention education programs."

Meanwhile, in the small interior border town of Grand Forks (pop. 5,000), former mayor and leader in Marc Emery's BC Marijuana Party Bryan Taylor was reelected. Taylor came to drug reform initially around industrial hemp but soon emerged as a leading BC Marijuana Party campaigner in the 2001 elections. He is barred from entering the US, which he can see from his hillside home outside Grand Forks, originally because he was arrested for hemp cultivation ("drug trafficking," in official US-speak).

But even after the Canadian government dropped charges against him, US border control authorities continue to deny him entry, accusing him of "fraud and misrepresentation" if he fails to admit he smokes marijuana and deeming him ineligible to enter the country if he does admit it.

And on Vancouver Island, one of the Canadian drug reformers most familiar to his American counterparts, Philippe Lucas, won a seat on the Victoria city council running as a Green Party candidate. Lucas will be joined by Mayor-elect Dean Fortin, who also supports harm reduction and has vowed to find a permanent location for the city's needle exchange program.