Using a spate of prohibition-related organized crime violence as a backdrop, the Dutch justice minister and the mayors of five southern Dutch cities said late last week that they will move quickly to implement a number of restrictions on the area's cannabis coffee shops, including a "members only" pass system designed to keep foreigners out. But critics said such a move would only increase crime and lessen public order. After five violent incidents in Eindhoven in recent weeks, the mayors called on Justice Minister Ivo Opstelten to get involved, saying their police forces did not have the manpower to "end the drug war in the south of the country," according to Die Telegraaf. 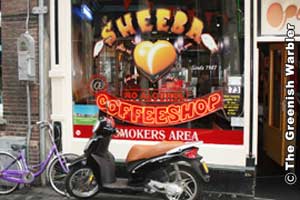 After a Thursday night "emergency meeting," the mayors and the minister said they would send in detectives from the national police to fight the violence, and that they would shut down some cafes, use tax and accounting laws to seize criminal assets, and institute a pass system. The rightist national government wants to institute the pass system nationwide, so its implementation in the south could be viewed as a pilot program for the rest of the country. But it could run into a bump in the road in Brussels. A court case questioning whether barring European Union citizens from Dutch coffee shops constitutes discrimination will be heard next week. Tilburg University researcher Nicole Maalste told the newspaper Trouw Monday that creating a pass system that bars foreigners from the coffee shops would not reduce violence, but increase it.

Tourists who want to buy drugs will simply go to the street dealers to buy them, and many Dutch nationals do not want to be registered marijuana users, she said. "Which problem do we want to solve with the pass?" she asked. "Eindhoven does not have a problem with drugs tourism."

The Portuguese government has garnered well-earned plaudits for its nine-year-old policy of the decriminalization of drug possession, first last year from Glenn Greenwald in a White Paper commissioned by the Cato Institute, and just last month in a new academic study in the British Journal of Criminology. But while they applaud the Portuguese government for embracing decriminalization, some drug user advocates there are saying there is more to be done.

Portugal broke new ground back in July 2001 when it decriminalized the possession of up to a 10-day supply of all illicit drugs. Under the new policy, drug users caught with drugs are not arrested, but are instead referred to regional "committees for the dissuasion of addiction." It is reported that the harms associated with drug use had decreased under decriminalization.

The Obama administration has warned Oakland over the licensing of four giant medical marijuana farms, saying the plan is in violation of state and federal law and could trigger multiple legal actions against the city.

Officials from the Justice Department’s civil division and the U.S. attorney’s office in San Francisco delivered the blunt message to Oakland City Attorney John Russo, according to two officials who asked not to be identified because they were not authorized to talk about the meetings. At issue is an ordinance, approved by the Oakland City Council last July, to license four industrial facilities to cultivate and process medical marijuana and sell the product to dispensaries around the state.

Science: THC effective in the treatment of schizophrenia in four case reports

In a letter to the editor of the Journal of Clinical Psychiatry doctors of the Rockland Psychiatric Center in Orangeburg, New York, USA, reported of four more patients with schizophrenia not responding to other medication, who improved considerably with a treatment by THC. The physicians had already published a similar experience with four other patients in 2009.

This time they tried dronabinol (THC) for 8 further patients in the hospital. They all suffered from severe psychosis refractory to standard medication and reported of a positive previous experience with cannabis. There were four responders with good improvement with THC and four non-responders. None of the four non-responders had a worsening of their psychosis or other effects. Authors noted, that they "simply had no change with the addition of dronabinol." They write: "We suspect that in a small subsect of these [psychotic] patients, the etiology of their psychosis is low endogenous endocannabinoid brain function, so that cannabinoid stimulation would improve their behaviour."

According to research from Australia with 80 clients of a methadone maintenance program of whom 52.7 per cent suffered from post traumatic stress disorder (PTSD) cannabis "may be used to self-treat  certain PTSD symptoms, supporting the self-medication hypothesis."