In a bid to stop the flow of tens of thousands of Belgian, French, and German marijuana consumers into Dutch border town cannabis coffee shops, the Dutch government announced this week that is investing 150,000 Euros ($213,000) in a pilot membership card program for coffee shop clients in Maastricht. The program was first proposed earlier this year by Maastricht Mayor Gerd Leers.

The foreign marijuana consumers have caused various public safety and public nuisance problems, from congested automobile traffic to public urination and attracting street drug dealers. At least two other Limburg province border towns, Roosendaal and Bergen op Zoom, have responded to the problem by saying they will close down all their coffee shops.

Under the membership card scheme, only card-carrying coffee shop members could purchase cannabis, and purchased would be limited to three or five grams a day. Such a move would presumably deflate the number of "impulse" drug tourists.

The federal government is also spending about $7 million for various local councils to address various problems associated with coffee shops, where users can purchase up to five grams of cannabis without fear of arrest. Ministers want to reduce the number of large coffee shops and reduce the involvement of organized crime.

Snoop Dogg got a big gift from a fan during his performance at Lowlands a real Cannabis plant. When he left lowlands festival and went back to his 5 star hotel " Okura" he took the present with him. Snoop loves the Dutch green he never made this a secret. 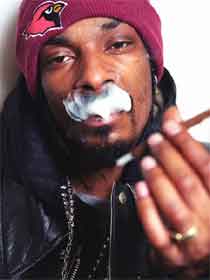 USA: Denver to Move to $1 Fine for Pot Possession?

Denver could soon see a maximum $1 fine - the lowest in the country - for simple marijuana possession. The city's Marijuana Policy Review Panel voted 6-2 Wednesday to recommend that the city do just that. The panel was created by Mayor John Hickenlooper in December 2007 to comply with the will of voters who had just passed an ordinance making adult marijuana possession offenses the lowest law enforcement priority.

That vote came after a 2005 vote to legalize marijuana in the city, a vote that was ignored by local law enforcement and prosecutors, who instead charged offenders under state law.  In May 2008, the city attorney's office set the fine for possession at $50 and arranged for payment to be made by mail instead of at a court appearance.

Now it will be up to the city's presiding judge to decide whether to go even further and set the fine at $1. "By setting the fine at just $1, we are sending a message to Denver officials that the era of citing adults for using a less harmful drug than alcohol is over. It's simply not worth the city's time or resources," said panel member and SAFER executive director Mason Tvert, who coordinated the successful Denver marijuana initiatives.

The decriminalization of drug possession has gone into effect for 150 million Latin Americans. As part of a broader bill, Mexico (pop. 110 million) decriminalized the possession of small amounts of all drugs through the legislative process.

Four days later, the Argentine Supreme Court declared unconstitutional that country's law criminalizing drug possession. While the Argentine case involved marijuana possession, the ruling clears the way for the government to draft a new law decriminalizing all drug possession. The shift in policies toward drug users in the two countries is a dramatic indication of the seismic shift in drug policy already well underway in Latin America.

Colombia's high court declared the law against drug possession unconstitutional in 1994. Brazil has had a version of decriminalization since 2006 - users cannot be imprisoned, but can be forced into treatment, educational programs, or community service - and Uruguay now allows judges to determine if someone in possession of drugs intended to use them or sell and to act accordingly. Movement toward decriminalization is also underway in Ecuador. Under the new Mexican law, consumers may own 5 grams of cannabis for example.

A massive DEA operation featuring dozens of heavily armed agents and at least four helicopters ended with the arrests of five people in California's Lake County last week. According to California NORML, the arrests are believed to be the first since the Obama administration announced it would not target medical marijuana providers in states where it is legal unless they violated both state and federal law.

The DEA seized 154 marijuana plants from Upper Lake resident Tom Carter, and arrested him, former UMCC dispensary operator Scott Feil and his wife, Steven Swanson, and Brett Bassignani. Carter is a registered medical marijuana patient and provider, and his wife, Jamie Ceridono, told the Lake County News he was growing for several patients and his grow was legal under state law.

While the Obama administration has announced it would not go after law-abiding medical marijuana providers, the DEA has conducted at least two raids against providers in San Francisco and Los Angeles, although there have been no arrests in those cases. The administration has not announced any changes in federal laws or regulations around medical marijuana, and Bush appointees continue to serve in the DEA and the US Attorney's Office of Northern California, which is prosecuting the case.

In a 2-1 decision last Friday, the Alberta Court of Appeals ruled that Calgary police violated Canadian privacy protections when they persuaded a utility company to attach a device to create a record of electricity usage in a home where they suspected marijuana was being grown.

The case is Crown vs. Gomboc. Daniel James Gomboc was arrested and convicted of marijuana cultivation after Calgary police on another call noticed his home showed signs that a marijuana grow was taking place. After spotting suggestive evidence, Calgary police then went to the utility provider Enmax without a warrant and persuaded it to attach a digital recording amp-meter (DRA) to Gomboc's home.

The meter monitored Gomboc's power usage for five days, and police used the results to obtain the search warrant that resulted in his arrest and subsequent conviction. The decision could be a precedent that will lead to more reversals, Gomboc's attorney, Charlie Stewart, told the Calgary Herald. "It's interesting to think of all the people who have pleaded guilty or been convicted under these circumstances," said Stewart. "It's a question of the legitimacy of the search."

Science: Cannabis use may protect the brain from some consequences of alcohol use.

Authors noted that "binge drinkers who also use marijuana did not show as consistent a divergence from non-users as did the binge drink-only group." They said that it is "possible that marijuana may have some neuroprotective properties in mitigating alcohol-related oxidative stress" or induction of toxic cell death.