The Netherlands: Maastricht - On 1 April a district court in Maastricht overturned a municipal decree stating that cannabis bars must refuse foreigners as clients. French, Belgians and Germans must now be allowed in. A distinction by 'residency' is not permitted on grounds of the ban on discrimination in Article 1 of the constitution unless there are reasonable, objective grounds justifying it. There was no question of this here, the judge found. In the past already, other Dutch courts had ruled the same. 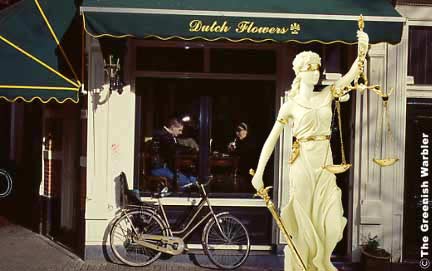 Thailand: An Australian was arrested in Thailand after a doctor allegedly discovered 65 plastic bags filled with $31,608 in hashish in his stomach, police said. John Paul Jones, 51, was visiting the island of Ko Samui when he was rushed to the hospital after complaining of severe stomach pain, the Bangkok Post reported. An X-ray of Jones's intestine showed a sausage-like string of objects that were surgically removed and identified as 800 grams of hashish. "Before the operation, Mr Jones looked nervous and asked whether police would be notified. We found 62 black objects obstructing his small intestine. Three packs had burst," Dr Worapob said. It is reported that it took doctors two hours to remove the drugs, which were concealed in condoms and probably smuggled into Thailand from India or Pakistan. Authorities said Jones would be held for questioning and charges.

Germany: Lead poisoning due to adulterated cannabis. In recent months several cases of lead poisoning were observed  in Germany, mainly in the region of Leipzig. Some cases also occurred in other places, such as Munich and Vienna, Austria. According to a report published in the New England Journal of Medicine 29 patients were admitted to four different hospitals in the greater Leipzig area with classic signs and symptoms of lead intoxication, which had not occurred in Germany in recent decades. All patients were regular cannabis users and lead was detected in cannabis of some patients. A criminal investigation was begun to find the causer of the lead
adulteration. Lead was obviously added to the drug by drug traffickers to increase weight and profit. An anonymous screening program for cannabis users was started and further 95 subjects were found, who had blood levels of lead that required treatment. The Drug Commissioner of the Federal Government, Sabine Baetzing, issued a warning on cannabis that may be adulterated by lead. Several German organisations called for the possibility for cannabis users to grow their own for personal use to reduce the risks of cannabis use. The article is available at: http://content.nejm.org/cgi/content/full/358/15/1641

UK: Gordon Brown faces dilemma over cannabis classification, whether to overrule his ownpanel of experts and increase the penalties for being caught in possession of cannabis. The Advisory Council on the Misuse of Drugs is understood to have
decided at a private meeting that it will not recommend tightening the law on the drug. The decision presents a potential embarrassment for the Prime
Minister, who earlier this week said that he regarded cannabis use as not just illegal but also unacceptable. It is understood that 20 out of the panel's 23 experts decided on
Wednesday that there was not sufficient new scientific evidence to justify a change. If Mr Brown decides to press ahead with reclassification, he will risk becoming only the second Prime Minister to over-rule the council, which is a statutory non-departmental public body dating from 1971. The Conservatives said that the Government "need a long spell in rehab" over its apparent dithering over the whether to increase the
penalties for possessing cannabis. Conservative leader David Cameron said: "There are all sorts of cannabis on the streets today. Skunk and super skunk are incredibly
powerful and can lead to people having all sorts of mental health problems. "The Conservative Party has a very clear view that it should be class B. People have had enough of reviews and the Prime Minister should stop dithering and get on and make a decision.

USA: Medical Marijuana - A bill that would allow some Minnesota patients to use medical marijuana is headed for a House floor vote after easily passing the House Ways and Means Committee Wednesday. The bill, SF 345, passed the Senate last year, so the House vote is the only obstacle remaining before the bill lands on the desk of Gov. But the governor remains an obstacle as well. Pawlenty has signaled he will veto the bill. A Pawlenty spokesman reiterated the veto threat Wednesday, saying the bill must include provisions to make it palatable to law enforcement. The bill would allow qualifying patients to possess up to 2.5 ounces of marijuana and to obtain it from organizations created to dispense the drug. Those nonprofits can grow up to 12 plants per patient. Patients and dispensaries would be registered with the state. Twelve states -- Alaska, California, Colorado, Hawaii, Maine, Montana, Nevada, New Mexico, Oregon, Rhode Island, Vermont and Washington -- presently allow medical use of marijuana. Medical marijuana bills are now under consideration in Illinois and New York, and an initiative is expected to appear on Michigan's November ballot.

Science: THC effective in obsessive compulsive disorder according to case reports. Researchers from Berlin, Germany, reported two cases of obsessive compulsive disorder successfully treated with oral THC to the American Journal of Psychiatry. Both patients, a 38-year-old woman and a 36-year-old man, were refractory to
conventional treatment such as neuroleptics and antidepressants. After the first patient had informed her physicians that smoking of cannabis relieved her symptoms, 10 mg THC three times daily was added to the ongoing treatment with clomipramine,
which resulted in a significant decrease of symptoms within 10 days. The second patient received dronabinol, which was slowly increased up to a dose of 10 mg THC twice daily, also in addition to his ongoing treatment. A significant reduction of symptoms was observed within two weeks. Obsessive compulsive disorder is a psychiatric anxiety disorder most commonly characterized by a subject's obsessive, distressing, intrusive thoughts and related compulsions (tasks or "rituals") which attempt to neutralize the obsessions. Many patients do not respond well to conventional medications, which also may cause significant side effects. Based on the observation that THC is effective in treating tics in Tourette's syndrome and the observation that Tourette's syndrome may be genetically linked to obsessive compulsive disorder, researchers hypothesized that THC might also reduce their symptoms.