The Hague - A Dutch appeals court on Tuesday handed down a landmark
ruling allowing an MS patient to grow cannabis for his personal use to alleviate the symptoms of his illness. Although it is legal in the Netherlands to sell and consume small amounts of cannabis and hashish in licensed cafes, growing and trafficking the drugs are banned. Tuesday's ruling is the first time Dutch authorities have made an exception on the ban on growing cannabis for personal medical use. The case before the appeals court in Leeuwarden in the northern Netherlands involved 51-year old Wim Moorlag, who suffers from multiple sclerosis, and his wife Klasiena Hooijer, who grew cannabis. They cultivated just enough to meet Moorlag's daily use of three grams, namely some 300 grams per harvest every 15 weeks.

Afghanistan: Canadian troops fighting Taliban militants in Afghanistan have stumbled across an unexpected and potent enemy -- almost impenetrable  forests of marijuana plants 10 feet tall. “The challenge is that marijuana plants absorb energy, heat very  readily. It's very difficult to penetrate with thermal devices. And as a result you really have to be careful that the Taliban don't  dodge in and out of those marijuana forests," General Rick Hillier  said in a speech in Ottawa, Canada. "We tried burning them with white phosphorous - it didn't work. We tried burning them with diesel - it didn't work. The plants are so  full of water right now ... that we simply couldn't burn them," he said. Even successful incineration had its drawbacks: "A couple of brown plants on the edges of some of those [forests] did catch on fire. But a section of soldiers that was downwind from that  had some ill effects and decided that was probably not the right  course of action," Hiller said dryly. In other words: The soldiers got stoned! 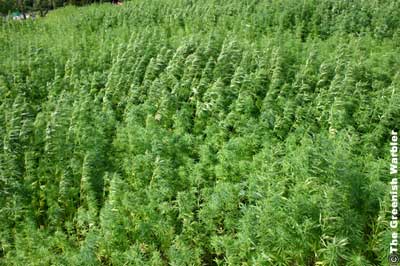 It is a generally known fact that singer George Michael likes a spliff - but soon viewers can watch him in action, eulogising cannabis for keeping him sane and happy since he first came across it 20 years ago. He openly smokes a joint on camera before a concert in Madrid, admitting: "If I'd drunk as much as I'd smoked - my God I'd look like Keith Richards. But this is the only drug I've ever thought worth taking... this stuff keeps me sane and happy." However, he also admitted the drug could have negative effects and that he regretted taking other stimulants: "It can be a terrible, terrible drug. You've got to be in the right position in life to take it. You've got to have achieved most of your ambitions because it chills you out to such a degree you could lose your ambitions."

San Francisco - Medical marijuana advocate Ed Rosenthal was granted release on a $50,000 personal recognizance bond while he awaits a federal trial in San Francisco on drug cultivation and money laundering charges. The bond was set by U.S. Magistrate Nandor Vadas in San Francisco and was halfway between requests by prosecution and defense lawyers. Prosecutors had asked for a $100,000 bond while Rosenthal's attorney asked that he be released on his own recognizance.
Rosenthal's next court date is a status conference on Oct. 25 before U.S. District Judge Charles Breyer, the judge who will preside overhis retrial.

Police against prohibition: At a recent Santa Monica city council meeting about Measure Y, a ballot initiative that would make adult marijuana use the police department's "lowest priority," activists brought out a unique speaker: A retired New Jersey state cop who is calling for the legalization of drug use. Lt. Jack Cole heads up an organization called Law Enforcement Against Prohibition, LEAP, which boasts 5,000 members from the law enforcement field nationwide. Cole spoke up for the Santa Monica measure and suggested that law enforcement would better serve the public by spending more of its time and resources on more serious crimes. Cole believes a revolt is growing against the federal government's war on drugs, both inside law enforcement and among the general public. "I think legalization will be sooner rather than later," says Cole. Over the past three years Cole and other retired cops have been traveling the country speaking to Rotary clubs, church groups and law enforcement conferences. Hearing this message from police officers makes a huge difference: Cole estimates about 80 percent of the people he speaks to end up agreeing with him.