The Netherlands: Call for legalisation louder and louder

The Netherlands: Call for legalisation louder and louder

The Netherlands:  The current fight against drugs costs much too much money and has no impact whatsoever, say Judge and prominent professor of criminal law
Theo de Roos and former Amsterdam chief of police Eric Nordholt. “Nobody within the justice system is glad that they have to deal with this mess”, says de Roos, who is professor of criminal law, solicitor and judge. “That applies to police chief commissioners, as well as colleague judges. They are confronted with yet another drug case, yet another addict. I think that the majority wants another approach.” De Roos pleads for legalization or regulation of drugs. Eric Nordholt, former Chief-Commissioner the Amsterdam police force agrees with him: “In the forty years which I have served at the police force, the problem has become only more terrible. Everyone within the police force and judicial authorities knows that they have lost the fight. It is a lunatic situation, and there is no solution like this. A commission of the United Nations proclaimed in
1998, that drug production - and use - in ten years time would be considerably surpressed. A report published by the European Union last Friday reveals  that the results are disastrous. There are more drug deaths and cocaine users then ever and a record number of cannabis smokers.”

USA: Presidential hopeful Barack Obama confessed to a group of teens this week at Manchester Central High School in Manchester, New Hampshire that when he was their age he used to be a dope smokin' fool. Barack outed himself as being a former Lucy in
the Sky with Diamonds member of his high school bong brigade. He put the high in high school. BO's mea culpa immediately accomplished a few things: It solidified Snoop Dogg's, Willie Nelson's and Montel's votes in the primaries, and it also sent some of my conservative compadres into a five alarm hissy fit. Yep, several of my VRWC buddies were popping blood veins in their foreheads, stating that Obama's admission could encourage young 'uns to use drugs, and because of this he was "unwise" in telling the little squabs that he formerly sought solace in a thick cloud of sinsemilla. 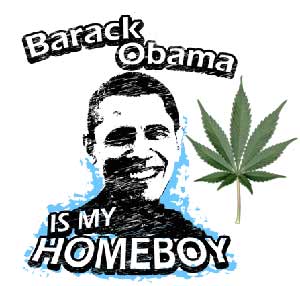 Canada: Two valley grow-op homes seized and sold. Two residential properties in Abbotsford used to house substantial marijuana grow-ops are the latest assets to be captured under the BC Civil Forfeiture Act's net, Solicitor General John Les and Abbotsford Police Chief Ian MacKenzie announced Nov.  22. "The act hones in on one of the main factors we know motivate many lawbreakers - profit," said Les. "Where it has been proven in civil court that property has been acquired as a result of unlawful activity, or has been used for unlawful activity, the Supreme Court can step in and order forfeiture of the property." Almost 4,000 marijuana plants were found by the Abbotsford Police Department's Drug Squad at a residence on Simpson Road and at another residence on Willet Road. The houses have now been sold, mortgages paid off and $230,000 paid to government under the act.

USA: Long Beach has become the latest city caught in a crossfire between the state and federal governments over medical marijuana. Last week, federal Drug Enforcement Agency (DEA) officials raided the Long Beach Cannabis Club, which is located downtown (near a new condominium project and the CityPlace center).  Agents seized 33 kilos of marijuana, about $10,000 cash and arrested the proprietor, Samuel Matthew Fata. Since the raid, the club has remained closed.  But there are an estimated 10 other clubs operating in Long Beach, according to a list put together by the Long Beach City Prosecutor's office. Similar clubs sprang up throughout the state in the wake of voters adopting Proposition 215 in 1996 ( followed by subsequent court battles that ultimately upheld the constitutionality of the law ).

USA: Four months after Yuba County supervisors deferred a decision to consider medical marijuana identification cards, the issue is back on their agenda. In August, board members agreed to refrain from making a decision until legal counsel could review state and federal laws on medical marijuana.  Tuesday, supervisors will consider approving a program that will offer patients the option to obtain a statewide ID to medically approved users. County Counsel Dan Montgomery said approval would bring the county into compliance with state law. "It's necessary to comply with state law, so that's what we will be doing with this," Montgomery said. If the program is approved, Montgomery said there will be some costs to the county for implementation. "We will be able to charge a fee, so hopefully that will be able to offset some of the cost," he said.