The Dutch are among the lowest users of cannabis in Europe despite the Netherlands' well-known tolerance of the drug, according to a study published on 5 November. Among adults in the Netherlands, 5.4 percent used cannabis, compared with the European average of 6.8 percent, according to an annual report  by the European Monitoring Centre for Drugs and Drug Addiction.

A higher percentage of adults in Italy, Spain, the Czech Republic and France took cannabis last year, the EU agency said, with the highest being Italy at 14.6 percent. Countries with the lowest usage rates, according to the Lisbon-based agency, were Romania, Malta, Greece and Bulgaria.

Cannabis use in Europe rose steadily during the 90s and earlier this decade, but has recently stabilised and is beginning to show signs of decline, the agency said. "Data from general population and school surveys point to a stabilising or even decreasing situation," the report said. 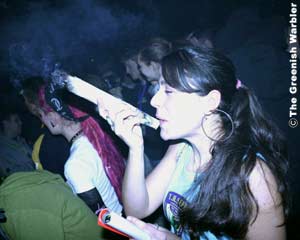 Big and booming? No, The Netherlands are among the countries with the lowest number of cannabis users in Europe!

Voters approved a referendum making Maine the fifth state to allow cannabis dispensaries, but advocates of the medical use of cannabis say it won't become like California, where hundreds of  cannabis shops have opened. California, Colorado, New Mexico and Rhode Island allow for places where patients can legally buy cannabis.

Maine voters gave their approval to the measure on 3 November with 59 per cent in favour. Referendum opponents pointed at Los Angeles as proof that cannabis outlets are a bad idea. There, the district attorney has vowed to close shops that are selling the drug to people who don't qualify.

However, Maine law requires that dispensaries be licensed by the state, while California law does not. Maine law also narrowly defines medical conditions for which patients can be prescribed cannabis, while California allows doctors to recommend it for virtually any ailment.

An April Field poll found that 56% of respondents supported legalization. But that support came in the context of a polling question about legalizing and taxing marijuana in the context of California's ongoing budget crisis. In that poll, respondents said they favored "legalizing marijuana for recreational use and taxing its proceeds." While the poll may be a shot across the bow for legalization initiative organizers, it may not accurately predict how such a campaign will fare, Probolsky said.

"This doesn't test the push messages -- closing the state budget gap versus the public safety messages," he said. "You need to test half a dozen of those pros and cons to see where the initiative lies." When measured by party affiliation, only 25% of Republicans supported legalization, compared to 45% of Democrats and nearly 48% of voters who declined to state a party preference. Voters over 65 were most likely to oppose legalization, with 56% saying prohibition should continue. But that was only one point higher than the 55% of 18-to-34-year-olds.

Residents of the Colorado ski town of Breckenridge overwhelmingly voted to legalize the possession of small amounts of marijuana Tuesday. The measure passed with 73% of the vote. That means as of January 1, people in Breckenridge can legally possess up to an ounce of marijuana under local ordinance.

The measure also legalizes the possession of marijuana paraphernalia. "This votes demonstrates that Breckenridge citizens overwhelmingly believe that adults should not be punished for making the safer choice to use marijuana instead of alcohol," said Sean McAllister, Breckenridge attorney and chair of Sensible Breckenridge, a local project of the statewide marijuana law reform group Sensible Colorado.

Measure 2F was placed on the ballot when over 1,400 local supporters signed a petition supporting the reform measure. Under Colorado state law, possession of up to an ounce is decriminalized and punishable by a $100 fine. But Breckenridge police will "still have the ability to exercise discretion," said Chief Rick Holman. "It's never been something that we've spent a lot of time on, so I don't expect this to be a big change in how we really do business," he told the Summit Daily News.

USA/California: Pot use and arrests rising in California.

Marijuana arrests in California are increasing faster than the nationwide rate, and African Americans are being booked for pot-related crimes much more often than whites, a new report says. But despite the rise in arrests and in the seizure of marijuana plants, use of pot in California has increased slightly, said the report, part of a nationwide study released Thursday by a Virginia researcher.

In both California and the United States as a whole, "we keep arresting more and more people, but it's not having a deterrent effect," said Jon Gettman, an adjunct assistant professor of criminal justice at Shenandoah University in Winchester, Va. Nationally, Gettman said, marijuana arrests have doubled since 1991, but marijuana use is unchanged. Gettman is a former director of the National Organization for the Reform of Marijuana Laws.

Gettman's report came a day after state officials announced that the state-federal Campaign Against Marijuana Planting had seized a record 4.4 million pot plants in California this year, up from 2.9 million in 2008. Gettman's study is based on state and FBI arrest records and other government data from 2003 through 2007. It said California officers arrested 61,375 people on marijuana charges in 2003 and 74,024 in 2007, an average increase of more than 5 percent per year. Eighty percent of the arrests in 2007 were for marijuana possession, the report said. Nationwide, the annual increase during the same period was just under 4 percent, the report said, although California's marijuana arrest rate, compared to its population, remained among the nation's lowest.

The report also found a large racial discrepancy in arrests. African Americans were about 20 percent more likely than whites to use marijuana in 2007, but the arrest rate for blacks on marijuana charges was nearly 270 percent of whites' arrest rate, the report said. By geographic zone, the state's northernmost counties, which include the prime marijuana-growing areas of Humboldt and Mendocino counties, ranked 12th out of 350 regions in the nation in pot use by their residents. A region consisting of San Francisco, Marin and San Mateo counties ranked 15th.

According to research at Leiden University, The Netherlands, the commercially available Volcano vaporizing device generated much less by-products than smoked cannabis.

The vaporizer heats the cannabis to 170-230 degrees Celsius avoiding combustion of the material.