The best news first: Smoking “the Green” doesn't cause lung cancer!
A new study by researchers at the UCLA David Geffen School of Medicine (USA)
has found no link between marijuana smoking and lung cancer.
While smoking cigarettes greatly increases the risk of lung cancer, smoking marijuana did not appear to have any effect, the study found.
However, at the end of May it became clear that free medical distribution of
“the Green” causes another problem: Police activities.

The German cannabis pharmacy, a web-based anonymous institution (www.hanfapotheke.org) organising the free transfer of medical cannabis from donators to beneficiaries, had operated without any problems since its begin in August 2005.
Now Swiss citizen Andre Fürst who is officially registered as proprietor of the website and housing the server, but not further involved in the project, was brought to the police station and debriefed about the pharmacy. He stated that
Dr. Franjo Grotenhermen, the chairman of the IACM, would be the i
nitiator of the project. The cannabis pharmacy denied this, stating that
Dr. Grotenhermen would merely be a member of the solidarity circle.
Fürst also stated that the Swiss police had checked him at the request of German authorities… we will see what happens next.

But there is also good news from Switzerland. The city of Bern intends to launch a pilot project on the controlled sale of cannabis – although the Swiss government and the Canton of Bern are strictly against it, claiming that such a project would infringe upon Swiss law. The municipal council nevertheless has announced to proceed with its plans. Maybe it feels encouraged by the fact that already in February, the 100,000 signatures needed for a referendum on the decriminalisation of cannabis, including cultivation and sale, had been collected
in Switzerland. While, based on a positive referendum, a Swiss coffee shop market could be established in the future, in the Netherlands political action presently
is all about regulation of the existing market.

Maastricht plans to move up to half of the coffee shops to the Belgian border, following the example of Venlo which relocated two coffeeshops near to the German border. But officials in Belgium, where cannabis remains illegal, say the plan will completely derail their own zero-tolerance policy on drugs. At the end of May, Dutch MPs visited the Belgian border region to hear local concerns. They were told that Dutch soft drug cultivators were increasingly targeting hard-up Belgian farmers, in areas near the border, and offering them cash in exchange for use of part of their land. 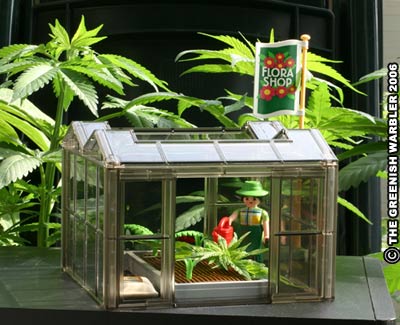 "Belgian farmers are more and more seduced to grow weed"

internationally on the rise: Also an increasing number of Spaniards with terminal and/or chronic diseases are using cannabis therapeutically, according to a report published earlier this week in El Sur newspaper. Use of cannabis for medicinal purposes among the Spanish population may be increasing by as much as 20 percent annually, the report said.
However, Spain still prohibits the sale of cannabis so that the medicine is not legally available there.

In Canada, the former government had intended to make marijuana legally available in the pharmacies, but the new conservative government discarded all cannabis liberalisation plans, also including the decriminalisation of possession. And shortly after it had come to power in January 2006, it tightened the screws on the Canadian cannabis industry what resulted in the crackdown on overgrow.com and other websites, also cannabis cafes and grow shops were raided in the aftermath. The Canadian seed banks now also feel uncomfortable and some have already stopped shipping seeds beyond the country.

In Mexico, there was a glance of hope when in April both chambers of the parliament had passed a bill that would have legalized the possession of small amounts of several drugs including cannabis (5 grams). But already a few days later, under intense U.S. pressure, President Vicente Fox refused to accept the law, stating that it should be changed, "to make it absolutely clear that in our country the possession of drugs and their consumption are and continue to be crimes."