Switzerland  -  On Sunday, 63% of Swiss voters rejected an initiative which would have decriminalised the consumption of marijuana and growing the plant for personal use, while they finally backed Switzerland's programme of legal heroin drop-in centres. 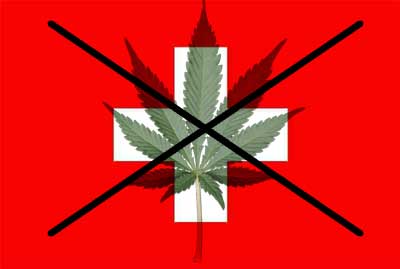 The Netherlands I: Amsterdam is being forced to close 43 of its 228 cannabis-selling cafes to meet national regulations, Amsterdam mayor Job Cohen announced.

The cafes, known as coffee shops, have to be closed down by the end of 2011 because they are less than 250 meters from high schools. The city currently has some 228 outlets selling marijuana under license. The measure stems from national government rules on moving coffee shops away from schools attended by children over the age of 12. Last year, Rotterdam told 18 cafes they had to close down because of this rule. One of those set to vanish from Amsterdam is the famous Bulldog cafe on the city’s Leidseplein which is housed in a former police station and was opened over 20 years ago. The leader of the governing Christian Democratic Party, Pieter van Geel, even said all the coffee shops should be closed.

Dutch mayors meeting at a weekend "Cannabis Summit" are seeking to solve the backdoor problem, as well as address the conservative governing coalition's efforts to restrict or even shut down the famous coffee houses. The summit was called by Maastricht Lord Mayor Gerd Leers last week after the city councils of Roosendaal and Bergen op Zoom decided to shut down all the coffee shops because of problems associated with masses of pot-buying visitors from neighboring Belgium, France, and Germany, which lack regulated marijuana sales.

More than three-quarters of the 40 mayors in attendance agreed that marijuana should be grown under license for wholesale purchase by the coffee houses and, ultimately, retail sale to consumers. But while there is broad agreement on licensing grows, just how they would come about remains a matter of contention. According to Dutch News, Eindhoven Mayor Rob van Gijzel and his city council are prepared to operate their own grow as a "monitored pilot scheme" to see if licensed growing reduces drug-related crime.

The Tilburg city council said it wanted to start a "cannabis market garden" to supply local shops. But Amsterdam Lord Mayor Job Cohen told London's Telegraph newspaper that while he was in "full support" of the coffee shop system, Eindhoven's plan to involve the city council in marijuana growing was going "a little too far." Instead, he said he would prefer to see licensed private growers closely monitored by the police.

On Sunday, Health Minister Ab Klink somewhat surprisingly said that while the licensed grow plan in Eindhoven would conflict with the policy of the conservative ruling coalition, he was prepared to look closely at the plan and discuss it with the rest of the cabinet. While the Christian Democrats and Christian Unity parties are opposed to legal production for the coffee shops, the coalition's Labor Party has called for parliamentary debate on the issue.

The Dutch government proposed the ban in April, citing the dangerous behavioural effects of magic mushrooms following the death of a French teenager who jumped from an Amsterdam bridge in 2007 after consuming the hallucinogenic fungus. "The use of magic mushrooms has hallucinogenic effects.  It is proven that this can lead to unpredictable and therefore risky behaviour," the Dutch Health Ministry said in a statement.

Researchers from Ottawa (Canada) say they have located the world's oldest stash of marijuana, in a tomb in a remote part of China. The cache of cannabis is about 2,700 years old and was clearly "cultivated for psychoactive purposes," rather than as fibre for clothing or as food, says a research paper in the Journal of Experimental Botany.

The 789 grams of dried cannabis was buried alongside a light-haired, blue-eyed Caucasian man, likely a shaman of the Gushi culture, near Turpan in northwestern China. The extremely dry conditions and alkaline soil acted as preservatives, allowing a team of scientists to carefully analyze the stash, which still looked green though it had lost its distinctive odour. "To our knowledge, these investigations provide the oldest documentation of cannabis as a pharmacologically active agent," says the newly published paper, whose lead author was American neurologist Dr. Ethan B. Russo.

Japan: Officials fret over marijuana use at universities.

Marijuana is steadily infiltrating university campuses, sparking concern among administrators about how to stem growing drug abuse among students. Scores of students at renowned universities, including Keio and Waseda in Tokyo, have been arrested this year for allegedly possessing or dealing the illegal drug.

Part of the reason, critics say, is that people feel less inhibited about getting their hands on marijuana than on other illegal drugs, such as amphetamines. The critics also point to the relative ease with which cannabis seeds and information on how to grow the plants can be obtained on the Internet. In a recent case, five Hosei University students were arrested on suspicion of possessing marijuana. They reportedly told police they had repeatedly smoked and dealt the drug in a university library.

According to the National Police Agency, 1,202 people were implicated in violations of the Cannabis Control Law between January and June, up 12 percent from the same period last year. Of them, 65 percent were aged 29 or younger and university students accounted for 3.5 percent. Cannabis seeds without narcotic properties fall outside the Cannabis Control Law and are sold online and in import shops for edible use.

USA/California: Medicinal marijuana caregivers may be prosecuted as drug dealers, according to a new state Supreme Court ruling.

The ruling upholds a Santa Cruz County Superior Court jury decision that found medicinal marijuana user Roger Mentch, 53, guilty of cultivating and possessing marijuana for sale.  Mentch, who was arrested by sheriff's deputies in 2003, claimed he was a caregiver for five medicinal marijuana patients.  He also opened the Hemporium, a medicinal marijuana collective in Felton, where he sometimes sold the pot he grew.

"I was a caregiver with honest intent," Mentch said. When jurors found him guilty and he was sentenced to three years probation, Mentch appealed the decision on several points, including that jurors were not properly instructed about medicinal marijuana caregivers.  The three-member 6th District Court of Appeals agreed with him and overturned the jury's ruling.  However, the seven justices on the state Supreme Court reached a different conclusion.

The court ruled primary caregivers must have an established care-giving relationship with the patient prior to providing that patient with medicinal marijuana, according to the decision. Also, primary caregivers can only provide pot to those patients, not sell the drug to other medicinal users or collectives.  Therefore, Mentch's sales to the Hemporium and another collective in the county amounted to dealing drugs on a street corner, according to the court ruling. Mentch, who continues to operate the Hemporium, said he still has hope his case will turn out differently.  The court system apparently only addressed three of 10 issues brought up on appeal and he believes the case will be returned to a lower court for further analysis.