According to a proposal by the Health Committee of the parliament (Nationalrat) of 4 May 2006 the Swiss Parliament decided on 20 December to relax prohibition of the medical use of natural cannabis products. The decision allows the Health Ministry to issue exemptions for the medical use of cannabis and the approval of cannabis-based medicines. The proposal of the Health Committee says: "The committee suggests that with a certificate of exemption by the BAG [Federal Department of Health, Health Ministry] a limited medical use of narcotics of the type cannabis should be made newly possible in individual cases. At the same time, the substance can be subjected to the pharmaceutical evaluation by the Swiss Pharmaceutical Institute, once a corresponding narcotic will be used as an active agent in a medicine, which possesses an approval by the Swiss Pharmaceutical Institute. Physicians then can prescribe this drug for the approved indication."

Australia: The Howard Government is pushing for a ban on the sale of marijuana
bongs throughout Australia. The Federal Parliamentary Secretary for Health, Christopher Pyne, said the Government believed the legal sale of bongs sent a tacit
signal that the Government approved the use of such drugs. Mr Pyne's call follows a landmark report this week from former Federal Police Commissioner Mick Palmer which found that smoking cannabis, particularly by young people, substantially increases the risk of mental illness and worsens existing mental health conditions. Bongs can usually be found for sale in tobacconists and sometimes even service stations. They feature a small bowl in which marijuana is placed. The smoke is then inhaled through cooling water in the base of the pipe to deliver the "hit". There is no age limit on the sale of such drug paraphernalia, Mr Pyne's demand for a ban follows a meeting of the National Cannabis Strategy Group six months ago that called for "closer and more appropriate regulation of drug paraphernalia". 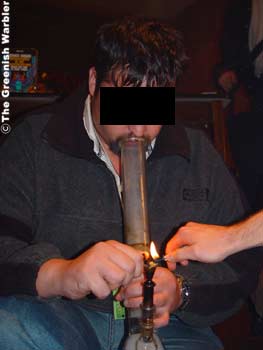 USA: Marijuana is the most valuable cash crop in the United States, worth more to its growers than corn and wheat combined, according to a new report by a leading American drug reform lobbyist that cites the US government's own figures. Decades of government efforts to crack down on both the cultivation and consumption of pot have had a counter-productive effect, since even the most conservative government estimates suggest domestic marijuana production has increased tenfold in the past 25 years. It is the leading cash crop in 12 states, and one of the top five crops in 39 states. The report's author, Jon Gettman, says it is "larger than cotton in Alabama, larger than grapes, vegetables and hay in California, larger than peanuts in Georgia, and larger than tobacco in South and North Carolina". California accounts for almost a third of all US production. It is a major economic force in the state, especially in the redwood forests in the north, where the smell of weed wafts unmistakably down the streets of several towns. Marijuana remains popular with the baby boomer generation, which first experimented with it in the 1950s and 1960s. And its use is booming among teenagers and young adults, especially as alcohol cannot be sold to under 21s. US Marijuana cultivation is worth more than $35 billion per year. And that is a conservative estimate, based on government price surveys, Mr Gettman says. Corn, the largest legitimate crop, is worth just over $23bn and soybeans around $17bn. "Despite years of effort by law enforcement, they're not getting rid of it," Mr Gettman told the Los Angeles Times ahead of his report's publication yesterday in The Bulletin of Cannabis Reform. "Not only is the problem worse in terms of magnitude of cultivation, but production has spread all around the country. To say the genie is out of the bottle is a profound understatement."

USA: According to a report by the Marijuana Policy Project (MPP)  the cannabis laws for adults have no effect on drug use by  adolescents. It cites independent studies by RAND Europe and the U.S. National Research Council, which have reported that cannabis prohibition appears to have little or no impact on rates of use. Another report by MPP says that the value of cannabis production in the USA with an estimated production of 13.8 billion US dollars (about 10.5 billion Euros) exceeds the value of the production of any other agricultural product.

Mexico: Soldiers trying to seize control of one Mexico's top drug-producing regions found the countryside teeming with a new hybrid marijuana plant that can be cultivated year-round and cannot be killed with pesticides. Soldiers fanned out across some of the new fields Tuesday, pulling up plants by the root and burning them, as helicopter gunships clattered overhead to give them cover from a raging drug war in the western state of Michoacan. The plants' roots survive if they are doused with herbicide, said army Gen. Manuel Garcia. "These plants have been genetically improved," he told a handful of journalists allowed to accompany soldiers on a daylong raid of some 70 marijuana fields. "Before we could cut the plant and destroy it, but this plant will come back to life unless it's taken out by the roots." The new plants, known as "Colombians," mature in about two months and can be planted at any time of year, meaning authorities will no longer be able to time raids to coincide with twice-yearly harvests. The hybrid first appeared in Mexico two years ago but has become th plant of choice for drug traffickers Michoacan, a remote mountainous region that lends to itself to drug production. Yields are so high that traffickers can now produce as much marijuana on a plot the size of a football field as they used to harvest in 10  to 12 acres. That makes for smaller, harder-to-detect fields, though some discovered Tuesday had sophisticated irrigation systems with sprinklers, pumps and thousands of yards of tubing. "For each 100 (marijuana plots) that you spot from the air, there are 300 to 500 more that you discover once you get on the ground," Garcia said. The raids were part of President Felipe Calderon's new offensive to restore order in his home state of Michoacan and fight drug violence that has claimed more than 2,000 lives in Mexico this year.

Science: Parkinson's disease - According to a review by scientists of the University of Frankfurt, Germany, cannabinoids possess a therapeutic potential in Parkinson's disease. They may alleviate some symptoms (levodopa-induced dyskinesia) and due to their neuroprotective properties might slow the progression of the disease.