Switzerland: Could smoking pot be good for teens?

Switzerland: Could smoking pot be good for teens?


A new study from Switzerland raises the question: Might marijuana actually be good for teens? The answer is almost certainly no, but if one follows the logic used by the White House Office of National Drug Control Policy (ONDCP, aka the Drug Czar's office), the answer would be, "In some ways, yes." If that seems confusing, allow me to explain. The Swiss study, just published in Archives of Pediatric and Adolescent Medicine was based on a survey of 5,263 students, aged 16-20. Scientists compared teens who smoked both cigarettes and marijuana, those who used only marijuana, and those who abstained from both substances. The results were surprising. By pretty much all measures, the youths using both marijuana and tobacco were doing the worst. Compared to those using marijuana only, they had poorer grades, were less likely to finish school, more likely to be depressed and more likely to get drunk frequently. Their marijuana use was also much more frequent than the marijuana-only group, and they were much more likely to have started smoking marijuana before age 15. But the marijuana-only teens were strikingly similar to the abstainers, with very few statistically significant differences. The marijuana smokers were more likely to skip school but had comparable grades and were just as likely to finish their schooling as the abstainers. The marijuana users had more "sensation-seeking" personalities, which -- not surprisingly -- translated to somewhat higher use of alcohol or other drugs than the abstainers. But the
marijuana-only group's use of alcohol and other drugs was far lower than the marijuana/cigarette group. And in some ways the teens using marijuana looked better than the abstainers. They had better peer relationships, were more likely to be involved in sports and more likely to be on an academic (as opposed to vocational) track in school. 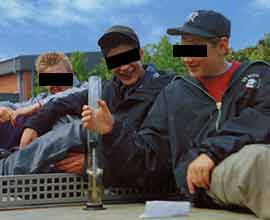 Canada: Marijuana use is increasing. Pretend it's the 1960s and bring on the pot! According to the 2004 Canadian Addiction Survey (CAS), there is a steady increase in marijuana use over the past decade. In 1994, 28 per cent of Canadian young adults 18 years and older reported using marijuana at least once in their life; today that number has increased to 45 per cent.  14 percent reported using marijuana this past year, indicating a seven per cent increase since 1994. "Despite the obvious problem of increased usage, there is the issue of using tobacco in joints or pipe smoking to assist in burning or to titrate the effect of marijuana, says Dr.  Scott Leatherdale, researcher at Cancer Care Ontario, University of Waterloo and University of Toronto.  "There is an urgent need to examine the relationship between tobacco and marijuana use among this at-risk population more closely." In 2004, approximately 1.9 million Canadians between the ages of 15 and 24 reported trying marijuana and 1.1 million reported using in the last year.  While 590,000 reported using pot three or less times per month, 430,000 of all young adults reported using the green guy weekly or daily. Of the young adults surveyed, 960,000 were current smokers.  34 per cent of them reported using marijuana at least once a week while 13 per cent smoked marijuana everyday.

Canada: Medical marijuana figures. Right now 177 designated grow operations are licensed by Health Canada to produce marijuana for medical purposes. As of June 1, 2007, there were 1,816 patients in Canada authorized to possess dried bud to relieve the symptoms associated with diseases such as multiple sclerosis, spinal cord injury, cancer, arthritis, HIV/AIDS and epilepsy. Patients can grow it themselves or buy it from the federal government's facility in Flin Flon, Man., or from a designated grower
like Island Harvest. Designated growers were initially allowed to supply as many customers as they could handle, but two years ago Health Canada changed the regulations so that each grower could only supply the needs of one
patient.

UK: Nine-year-olds among thousands seeking help with their addiction problems. Family breakdown and school exclusion are just two factors that are turning Britain's youngsters into drug abusers, especially of cannabis.  Last year, more than 9,000 went into treatment - an increase of 20 per cent. Thousands of British children are receiving treatment for drug abuse as stresses including family breakdown and expulsion from school fuel a rise in young people appealing for help with their addictions. Official figures obtained by The Independent on Sunday have revealed that more than 9,000 children aged as young as nine entered treatment for drug problems in England last year.  The total, revealed by health ministers, was up a fifth on the figure for 2005-06. More than half the young people in residential treatment units or reporting to GPs and community action teams list cannabis as the main drug they are abusing.  But, in a disturbing signal that abuse of class A drugs is creeping into Britain's playgrounds, the proportion of young people in treatment listing cannabis as their principal drug is falling.