Spain: Mallorca Doctors on Mallorca should be able to prescribe cannabis to their patients

Spain: Mallorca - Doctors on Mallorca should be able to prescribe to their patients cannabis for therapeutic purposes. On 7 April the parliament of the Baleares voted in favour of this issue with a large majority. It is intended first to evaluate results of pilot projects in other regions of Spain. 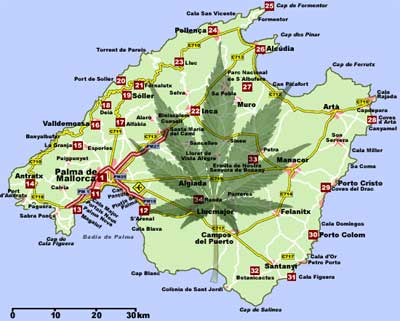 Spain: Mallorca Doctors on Mallorca should be able to prescribe cannabis to their patients

The decision of the regional parliament of the Baleares is possible because the responsibility for the health system has been passed on to the regional government by the central government.

An EMC Research poll commissioned by Oaksterdam University and conducted between March 16 and 21 has found that California voters are ready to offer majority support for taxing and regulating marijuana possession and sales and production. That's a first. Some 54% of those polled believed marijuana should be legal for adults, while 39% disagreed.

When asked if they would support an initiative to allow for the consumption of cannabis by adults with taxed and regulated sales by local option, 53% said yes, while 41% said no. When the hypothetical initiative was divided into its two parts, taxed and regulated sales by local option garnered 55% approval, while allowing adult consumption got 50%. When asked to consider the hypothetical that such an initiative had passed and their county or city was voting whether to tax and regulate marijuana sales and production, 59% said yes, while only 36% said no.

Some 58% of respondents said that marijuana should be treated the same as (50%) or less seriously (8%) than alcohol. The poll also queried voters about which arguments for marijuana legalization and regulation resonated most strongly. The following arguments were most persuasive: It would ease access to medical marijuana for people who need it (57% said more likely to approve), it would keep pot from kids (54%), it would allow police to focus on violent crime (51%), and it would take business from street dealers (50%).

Somewhat surprisingly, economic arguments were not as persuasive. Arguing that legalization would provide funding for social services would make only 45% more likely to approve, that it would provide billions in tax revenues, 40%; that it would create thousands of jobs, 37%. Finally, after going through the questions, the poll asked again whether they would support cannabis legalization for adults with taxed and regulated sales and production by local option.

This time 62% approved and 39% disapproved. That's a 9% improvement over the answers given at the beginning of the poll and suggests that a little concentrated thought about the matter raises approval rates. The poll comes less than a month after Rep. Tom Ammiano (D-San Francisco) introduced a AB 390, which would legalize marijuana in the state, but only once the feds clear the way. It looks like California lawmakers need to start catching up with the people who elect them.

Canada/British B.C.: 64 percent of British Columbians back legalization of marijuana.
Amid a raging gang war in Metro Vancouver that is widely believed to be over control of the illegal drug market, a new Angus Reid Strategies poll shows that half of Canadians endorse the legalization of marijuana. The survey results, released on March 5, also show that 64 percent of respondents in British Columbia want cannabis to be legalized. However, the same poll found that less than eight percent of Canadians favour the legalization of hard drugs such as cocaine or  crystal meth.

B.C. solicitor general John van Dongen was among the guests at the March 1 private screening of A Warrior's Religion, a documentary dealing with gangs in the South Asian community. "That is a federal issue and certainly the Conservative government has made their position clear that they're not going there," van Dongen told the Straight in an interview in the lobby of the Rio Theatre in East Vancouver, when asked if legalization is being contemplated.

"They're looking at strengthening the legislation the Criminal Code,"  van Dongen added. The Angus Reid Strategies survey shows that there is high support among Canadians for toughened criminal legislation against gang activity. "They've made some announcements in the last few days and the British Columbia government looks forward to working with the federal
government and all the opposition parties to strengthen the  compliance with the law with respect to gun and gang violence," van  Dongen said.

Europe: Britain Could Save $20 Billion a Year by Legalizing Drugs, Study Finds.

A regime where currently illicit drugs are regulated and legalized would provide numerous benefits to Britain, not the least of which would be up to $20 billion a year in savings to government, crime victims, and drug users, according to a comprehensive comparison of the costs of drug prohibition and drug legalization.

The figure comes from A Comparison of the Cost-effectiveness of Prohibition and Regulation, a report released Wednesday by the British drug reform group the Transform Drug Policy Foundation. The group says it is the first time anyone in Britain has attempted an across-the-board comparison of the differing approaches to drug use and sales.

According to official British policy, policies or programs should be assessed by a cost-benefit analysis or impact assessment, but that has never been done with drug prohibition. Instead of evidence-based policies, the British government has relied on mere assertion to justify maintaining prohibition and to argue that the harms of legalization would outweigh its benefits.

Now, Transform is calling the government's bluff. According to its analysis, which examined criminal justice, drug treatment, crime, and other social costs, a regime of regulated legalization would accrue large savings over the current prohibitionist policy. Transform postulated four different legalization scenarios based on drug use levels declining by half, staying the same, increasing by half, and doubling. Even under the worst case scenario, with drug use doubling under legalization, Britain would still see annual savings of $6.7 billion.

Under the best case scenario, the savings would approach $20 billion annually. "The conclusion is that regulating the drugs market is a dramatically more cost-effective policy than prohibition and that moving from prohibition to regulated drugs markets in England and Wales would provide a net saving to taxpayers, victims of crime, communities, the criminal justice system and drug users," Transform found.

In a true grassroots effort, a group of Floridians organized as People United for Medical Marijuana (PUFMM) has begun an effort to put a medical marijuana initiative on the November 2010 ballot. The group needs some 687,000 valid signatures of registered voters in the next nine months to qualify.

The group is not affiliated with any national organization and says it needs $5 million for the signature gathering drive and the election campaign. Unlike more traditional initiative campaigns, PUFMM is relying heavily on Internet-based activism. The group's Facebook page already has 4,800 members, and PUFMM is counting on cascading new memberships to gather what it hopes is 1.2 million signatures, providing a very comfortable cushion at validation time.

PUFMM is also hoping for each signatory to kick in $5. That way, the group could meet its self-imposed budget goal. "Patients need a safe, affordable and effective medication. We hope Florida will lead the nation in marijuana research to further its uses as a medicine," PUFMM head Kim Russell, whose father suffers from Parkinison's Disease, told the Cape Coral Daily Breeze. "There is absolute support, we just have to get everyone organized," she said, citing favorable national polling data.

The proposed amendment does not create limits on the number of plants or the amount of usable marijuana patients may possess. It appears to leave that up to the legislature. In fact, PUFMM would prefer that the legislature just went ahead and passed a medical marijuana bill and is asking people to write to their representatives in the hope of achieving just that. "We are hoping they will submit a bill rather than a ballot initiative," Russell said. "The Internet is a huge resource for us." While the effort is just a week old, it has already been denounced by the Florida Sheriff's Association and by Bill Janes, director of Florida's Office of Drug Control. "When we increase the availability of marijuana we increase the availability for young people," Janes said. "What this petition doesn't address is how the marijuana will be controlled. Will we just allow random growing of marijuana?"

Spanish researchers were able to demonstrate that the cannabis compound THC (dronabinol) induces death of human brain cancer cells through stimulation of autophagy. They also showed that autophagy happens before apoptosis, a form of programmed cell death, in dronabinol-induced cancer cell death and that this cell reaction was necessary for the anti-tumour action of cannabinoids in animals.

"Our findings support that safe, therapeutically efficacious doses of THC may be reached in cancer patients," Guillermo Velasco of Complutense University in Madrid and colleagues reported in their article for a scientific journal. The term "autophagy" from Greek means literally "self-eating". Autophagy can promote cell death, but the exact mechanisms underlying its role in cancer remains unclear.

It involves the degradation of a cell's own components and plays a normal role in cell growth and development, helping to maintain a balance between synthesis and degradation of cellular products. The most well-known mechanism of autophagy involves the formation of a membrane around a region of the cell, separating the contents from the rest of the cell content, which is then degraded. Autophagy may play a role in the battle against cancer and in the defence of infections.