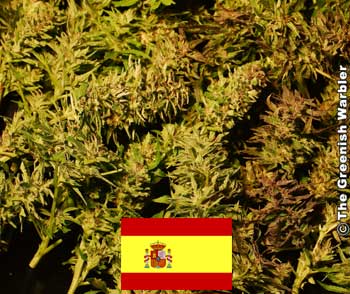 "Prohibitionism, installed in the United States at the beginning of the 20th Century, and  imposed by that country on the rest of the planet, has failed,"  Manjon-Cabeza wrote. "There are multiple law enforcement and public health reasons that recommend legalization."

Proposition 19 pot legalization initiative leads 47%-38% in the latest Public Policy Polling survey of likely voters. That's good, but not great, news for the campaign. Good because nine points is a nice cushion six weeks out from election day. But not great because Prop 19 is still polling under 50% when it needs 50% plus one vote to win and because the race is closer than in the previous Public Policy Polling survey in July, when it led 52%-36%.

The poll is an automated phone survey of 630 likely voters, with a margin of error of +/- 3.9%. It took place last week. Most, but not all recent polls, have shown Prop 19 leading. The Talking Points Memo Poll Average on Prop 19, which combines all the recent polls, has the measure leading 47.8% to 38.8%.

Activists in Alabama have been trying for years to get a medical marijuana bill passed there. Last year, for the first time, a bill made it out of committee. Next year, they will try again, but even if they succeed, it will be too late for Michael Lapihuska. Lapihuska, cursed with depression and Post-Traumatic Stress Disorder (PTSD), grew up in Alabama, but left the state after serving 13 months for possessing five grams of marijuana in 2003.

The now card-carrying medical marijuana patient from California was arrested on marijuana possession charges again on December 15 in Anniston, Alabama, as he visited his family for the holidays. Lapihuska was stopped by a police officer and accused of hitch hiking as he walked down a road. The officer demanded he be allowed to search Lapihuska, and he complied. The search came up with a prescription bottle containing one gram of marijuana. Lapihuska explained that he was a registered California medical marijuana patient and produced a patient ID card.

On 29 to 31 October 2010 the first Austrian Conference on Cannabis Medicine will be held during the hemp exhibition Cultiva.

Science: Cannabidiol beneficial in social anxiety disorder in a small  clinical study
A small clinical study was conducted at the Division of Psychiatry of the University of São Paulo, Brazil, with 10 patients suffering from generalized social anxiety disorder. In the first session,  subjects were given an oral dose of cannabidiol (CBD) (400 mg)  or placebo, in a double-blind procedure.

In the second session, the  same procedure was performed using the drug that had not been  administered in the previous session. Regional cerebral blood flow  at rest was measured by an established method (Single Photon  Emission Computed Tomography, SPECT) during each session.

Relative to placebo, CBD was associated with significantly decreased subjective anxiety. CBD also caused changes in regional cerebral blood flow. Researchers concluded that "these results suggest that CBD reduces anxiety in SAD [social anxiety disorder] and that this is related to its effects on activity in limbic and paralimbic brain areas."