Sierra Leone: Farmers are increasingly growing cannabis instead of staple foods such as cassava and rice, a shift that is threatening food production capacity, Vice President Samuel Sumana said on Wednesday. The statement from a nation still recovering from 11 years of war is the latest stark warning of a trend towards West Africa increasingly becoming a producer of and transit point for drugs bound for Europe or consumed locally. 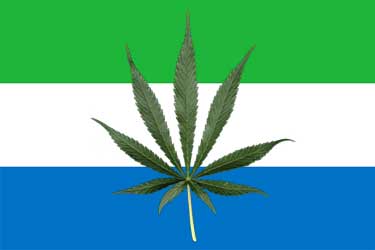 "In some parts of our country, more and more of our people are developing interest and diverting their energies into the cultivation and trade of cannabis in place of our local staple food," Sumana said on the sidelines of a meeting on tackling organised crime and drugs trafficking.

"The cultivation of cannabis has a negative effect on our food production capacity ... our government is dismayed at this appalling situation and we are committed to do all we can to mitigate this threat," he added. Boosted by high-profile seizures, anti-narcotics experts focused over the last few years on the flow of Latin American cocaine headed to Europe through a string of weak nations.

The United Nations Office on Drugs and Crime (UNODC) says known volumes of cocaine passing through the region eased in 2008 to around 20 tonnes, worth some $1 billion, down from previous estimates of around $4 billion.

Upon the invitation of Greek MEP Michail Tremopoulos and ENCOD (European Coalition for Just and Effective Drug Policies), approximately 40 representatives of European civil society organisations from 15 different countries will come together to formulate their recommendations to Members of the European Parliament, the European Commission and the European Council on the future approach that the European Union should take regarding criminalised drugs.

The hearing is held two weeks before the annual meeting of the United Nations Committee on Narcotic Drugs in Vienna. According to the organisers of the hearing, the EU representatives should use the opportunity of the CND meeting to start a serious debate on alternative ways to regulate the drugs market that are not based on prohibition. The main issue on the agenda of the public hearing will be the "Report on Global Illicit Drugs Markets 1998 - 2007" that was financed by the European Commission in 2008.

The study was carried out by a team of respected drug researchers chaired by Prof. Peter Reuter of Rand Corporation, USA and Mr. Franz Trautmann of the Trimbos Institute, Netherlands. It came about after many years in which ENCOD and other civil society organisations had called for an independent evaluation of the impact of worldwide drug prohibition.

The New Hampshire House Criminal Justice and Public Safety Committee voted February 11 to approve House Bill 1653, which would decriminalize the possession of up to a quarter-ounce of marijuana. The measure passed on a 16-2 vote. Under current New Hampshire law, possession of up to a quarter-ounce is a misdemeanor punishable by up to a year in jail and a $2,000 fine.

Under the bill, possession of that amount would be a non-criminal infraction punishable by a $200 fine. Rep. David Welch (R-Kingston) told the Eagle Tribune the bill would probably pass the House. Continuing to spend law enforcement resources on pot smokers "seems foolish," he said. "It's no worse than tobacco and possibly not as bad." The measure is supported by the New Hampshire Coalition for Common Sense Marijuana Policy. Coalition executive director Matt Simon told the Eagle Tribune he was pleasantly surprised by the victory. Similar legislation died two years ago, but now committee members are more comfortable, he said.

If the bill passes the House, it still must get through the Senate, and even then, it faces a probable veto from Gov. John Lynch (D) who opposes decriminalization. Lynch vetoed a medical marijuana bill last year. The House voted to override that veto, but the effort fell two votes short in the Senate. Thirteen states have decriminalized marijuana possession. The most recent was neighboring Massachusetts, which did so last November via the initiative process.

Last Thursday was a day of concentrated attack on the thriving Los Angeles-area medical marijuana scene, with the DEA hitting a Culver City dispensary and the LA City Attorney's Office serving eviction notices to 18 dispensaries within the city and filing nuisance abatement lawsuits against three more.

One dispensary, the Organica Collective in Culver City, was the object of attention from both the feds and the city, while two Holistic Caregiver dispensaries were the objects of a joint multi-agency investigation including the DEA. The enforcement actions were undertaken independently, said DEA spokesperson Sarah Pullen. "It's a separate thing, but we were aware of each other's operations today," she said, declining to comment further except to say that search warrants were being served.

Early reports had numerous police and DEA vehicles outside the collective and three people in handcuffs outside the building. Local TV station CBS 13 reported Thursday afternoon that Organica owner Jeffrey Joseph had been arrested, apparently on state marijuana distribution charges. According to a press release from the LA City Attorney's Office, Organica was also one of three dispensaries named in lawsuits filed by the city for violations of narcotics abatement and public nuisance ordinances. The other two were two Holistic Caregivers locations, which the city said were also the object of a joint investigation with the DEA.

All three dispensaries were also accused of violating the Sherman Food, Drug, and Cosmetics Law, which requires the proper labeling of medicines. The LA City Attorney's Office won the first case applying that law to medical marijuana last month.  The alleged behavior of the dispensaries may not have been prudent, but it's not clear it was unlawful. According to prosecutors, "Organica passed out flyers for the dispensary near Culver City High School as classes were being dismissed. Officers have found students to be in possession of marijuana apparently purchased from Organica. Persons stopped in the vicinity of Organica also admitted supplying the shop with marijuana laced edibles and picking up large quantities of marijuana from Organica for delivery to other dispensaries."

The Iowa Board of Pharmacy voted unanimously Wednesday to recommend that state lawmakers reclassify marijuana as a Schedule II controlled substance and set up a task force to study how to create a medical marijuana program. Medical marijuana bills have previously failed to move in the state legislature, but the board's action could help spur forward momentum.

Similarly to the federal Controlled Substances Act, Iowa law currently classifies marijuana as a Schedule I drug with no proven medical use and a high potential for abuse. By recommending that marijuana be rescheduled to Schedule II -- a potential for abuse, but with accepted medical use -- the board acknowledged the herb's medical efficacy. Given the board's initial reluctance to take up the issue, the unanimous vote comes as something as a pleasant surprise to advocates.

In May 2008, Iowans for Medical Marijuana founder Carl Olsen petitioned the board to reschedule marijuana, arguing that the evidence did not support its classification as Schedule I. The board rejected that request, and Olsen, three plaintiffs, and the ACLU of Iowa sued to force it to reconsider. (See the filings in the case here). Last year, a Polk County judge ordered the board to take another look at the matter. The board again declined to reclassify marijuana, but did agree to a series of four public hearings. It was after those hearings, which were packed with medical marijuana supporters, and after a scientific review of the literature, that the board acted this week. In doing so, it becomes the first state pharmacy board in the nation to take such a step before voters or lawmakers have legalized medical marijuana.

The board's action also puts it squarely in line with popular sentiment in the Hawkeye State. According to an Iowa Poll released Tuesday, 64% of Iowans want medical marijuana to be legal. Now, if only the legislature will act on the recommendation of the board and the will of the voters.