Cannabis smokers are unwittingly funding Islamist extremists linked to terror attacks in Spain, Morocco and Algeria, according to a joint investigation by the Spanish and French secret services. The finding will be seized on both by campaigners for a harsher clampdown on cannabis and by those who argue that legalisation is the only way to end a petty dealing trend that is dragging growing numbers of
teenagers into crime. The investigation by the Centro Nacional de Inteligencia and the Renseignements Generaux was launched after Spanish police found that the Islamists behind the March 2004 bombings in Madrid bought their explosives from former miners in return for blocks of hashish. The bombings claimed 191 lives. Spain's role as a transit point for drugs was highlighted last week when Madrid hosted the US Drug Enforcement Agency's annual conference. Experts heard not only that North African hashish was funding terrorism in Europe, but also that West Africa had become a new hub for South American cocaine shipments bound for Europe. Morocco is the world's leading cannabis exporter, with an annual crop estimated to be worth at least two billion dollars. Last month, the Moroccan navy seized three tonnes of Europe-bound hashish off the Mediterranean port
of Nador. The same week, Spanish coastguards seized 4.3 tonnes of
Moroccan resin off Ibiza. The joint secret service investigation finds that hashish is part of a 'complex financing network' serving the Algeria-based Salafist Group
for Preaching and Combat, affiliated since last year to al-Qaeda. The group claimed responsibility for two bombings in Algiers on 11 April that killed 30 people and left 200 injured. French terrorism expert Dominique Thomas said the link between drug dealing and Islamic terrorism was not new: 'The issue stands at the core of divisions within al-Qaeda between those who believe that the end justifies the means and others who argue that drugs are incompatible with Islam.' 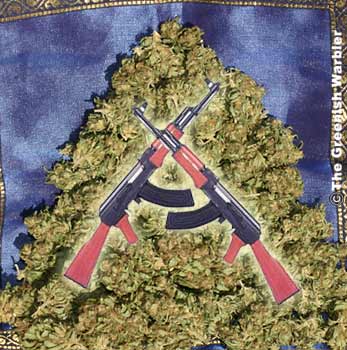 USA: Rhode Island Senate and House of Representatives vote to make the state medical cannabis law permanent The Rhode Island Senate passed a bill on 3 May that would  make the state's medical cannabis law permanent. The bill  passed with a margin of 28-5, wide enough to sustain a possible  veto from Governor Donald Carcieri, who vetoed the original  bill in 2005. Lawmakers of the House of Representatives passed an identical measure on 2 May by a similarly large margin (50-12). Rhode Island became the eleventh state in the USA last year to  begin a medical cannabis program. It expires on 30 June 2007 unless lawmakers renew it. Under the program, patients suffering  from HIV or AIDS, cancer, glaucoma, severe nausea, seizures  or other debilitating illnesses can get state permission to possess  up to 12 cannabis plants and 2.5 ounces (1 ounce = about 28.5  grams) of cannabis in a usable form. Caregivers of patients may possess up to 5 ounces of cannabis. More than 250 patients and about the same number of caregivers are registered in the program. Governor Carcieri hasn't decided whether he would veto the bill or let it become law without his signature, said his spokesman, Jeff Neal. If he vetoes the bill lawmakers of the Senate and the House of Representatives can overrule the veto by a three-fifths vote.

Science: British scientists analysed symptoms of 757 subjects, who developed schizophrenia, of whom 182 (24 per cent) had used cannabis in the year prior to first presentation to a psychiatrist due to the disease. There were no significant differences in the symptoms between cannabis users and non-users that have been
observed in some small studies. In addition, cannabis users who developed schizophrenia had no greater family history of schizophrenia. The authors concluded that this "argues against a distinct schizophrenia-like psychosis caused by cannabis."

USA: In a public letter, Virginia Resner, President of Green Aid, said that they need to raise $100,000 for the Ed Rosenthal case. She wrote: “We are asking for your help because Ed's case will change marijuana policy for all of us. This is a totally political case: what's on trial is the future of medical marijuana. The court has already agreed that Ed cannot receive any more time, since he has already served his sentence.  Federal prosecutors are hoping to use this trial to close all the dispensaries in California.  If Ed wins acquittal, it can change their misguided policies. We need your help right now to send a message to Washington.  Ed is being defended by a dynamic team of attorneys mentored by Tony Serra, who share his disdain for these cruel and unjust policies. Even though they are working at a reduced rate, funds are still needed for courtroom transcripts, expert witnesses, investigators and all the other resources necessary to explain the whole truth to the jury. The publicity campaign is also expensive but necessary to educate the media and the public about what's really at stake. Ed's case has already backfired on the government. During the first trial, public interest in medicinal marijuana skyrocketed.  The media was extremely favorable and supportive. It was a huge victory for patients, providers, and the drug policy reform movement. Keith Stroup, founder of NORML said, "The world changes when people like Ed Rosenthal stand up and fight back." […] This trial will convince more people that the government is spending billions of dollars to maintain a policy that is out-of-touch, cruel and has no rational basis. At the same time we are protecting the
democratic process in the 12 states that have made the compassionate decision to allow medical marijuana. We've all wanted to change the laws for a long time.  By making a generous contribution to Green Aid today, your funds will go directly to this upcoming trial. Raise some funds for Ed, and he'll make sure the public takes notice.
Make a donation now at http://www.green-aid.com or you can send a
check to Postal Mail Box #172, 484 Lake Park Ave., Oakland, CA 94610
Thank you for your continuing support. We can't win without you!”