Scotland: In a report released Wednesday, the Scottish government is recommending that small-time marijuana offenders simply be handed on-the-spot fines of $67.

The fines, or "fixed penalty notices," are already in effect for a number of public nuisance offenses, such as public drunkenness, vandalism, and urinating in public. Adding small-time marijuana offenses to the list won the support of 83% of police officers surveyed for the report. If adopted, the ticketing scheme would move Scottish practices closer to those in England or in limited parts of Scotland, where police officers have the option of issuing a warning to people caught smoking or in possession of small amounts of marijuana. 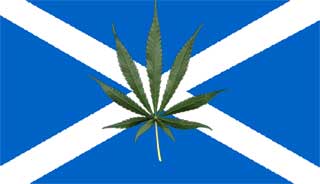 "This was felt to be a proportionate means of dealing with a minor offence which would also save a lot of police time," the report said. Under current United Kingdom drug law, marijuana is a Class B drug, with simple possession punishable by up to two years in prison. In practice, such harsh sentences are rarely imposed.

Middle East: In Israel, Medical Marijuana Advances in the Knesset and at Sheba Hospital

Sheba Medical Center in Tel Hashomer has become the first hospital in Israel to administer medical marijuana to patients, the Israeli newspaper Haaretz reported Tuesday. Some 20 patients have been treated with medical marijuana in a pilot program over the last six months, the newspaper reported.

Meanwhile, the Jerusalem Post reported Wednesday that the Knesset's Labor, Social Affairs, and Health Committee had instructed the Health Ministry to finish its proposals for regulating medical marijuana use within four months. Such regulations should address the production, quality, and marketing of medical marijuana, as well as prevent diversion into non-medical markets, the committee instructed the ministry.

In Israel, people with cancer, multiple sclerosis or certain other conditions can apply for a license to receive a free supply of medical marijuana. It is provided by a charitable organization, Tikkun Olam, which supplies it to some 700 patients.

These were from outdoor grows whose sophistication impressed law enforcement.

30,000 plants were recovered from just one grow spread out over miles. Once again law enforcement is blaming Mexican cartels for these grows.

Customs officials say they got a surprise when they found 316,000 glass bongs disguised as Christmas ornaments at the Los Angeles harbor. U.S. Customs and Border Protection said Thursday that agents found the highly decorated drug pipes in 860 boxes shipped from China.

The cargo, estimated to be worth more than $2.6 million, had been described as glass figures and Christmas ornaments. The bongs were seized Tuesday at the Los Angeles/Long Beach port complex. Customs spokeswoman Cristina Gamez says the importer remains under investigation and there have been no arrests. She says it is illegal to import or export drug paraphernalia in the United States.