There have been so many news in recent years about the medicinal properties of cannabis, but this one is really special and amazing: It was demonstrated by researchers that the growth of human hair follicles was inhibited by endocannabinoids and THC. This effect was mediated by the CB1 receptor. Researchers concluded that CB1 receptor agonists "may therefore help to manage unwanted hair growth, while CB1 antagonists might counteract hair loss."

Germany: The Federal Institute for Pharmaceuticals and Medical Products finally concedes an exemption for the medical use of cannabis to some patients. In letters of June 2007 to some patients the Federal Institute for Pharmaceuticals and Medical Products (BfArM), an institution of the Federal Health Ministry, in principle concedes their right to use cannabis for medicinal purposes. The presented medical documents would show, that a treatment with the available medicinal drugs "turned out not to be successful so that the use of cannabis can be recommended from a clinical point of view" and that "an approved drug that would at least be as effective as cannabis for the treatment of your illness is currently not available," respectively. The BfArM suggested to the patients to use a cannabis extract to be manufactured by a pharmacy designated by the patient. So far, it is unknown how expensive the extract will be and if the health insurances will reimburse the costs of the treatment. The
applicants were asked by the BfArM to drop their application for an import of medicinal cannabis from the Netherlands and to accept the alternative proposed by the BfArM. "For reasons of precaution" the institute pointed out that in case of retention of their application they have to anticipate a dismissal. Although the
cannabis produced by the Dutch company Bedrocan is standardised on THC and CBD the BfArM justifies it's attitude with the "unknown and varying" concentrations of active agents, respectively. 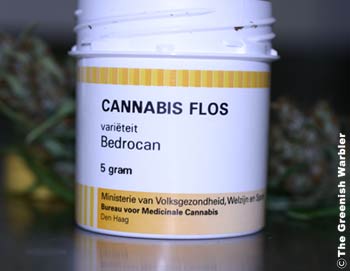 "The German Federal Institute for Pharmaceuticals and Medical Products does not allow patients to import and use medical cannabis from Dutch company Bedrocan."

Germany: One of the two companies that produce dronabinol for medical
purposes was renamed on 15 June 2007. Delta 9 Pharma, a subsidiary company of the phytopharmaceutical company Bionorica, is now named Bionorica Ethics.

USA: Connecticut – Cannabis legalization for medical treatment vetoed by Governor. After struggling with what was described as one of the most difficult decisions in her three-year tenure, Governor M. Jodi Rell on 20 June vetoed a measure that would have legalized the use of cannabis for certain medical conditions. In a statement, Mrs. Rell said, "I completely sympathize with the well-intentioned goal of alleviating pain and suffering, but legal alternatives are available."

USA: Two pot crusaders facing jail. Longtime pot crusader Grant Krieger was jailed for four months on a drug trafficking charge, and he wasn't allowed to take his
medicinal marijuana behind bars. Despite a constitutional exemption that allows Krieger to use cannabis to alleviate his multiple sclerosis pain, the judge ruled against the legal right applying in jail, said his lawyer, John Hooker. Krieger was surprised the morning's court appearance ended with his incarceration at the Calgary Remand Centre, his son Ryan Krieger said. After a decade of legal wrangling and more than two years in prison med-pot pioneer Bryan Epis faces a return to prison. At the Sacramento courtroom, Bryan Epis is scheduled to testify once again in his
marijuana-cultivation case. Epis' case began with his arrest 10 years ago almost to the day and still isn't resolved. What started out as a small-time bust has become a legal roller-coaster ride, made Epis a hero among med-pot activists, and raised serious constitutional issues.

Canada: Dosage debate has pot users smoking` mad. Health Canada, the governmental health organisation, has been contacting doctors who prescribe medical marijuana for their government-approved patients, advising
them to keep the dosages low. Some users say that not only violates doctor-patient confidentiality, it's also wrong for bureaucrats to make judgments about the medical
needs of people they've never seen. "A person's medication should be between him and his doctor," said Tony Adams, 60, a medical marijuana user in Victoria. Adams, a licensed user who's been smoking seven grams of marijuana daily, recently applied to Health Canada to increase the dose to 10 grams, with his doctor's authorization.
Official approval from Ottawa is needed so Adam can legally grow the appropriate number of marijuana plants, set by Health Canada at five plants for each daily gram. But a program official in Ottawa challenged Adams' doctor in a telephone call, saying most patients need no more than five grams. Adams, who has severe arthritis and degenerative disc disease, later received a new licence for just five grams a day.
The department's campaign to keep doses to five grams or less includes postings on its website referring to external surveys and studies indicating most medical users need one to three grams daily, "whether it is taken orally, or inhaled or a combination of both."