Famously tolerant San Francisco could become an even friendlier place for pot smokers if the Board of Supervisors passes legislation that proclaims most marijuana violations "the lowest law enforcement priority" for city police. Supervisor Tom Ammiano introduced the legislation last month before supervisors took a four-week late-summer break. His nonbinding ordinance directs police to essentially ignore all marijuana crimes except those involving minors, driving under the influence of the drug or the sale of marijuana in a public place. Ammiano said Monday that his legislation is consistent with Proposition W - a measure passed by 64 percent of city voters back in 1978 that called for an end to marijuana arrests and prosecutions - and with city policy permitting the use of cannabis for medical purposes. If passed, the ordinance would commit the city to refusing federal funds intended for the investigation or prosecution of marijuana offenses. It also would prevent a federal agency from commissioning or deputizing a city police officer for assistance in such cases. 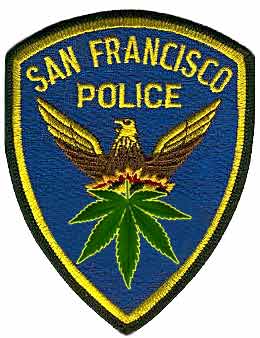 Britain has a greater level of serious drug abuse than any other country in Europe, damning new figures show. The study reveals nearly one in every hundred people of working age in this country is a drug addict, a level unmatched anywhere else on the continent. The United Nations report showed that rates of problem abuse here are more than three times those in Holland, nearly four times levels of serious drug-taking in Germany, over twice the rates in France, and nearly double the European average. The number of regular heavy and regular drug abusers in Britain has shot up compared to the rest of Europe over the past decade.

In Canada, a woman owning a commcercial drive establishment got 15 months in jail for selling pot. She had openly sold cannabis to customers in her Da Kine Cafe.
At the height of the coffee shop's success in the summer of 2004, police say it attracted thousands of customers to its doors, gaining international attention. Justice Catherine Wedge of the B.C. Supreme Court took only minutes to render her decision in sentencing Carol Gwilt. Gwilt, 39, who has no previous criminal record, told reporters during a break in the proceedings she was prepared to receive a lengthy prison sentence, but admitted she found the reality of the situation
difficult to accept. "I think it's really hardcore. I'm going to have a hard time," she
said.

After completion of the CAMS study (Cannabinoids in Multiple Sclerosis) in 2003, a second phase III trial on the standardized oral cannabis extract Cannador started in July in 20 centres in the UK. This study is sponsored by the pharmaceutical company Weleda, Switzerland, and the Society for Clinical Research in Berlin. It is intended to include 400 patients with multiple sclerosis, who suffer from spasticity and pain insufficiently treated by available medication, into this study within the coming 15 months. As in the CAMS study the study will be headed by Dr. John Zajicek, a professor at the Peninsula Medical School, Plymouth.

Italy: Health minister authorizes the import of medicines that contain THC. The Italian Health Minister Livia Turco has officially ordered that the import of medicines containing THC can still be authorized by the Central Narcotics Commission of the Ministry, for patients who need these medicines and have no alternatives available. The Minister's ordinance is valid until 30 November 2006. The previous government's drug law, currently in effect, states that cannabis has no accepted medical uses, and all cannabinoids were excluded from Table II, the official list of all the narcotic and psychotropic substances accepted for medical use. Following an appeal signed by over 100 health care professionals and researchers, in the interest of patients who depended on the regular import of cannabis medicines like nabilone, dronabinol, Sativex and Bedrocan from abroad, the new government's Health Minister responded with this ordinance, while waiting for a decision by the Superior Health Council whether to include cannabinoids in Table II again.