Belgium: Police has spotted the country`s up to now largest cannabis plantation. In a 10,000 m2 greenhouse in the village Merksplas near the Dutch border, the agents found 30,000 to 40,000 cannabis plants. 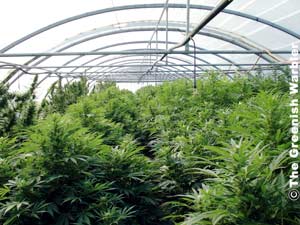 Austria: Drug enforcement officials have uncovered what they say is so far the largest indoor hemp growing plantation in Austria. The illegal and fully automated plantation located in the Eferding district of Upper Austria is said to cover an area of around 4,000 square metres. Police say they have seized about 23 kilos of cannabis weed. The drug dealers are reported to have invested some 100,000 euro in the facility.

Canada: 25,000 pot plants seized. A six-week policing project aimed at identifying and taking down indoor and outdoor marijuana growing operations in the Kootenays has resulted in the seizure of more than 25,000 plants worth an estimated $25 million, RCMP say. The project, spearheaded by police in Slocan Lake, Kaslo, Nelson, Nakusp and Castlegar, began in mid-July and wrapped at the end of August.  A total of 16 RCMP officers, three auxiliary RCMP members and one RCMP pilot were involved in the investigations, which led to 19 drug search warrants being executed on Crown and privately owned lands. Marijuana found on Crown land was destroyed on site, police said. Thirteen people face drug-related charges in connection with the project.  No names have been released pending approval of charges. The investigation continues.

Canada: Inspection program to crack down on pot growers working, fire chief says. Surrey - When the city launched a program to have the fire department inspect homes using suspicious amounts of power, some wondered if it was worth the effort. Wonder no more. "It's working," Chief Len Garis says. Surrey's crackdown on marijuana growing operations through its Electrical and Fire Safety Inspection program has shut down a number of illicit operations and led to a drop in the number of house fires in the city, according to a report for Surrey city council from Garis. The report shows that between July 27, 2006 and June 25, 2007, 65 per cent of the places inspected were no longer attracting the attention of the program. Surrey's program, which is now being adopted by other cities, was launched in response to the high number of fires caused by marijuana growers in the city. In partnership with BC Hydro, the EFSI initiative allows electrical inspections of houses that are consuming higher than normal levels of electricity. In 2006, the first full year of the EFSI program, the number of fires sparked by growing operations dropped to 3.7 per cent, or nine fires, which was a 40 per cent decrease from the previous year. In January of 2007, the Surrey EFSI team was expanded and inspected 1,000 addresses obtained from Hydro that meet the criteria of unusually high consumption. Inspections conducted during the first half of 2007 identified electrical deficiencies in 86 per cent of the homes inspected, or nearly nine of out every 10 places inspected.

USA/California: For the second time in five years, Bryan James Epis, the first person associated with a California cannabis buyers' club to be tried in a federal court for growing marijuana, was sentenced Friday in Sacramento to 10 years in prison.  But U.S.  District Judge Frank C.  Damrell Jr.  denied prosecutor Samuel Wong's request that Epis, 41, be taken into custody immediately.  Instead, he set an Oct.  22 hearing on defense attorney Brenda Grantland's forthcoming motion for bail, pending appeal. In July 2002, a jury found Epis planned to eventually grow at least 1,000 marijuana plants and that he did grow at least 100 plants in the spring of 1997 at his Chico residence.  The fact that the house is within 1,000 feet of Chico Senior High School is one reason Epis is not eligible for a term less than 10-year mandatory minimum attached to the 1,000-plant conviction.

The Netherlands: “Wait period” for drug tourists. A new proposal from the mayor of Amsterdam is sure to be considered a bummer by certain visitors to the Dutch city: a three-day waiting period to buy hallucinogenic mushrooms.  Mayor Job Cohen wants to require the wait period to allow mushroom buyers to fully understand exactly what it is they are purchasing, ANP news agency reported Tuesday. The proposal seeks to prevent impulse purchases and follows several incidents that have occurred in the city involving tourists who have eaten hallucinogenic mushrooms.

USA: Rhode Island - In August 302 patients and 316 caregivers were enrolled in the
medical cannabis program, according to the state Department of Health. A total of 149 physicians in Rhode Island have referred patients to the program. The Health Department has rejected 10 applicants as caregivers because of felony drug convictions, and a caregiver and patient have had their medical-cannabis identity
cards revoked after being arrested for having dozens more plants than allowed. Patients in the program may possess up to 12 cannabis plants and 2.5 ounces (about 70 grams) of cannabis. An adult without any felony drug convictions may
serve as a "caregiver" for up to 5 patient.

USA: A federal judge rejected an attempt of the federal government to
obtain patient records from Oregon's state medical cannabis program. In May federal authorities issued subpoenas seeking the information as part of an investigation on some growers in Oregon and Washington. The issue had concerned many
patients over the protection of their personal information. The state of Oregon and a medical cannabis clinic moved to quash the subpoenas. The judge said that the state would violate its own privacy laws if it complied.

Germany: Cannabis extract - The first patient, who was approved the medical use of cannabis by the Federal Institute for Pharmaceuticals and Medical Products in early August, received a standardized cannabis extract on 13 September. The extract was manufactured by the company THC Pharm from cannabis of the Dutch company
Bedrocan and was supplied for free. The pharmacy of Claudia H., who suffers from multiple sclerosis, prepared a sesame oil based liquid from it. The future price of the cannabis extract is unknown.

Switzerland: The court of Schaffhausen has imposed a fine to a manufacturer of cannabis extracts. Since many years and with full knowledge by the auhtorities Jeanette Meister produced a cannabis extract, which was taken as drops, for about 100 patients. In the past years the Swiss authorities usually tolerated the medical use of cannabis products.

Science: Cannabidiol may be effective in preventing bovine spongiforme enzephalopathy (mad cow disease). According to basic research of scientists of the National Centre for Scientific Research in Valbonne, France, cannabidiol (CBD) may prevent the development of prion diseases, the most known being BSE (bovine spongiforme enzephalopathy), which is often called mad cow disease. It is believed that the BSE may be transmitted to human beings. In humans, it is known as
Creutzfeldt-Jakob disease. The infectious agent in prion diseases is believed to be a specific type of misfolded protein called prion. Misfolded prion proteins carry the disease between individuals and cause deterioration of the brain. The French researchers reported that the non-psychoactive cannabis constituent CBD inhibited the accumulation of prion proteins in both mouse and sheep prion-infected cells, whereas other cannabinoids were either weak or not effective. Moreover, after infection with mouse scrapie, a prion disease, CBD limited accumulation of the prion protein in the brain and significantly increased the survival time of infected mice. CBD inhibited the nerve damaging effects of prions in a concentration-dependent manner. Researchers noted that CBD may be a promising agent for the treatment of prion diseases.