Canada's self - proclaimed "Prince of Pot" was escorted out of B.C.  Supreme Court and into jail Monday to await extradition to the U.S., where he is to serve up to five years in prison for shipping marijuana seeds across the border. Marc Emery, 51, was indicted in 2005 along with two associates on drug and money-laundering charges stemming from a lucrative mail-order pot-seed business run out of Emery's Vancouver book and paraphernalia shop, which also doubled as B.C.'s Marijuana Party headquarters. 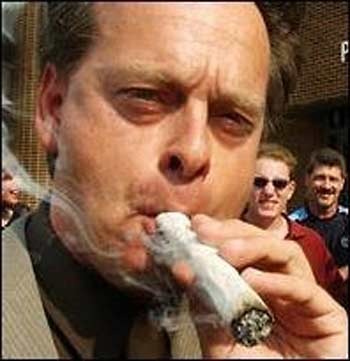 Two charges Emery faced - conspiracy to distribute marijuana and conspiracy to engage in money laundering - were dropped in exchange for his guilty plea on the charge of conspiracy to manufacture marijuana. He has agreed to a five-year imprisonment plea bargain in connection with his $3-million a year marijuana seed catalogue business, where most of his customers were American. As Emery left the tiny courtroom, his wife Jody wept in the public gallery while a crowd of the cannabis crusader's followers chanted: "Free Marc Emery!" As he was led away, he yelled: "I love you Jody Emery.  Plant the seeds of freedom; overgrow the government!"

Almost 13 years after California became the first state to allow the sale of marijuana for some medical conditions storefront purveyors of the drug are nearly as easy to find as a taco stand. Yet police and prosecutors say the law is vague on who can sell pot and in what circumstances.  They worry that the state unwittingly created safe havens for drug pushers who are doping the population with immunity.

"They appear to be run by drug dealers who see an opening in the market and a way to make a fast buck," says San Diego district attorney Bonnie Dumanis, who says every pot store her office has looked at is operating illegally. The tangle of regulations and alleged criminality that has followed in the aftermath of California's first-in-the-nation law allowing medical marijuana is hardly restricted to the Golden State.

Thirteen states, from New England to the Pacific Northwest, have passed laws by ballot or legislative action permitting marijuana possession for some medical reasons even though the drug is illegal under federal law. Some, like Rhode Island, where a medical-marijuana law passed in 2006, officials are still trying to figure out how to set up places where people can buy the drug.

In Colorado, which approved sales of medical marijuana in 2000, cities are passing moratoriums to halt the blossoming of marijuana stores.  New Mexico's lone non-profit licensed to distribute pot is overwhelmed by demand. In Washington state, a legal dispute rages over whether the law permits people to just grow their own pot or also buy it from dispensaries. Stewart Richlin, lawyer for more than 150 medical-marijuana collectives in Southern California, says states that legalize medical marijuana must accept the commerce that follows.

"Once we acknowledge patients have a right to cannabis, they have to get it somewhere," he says. Los Angeles Police Lt.  Paul Torrence says the department investigated a clinic in the fashionable Venice area that was doing up to $140,000 in sales a month.  In San Diego, where authorities this month shut down 14 sellers of medical marijuana, Dumanis said at least one was operating on that scale as well, over $700,000 in six months. City Council members Janice Hahn and Dennis Zine, in proposing Los Angeles tax sales of medical marijuana, point to Oakland, where they say four licensed dispensaries had gross sales of $19.6 million in 2008.

"It's a very, very profitable business," says Torrence, of LAPD's gang and narcotics division.  "That's clearly outside the boundaries of the voters' intention in passing Prop 215." Torrence says there are more than 400 registered with the city.  But there may be many more - as many as 800 applications have been filed and many operate without approval, says Jane Usher, special assistant city attorney.

- No Arrests, Some Tickets, in Wake of State Decrim Vote.

The 20th annual Boston Freedom Rally brought an estimated 30,000 people to Boston Common on Saturday, September 19, to support the reform of marijuana laws. That would make the Freedom Rally the second largest marijuana reform event in the country, behind only the Seattle Hempfest.

All afternoon, tens of thousands of people sat in the sun, listening to speakers extolling the virtues of cannabis and calling for its legalization and bands rocking out for the cause. At 4:20pm, a massive cloud of marijuana smoke rose from the Commons as the crowd celebrated the stoner holiday (or time of day).

Sponsored by MassCann, the Bay State affiliate of the National Organization for the Reform of Marijuana Laws (NORML), the Freedom Rally had in some past years been marred by arrests for pot-smoking. In a previous article, Drug War Chronicle predicted that the rally would see "numerous arrests -- if police behavior in the past is any indicator." That was an overstatement -- our apologies to MASSCANN for it. 2007 did see 53 arrests at the Freedom Rally, according to Boston Police -- one of them of NORML founder Keith Stroup. But even that number, while significant, was a fraction of a percent of the attendees. Last year, the number of possession busts was down to just six. And this year there were none.

Massachusetts residents voted to decriminalize marijuana possession last November, and so all the police could do this year was issue tickets with a maximum fine of $100, which they did to 136 people. Three others were arrested for marijuana distribution, and another three on unspecified charges.  Still, participants and organizers of the festival alike lauded the relative freedom of living in a decrim state, while decrying the presence of undercover officers who, apparently randomly, would select members of the crowd to be searched and hassled. On its web site, Freedom Rally organizers have asked that people who were ticketed or searched by police contact them.