Portugal: The Leftist Bloc (Bloco de Esquerda) is preparing legislation that would legalize the possession, cultivation, and retail sales of small amounts of marijuana, as well as providing for regulated wholesale cultivation to supply the retail market. The Bloc is also now actively encouraging the participation of ENCOD, the European Coalition for Just and Effective Drug Policies, in developing new drug laws. 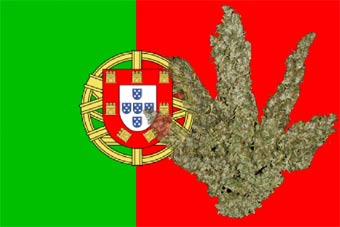 Portugal: Marijuana LegalizationLegislation in the Works

The alliance comes too late to influence the marijuana bill, but will provide an entree for drug reformers in the process in future drug legislation, or even revising the current marijuana bill if it does not make in through parliament this year. "The contacts between ENCOD and the Bloc were arranged by common activists and members," explained ENCOD steering committee member and Portuguese law student, journalist, and activist Jorge Roque.

Under the draft bill, a copy of which was made available to the Chronicle, marijuana consumers could purchase "the amount needed for the average individual for a 30-day period," as determined by the existing decriminalization law, or 15 grams of hashish and 75 grams (almost three ounces) of marijuana. The average daily dose is a half-gram of hash and 2.5 grams of pot. Individuals would be allowed to grow up to 10 plants, and could possess the 30-day amount as well as up to 10 plants. The draft bill calls for licensed retail sales outlets authorized by municipal councils. Such retail establishments would not be allowed to sell alcohol or allow it to be consumed on the premises, would not be allowed within 500 meters of schools, and would not be allowed to have gambling machines.

No one under 16 would be allowed to enter, nor would people adjudged to be mentally ill. The draft bill prohibits advertising, but requires that packaging for marijuana products intended for retail sale clearly reveal the source, the amount, and a statement giving the World Health Organization's position on the effects and risks of consumption. The bill also provides for the Portuguese National Institute of Pharmacy and Medicine to license the wholesale cultivation of marijuana to supply the retail trade. And it provides for an excise tax on cannabis sales to be determined during the budgetary process.

People who traffic in marijuana outside the parameters set down in the draft would face four to 12 years in prison for serious offenses, and up to four years for less serious offenses. Licensed retailers or wholesalers who breach the regulations could face imprisonment for up to three months or a fine of up to 30 days' minimum wage. The bill's immediate prospects are uncertain. The Leftist Bloc is a small party, holding only eight seats in the 230-seat parliament. But the government is controlled by left-leaning parties, and the Bloc has a reputation as a "hip" party in the vanguard of political change in the country.

In the first ruling of its kind, the California 3rd District Court of Appeal in Sacramento held Wednesday that medical marijuana patients and growers can sue police for illegally raiding their properties and destroying their plants. The ruling came in County of Butte v. Butte County Superior Court. In that case, a Butte County sheriff's deputy went to the home of medical marijuana grower David Williams and demanded he destroy all but 12 of the 41 plants he was growing for a seven-person collective. Williams had complete documentation for his grow, but, threatened with arrest, he complied with the unlawful order. He then sued the county and won in Superior Court.

The county appealed, arguing that patients and providers could invoke the state's medical marijuana law only as a defense to criminal charges, not to sue for damages. But the appeals court sided with the lower court, holding that medical marijuana patients and providers have the same right as any other citizens to sue officials who violate the constitutional ban on illegal searches and seizures. Williams was relying on "the same constitutional guarantee of due process available to all individuals," wrote Justice Vance Raye for the 2-1 majority.

Medical marijuana patients and providers do not need to suffer "the expense and stress of criminal proceedings," to assert their rights, he wrote. In a dissenting opinion, Justice Fred Morrison wrote that Congress should ease the federal ban on marijuana to accommodate the 13 states that allow medical use. But in the meantime, he argued, no one has the right to use marijuana, and police can legally confiscate it. The county is likely to appeal to the state Supreme Court. But unless and until that happens, law enforcement in California should be on notice that any misbehavior regarding medical marijuana could turn out to be very expensive.

Voters in Oakland, California, will decide this month whether to create a new business tax aimed at the city's four medical marijuana dispensaries. Mailed ballots went out this week and must be returned to the city registrar's office by July 21 to be counted. The tax measure, known as Measure F, would levy a business tax rate of $18 per every $1,000 in gross sales at dispensaries.

Under the standard retail business tax rate, the dispensaries now pay $1.20 per every $1,000, meaning the new rate would be a whopping 1500% increase. But that's okay with Oakland dispensary operators. In fact, it was the dispensaries that approached Oakland City Councilmembers Rebecca Kaplan and Nancy Nadel about instituting a new tax. Operators say they are willing to pay their fair share to help the city deal with pressing financial problems.

The proposed tax should bring in $315,000 in tax revenues for the city in 2010, up substantially from the $21,000 generated under the retail tax rate last year. It is also an effort to further legitimize medical marijuana in a city that is already pretty pot-friendly. "Criminals don't pay taxes," said James Anthony, an attorney for Harborside Health Center, one of the dispensaries. "Law-abiding citizens do. We are nothing if not law-abiding citizens," he told the Oakland Tribune. Councilmember Kaplan, a prominent medical marijuana supporter, also argued in favor of the measure.

"It is important that there be regulation and that there be a permit process and that there be taxation," Kaplan said. "Both because the city needs the revenue and to be sure that we weed out the bad actors." The ballot measure needs a simple majority to pass. It is also supported by the broad-based Yes 4 Oakland coalition.

The Oregon House Monday passed SB 676 by a veto-proof margin of 46-11. The measure would allow for the production, possession, and commercialization of industrial hemp and its products. The measure passed the state Senate on June 19 an equally veto-proof 27-2 margin.

During the House debate, hemp supporter Rep. Jules Bailey (D-Portland) used visual aids to demonstrate the diversity of hemp products, waving around bags of hemp tortilla chips and non-dairy hemp milk. He also held up a t-shirt emblazoned with the words "Senate Bill 676 is about rope, not dope." "I am glad that Oregon has joined the list of states that have agreed that American farmers should have the right to reintroduce industrial hemp as an agricultural crop," said bill sponsor Sen. Floyd Prozanski (D-South Lane and North Douglas Counties).

"By passing SB 676 with strong bipartisan support, the Oregon legislature has taken a proactive position to allow its farmers the right to grow industrial hemp, to provide American manufacturers with domestically-grown hemp, and to profit from that effort." The industry association Vote Hemp said it was confident Gov. Ted Kulongowski (D) would sign the bill. If he does, or if a veto is overridden, Oregon will become the ninth state to authorize industrial hemp production under state law. It remains forbidden by federal law.

The states that have okayed hemp production are Hawaii, Kentucky, Maine, Maryland, Montana, North Dakota, Vermont and West Virginia. North Dakota has even issued licensed to would-be hemp farmers for the past two years, but the federal prohibition has prevented any hemp planting.

Israel: Significant increase in the number of patients who are allowed to use cannabis for medicinal purposes .

About 700 patients are currently allowed to use cannabis for medicinal purposes and it is expected that the number surpasses 1,000 at the end of this year. The first patients received cannabis in 1999 after the Health Ministry legalized the use of the drug by severely ill patients. "I issue 40 new prescriptions every month, with an average prescription calling for 100 grams per patient per month," says Dr. Yehuda Baruch, the head of the psychiatric hospital Abarbanel in Bat Yam. Baruch is the only physician appointed by the Health Ministry to issue approvals for cannabis.

The Health Ministry committee that decided to permit the medicinal use of cannabis in 1999 stipulated that the drug be given only to patients with extreme symptoms. Until 2005 the prescriptions for medicinal cannabis were given only to ten patients. The ministry allowed them to cultivate up to ten cannabis plants, and to possess up to 200 grams of cannabis. In addition, patients may get cannabis for free from a grower who remains anonymous and is allowed to deliver cannabis to patients. There are several volunteers who are allowed to transport the drug to patients all across the country.

Today cannabis is prescribed by Baruch for a broad array of diseases, among them multiple sclerosis, chronic pain, Tourette syndrome and cancer. The producer of cannabis doesn't receive any payment from the state for the production of the cannabis, and the patients don't pay for it either. However, experts say that it is clear to everyone that this cannot continue, in light of the growing demand and the cost of production. Currently it is unclear who will have to pay for cannabis then. Baruch supposes that patients will have to pay about 5 or 10 shekel (about 0,9 to 1,8 Euros) per gram in the future.

Science: The development of the number of new schizophrenia cases in the UK does not support the hypothesis that cannabis use increases schizophrenia risk.

According to research of scientists at Keele University in Staffordshire, UK, the incidence (the number of new diagnosed cases) of schizophrenia in the years 1996 to 2005 does not support the hypothesis that cannabis use increases the risk for the development of schizophrenia or psychosis. For this study an analysis of data from 183 practices in England, Wales, Scotland and Northern Ireland was conducted.

The study cohort comprised almost 600,000 patients each year, representing approximately 2.3 per cent of the UK population aged 16 to 44. Between 1996 and 2005 the incidence of schizophrenia and psychoses were either stable or declining. A recently published study found that cannabis use increased fourfold between 1972 and 2002 and 18-fold among people under 18 years of age.

If the risk of schizophrenia is elevated 1.8-fold among light users and 3.1-fold among heavy users as suggested by another study, and assuming an elevated risk for 20 years, an increase in schizophrenia incidence of 29 per cent would have been expected between 1996 and 2005. Researches concluded that "the causal models linking cannabis with schizophrenia/psychoses are not supported by this study" and that "the underlying causes of schizophrenia/psychoses remained stable/declined over the study period." (Source: Frisher M, Crome I, Martino O, Croft P. Assessing the impact of cannabis use on trends in diagnosed schizophrenia in the United Kingdom from 1996 to 2005. Schizophr Res. 2009 Jun 26.

Schizophrenia has links to gluten/lectin. Perhaps they should ban that and freely allow hemp use.

thanks for the news.