Pacific Islands: Head of Fiji NGO Calls for Debate on Marijuana Legalization - What to do about marijuana cultivation and consumption is an issue that continues to fester in the South Pacific island republic of Fiji. Pot farmers have battled police to protect their crops and complained to their representatives about being harassed. 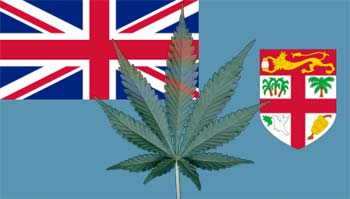 Consumption is high, and good citizens worry about things like pot-smoking by elite athletes. And the Fijan police do what prohibitionist police do: destroy crops and make marijuana busts. Just a few weeks ago, police bragged about seizing $50 million worth of weed from one popular growing region over the past five years. Now, in the latest marijuana policy flare-up, the head of the Fiji Council of Social Services, a non-governmental organization, has called for the government to discuss legalizing marijuana.

In a statement last week thanking the government for taking a dispassionate stance on whether to allow casinos on the islands, council head Hassan Khan suggested the government apply that same dispassionate stance - without injecting religious fervor - toward discussing marijuana legalization. Marijuana sales could provide revenue for Fiji, he said. It already provides an income for many families on the islands. A school principal bemoaning pot-smoking by students said that marijuana farming supported most of his students' families. "It's their livelihood, so the children will see it from there," he said.

-The right of California patients to collective cultivate medical marijuana, and then sue if that right is violated, has been affirmed by the California Supreme Court in another landmark legal victory for Americans for Safe Access.

The court last month refused to review an appellate court ruling that had found for the rights of a seven-patient collective in Paradise. "The California Supreme Court has just told local law enforcement that they must uphold the medical marijuana laws of the state and not hide behind competing federal laws," said ASA Chief Counsel Joe Elford, who litigated the case on behalf of the patients.

Butte County officials had challenged the lower court's ruling, arguing that all members of a patient collective must physically work the garden that produces the cannabis, and that state law only provides an affirmative defense to criminal charges.

- Marijuana advocates are gathering signatures to get as many as three pot-legalization measures on the ballot in 2010 in California, setting up what could be a groundbreaking clash with the federal government over U.S. drug policy.

At least one poll shows voters would support lifting the pot prohibition, which would make the state of more than 38 million the first in the nation to legalize marijuana. Such action would also send the state into a headlong conflict with the U.S. government while raising questions about how federal law enforcement could enforce its drug laws in the face of a massive government-sanctioned pot industry.

The state already has a thriving marijuana trade, thanks to a first-of-its-kind 1996 ballot measure that allowed people to smoke pot for medical purposes. But full legalization could turn medical marijuana dispensaries into all-purpose pot stores, and the open sale of joints could become commonplace on mom-and-pop liquor store counters in liberal locales like Oakland and Santa Cruz.

Under federal law, marijuana is illegal, period. After overseeing a series of raids that destroyed more than 300,000 marijuana plants in California's Sierra Nevada foothills this summer, federal drug czar Gil Kerlikowske proclaimed, "Legalization is not in the president's vocabulary, and it's not in mine." The U.S. Supreme Court also has ruled that federal law enforcement agents have the right to crack down even on marijuana users and distributors who are in compliance with California's medical marijuana law.

At its General Meeting on 2 October the IACM changed its name and the statutes, and elected Ethan Russo from the USA as the new chairman. New members of the IACM Board of Directors are Manuel Guzman from the University of Madrid, Spain, and Arno Hazekamp from the Dutch Association for Legal Cannabis and its Constituents as Medicine (NCSM). The following Board Members were re-elected: Roger Pertwee (UK), Ethan Russo (USA), Willy Notcutt (UK), Franjo Grotenhermen (Germany), Daniela Parolaro (Italy), Mark Ware (Canada), and Rudolf Brenneisen (Switzerland).

The General Meeting noted that the development of medicines that influence the endocannabinoid system comprises an increasing number of substances and the IACM should be attractive to all scientists, physicians and others interested in the medical use of substances that influence the endocannabinoid system. It was decided to choose a new name that reflects this development.  The aims of the IACM are now more clearly expressed.

The new statutes say: "The aim of the association is to advance knowledge on cannabis, cannabinoids, the endocannabinoid system, and related topics especially with regard to their therapeutic potential […]” More in the reader of the conference at: http://www.iacm2009.org

USA/Colorado: According to a newspaper report the amount of people registered  to legally use cannabis for medicinal purposes in Colorado has nearly tripled in the last year to just above 11,000.

Science: Detection of cannabis use

- According to research at the National Institute on Drug Abuse in Baltimore, USA, THC may be detectable for more than 6 days after last cannabis use in blood of regular users of cannabis.

Of 25 participants nine chronic users (36 per cent) had no measurable THC during 7 days of cannabis abstinence; 16 had at least one positive THC of more than 0.25 ng/ml, but not  necessarily on the first day. On day 7, 6 full days after controlled cannabis abstinence, six participants still displayed detectable THC concentrations and all 25 had measurable concentrations of THC-COOH. The highest observed THC concentrations at start of the study (day 1) and day 7 were 7.0 and 3.0 ng/ml,  respectively.

Science: Heritability of cannabis use

- According to a study at the University of Amsterdam with 3115 twins there was a moderate genetic influence (44 per cent) on  initiation of cannabis use.