Norway: Drug agency considers import of cannabis by a Norwegian citizen from a Dutch pharmacy as legal! 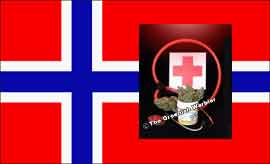 Norway: Drug agency considers import of cannabis by a Norwegian citizen from a Dutch pharmacy as legal!

A Norwegian citizen suffering from post traumatic stress disorder (PTSD) and attention deficit hyperactivity disorder (ADHD) tried to import cannabis of the Dutch company Bedrocan from a Dutch pharmacy to Norway, which was however confisciated by the border police.

Mr Berg wanted to try a treatment with cannabis, which is supported by his doctor. According to an e-mail to the IACM Mr. Berg. received a letter from a juridical adviser under the Health & Social Services (Ombudsman) telling him that the Norwegian Drug Agency has confirmed to them that he did not break the law by bringing cannabis from a Dutch pharmacy to Norway, according to article 75 of the Schengen agreement between European countries.

Mr. Berg is now expecting that he will get his cannabis back from the police.

The city of Utrecht wants cannabis users to grow their own cannabis in a cooperative.

However, it would be illegal, the government said. The use of cannabis is legal but the mass cultivation of cannabis plants is illegal and controlled by criminal groups. "We want to tackle this in the experiment. If you have some users grow the cannabis you remove it from the criminal and illegal scene," a representative of the city said.

Researchers at Utrecht University, The Netherlands, investigated the effects of the coffee shop system in the Netherlands. Dutch coffee shop policy has become more restrictive in recent years and the number of coffee shops has decreased.

Cannabis prevalence rates in the adult population are somewhat below the European average; the rate is relatively high among adolescents; and age of first use appears to be low. Compared to other European countries the use of hard drugs in both the Dutch adult and adolescent population is average to low.

Florida - Some state lawmakers are sponsoring a bill that would make medical marijuana legal in Florida.

At the state legislative session Thursday at the capitol, lawmakers were joined by people suffering from various diseases. They're working together to pass a resolution that could go before voters in 2012. The sponsor of the bill, Democrat Jeff Clemens says the situation is personal to thousands of Floridians. "We have a lot people suffering here in the state of Florida.

I don't think we need to be telling them that prescription narcotics are the way to go, when we have other, more natural avenues for them,” he said. If the bill is approved by lawmakers and voters, supporters claim the sale of medical marijuana could generate $5 million to $12 million a year in tax revenue for the state.

According to the research at the Cajal Institute in Madrid, Spain, cannabidiol (CBD) was able to modulate the function of microglia, immune cells in the brain, in a mouse model of Alzheimer's' disease. Scientists noted that "given that CBD lacks psychoactivity it may represent a novel therapeutic approach for this neurologic disease."