USA: Inspired by the recent success of former U.S. Vice President Al Gore in awakening the world to the dangers of global warming by receiving the Nobel Peace Prize for his advocacy work, the National Organization for the Reform of Marijuana
Laws (NORML) is beginning the New Year by coordinating the nomination of the Netherlands for a Nobel Prize for its achievements in minimizing drug use in its citizens, while at the same time restricting imprisonment. With few peers at the international level and despite tremendous pressure from the United States, the Dutch government and its people have proven for more than 30 years that it is more cost effective, humane, and practical to be "smart on drugs" rather than "tough on drugs." 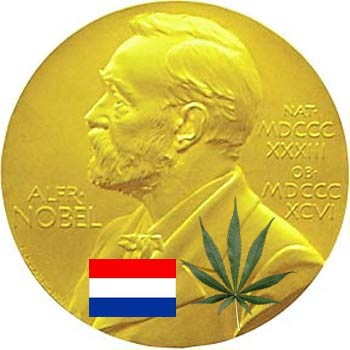 USA: The United States, home of the world's largest prison population, could save 20 billion US dollars a year and cut that population in half by adopting a handful of systemic reforms, including decriminalizing drug possession, said a prestigious group of social scientists in a report with the title "Unlocking America". Of 100,000 citizens 737 are imprisoned in the USA, compared to 607 in Russia, 487 in Cuba and 98 in Germany (in the years 2004 or 2005). The report is available online at:
http://www.jfa-associates.com/publications/#srs.

Europe: According to the recent annual report of the EMCDDA (European Monitoring Centre for Drugs and Drug Addiction) the use of cannabis increased in the 1990s. "However, some of the more recent data suggest that the upward trend is levelling off, albeit at historically high levels." According to the report "estimates suggest that more than 23 million European adults have used cannabis in the last year, producing an average figure of about 7 % of all 15- to 64-year-olds." The use by children below the age of 15 is very low. The Annual Report 2007 is available in 23 languages on the website of the EMCDDA (http://www.emcdda.europa.eu/).

Science: THC vs Alzheimers - Scientists at The Scripps Research Institute have found that the active ingredient in marijuana, tetrahydrocannabinol or THC, inhibits the formation of amyloid plaque, the primary pathological marker for Alzheimer's disease. In fact, the study said, THC is "a considerably superior inhibitor of [amyloid plaque] aggregation" to several currently approved drugs for treating the disease. See http://www.scripps.edu/news/press/080906.html for more.

Science: According to animal research at the University of Calgary, Canada, pain reducing effects of cannabinoids are increased in animals with arthritis compared to healthy animals. (Source: Schuelert N & McDougall JJ. Arthritis Rheum 2007;58(1):145-
153.)

Science: Researchers of the University of Rostock, Germany, investigated the mechanisms by which cannabinoids reduce the invasion of cancer cells into surrounding tissues. Human cancer cells were treated with THC or a synthetic cannabinoid (methanandamide) and cell invasion through a gel was measured. Suppression of cell invasion by cannabinoids was concentration-dependent with a decrease of invasion by the lowest dose of THC (10 nM) of 68 per cent. Researchers concluded that "cannabinoids may therefore offer a therapeutic option in  the treatment of highly invasive cancers." (Source: Ramer R & Hinz B. J Natl Cancer Inst 2007 Dec 25 [Electronic publication ahead of print])