New Zealand: Police forecast record pot crop. Northland's cash crop cannabis looks set for a bumper season with two plots discovered by trampers near Whangarei. The plots were well developed and covered in netting to protect them from pests. The latest cannabis find confirms the drug's popularity has not waned despite the burgeoning methamphetamine trade. Head of the Northland police organised-crime squad, Detective Sergeant Grant Smith, expected to find and seize a record number of cannabis plants this growing season. "Over the past five years, cannabis-plant seizures have been steadily increasing. Cannabis is still the base funding for other drug and criminal offending," he said. There was a trend back to larger, more commercial crops in Northland with police discovering a plot with nearly 1000 plants near Kaitaia earlier this year. Outdoor plots with between 300 and 500 plants were common in the region, Mr Smith said. 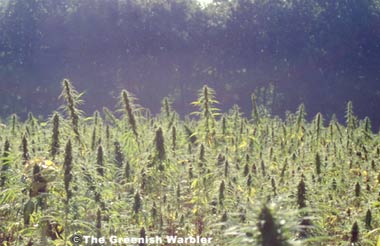 Cannabis crops are blooming and booming also in New Zealand.

USA: The San Francisco metropolitan area has a higher percentage of people who are regular drug users than any other major metropolitan area in the USA, a study from the Substance Abuse and Mental Health Services Administration found. Nearly 13% of San Francisco residents reported using some type of illicit drug, such as marijuana, cocaine or heroin, in the previous month, according to data from the National Surveys on Drug Use and Health 2002-05. The national average is 8.1%. Other areas with drug-abuse rates higher than the national average included Seattle, 9.6%; Detroit, 9.5%; Philadelphia, 9.1%; and Boston, 8.5%. Cities with the lowest drug use: Houston, 6.2%; and Washington, Dallas and Riverside/San Bernardino, Calif., all at 6.5%. California has decriminalized marijuana for people with health problems. The state's voters passed Proposition 215 in 1996 to allow seriously ill state residents to possess and use marijuana with a doctor's prescription. In San Francisco, police and prosecutors accept a medical-marijuana identification card as proof that a resident can possess and use marijuana. "The fact that state law allows the use of medical marijuana and that we have a population with a high rate of AIDS that might need to use medical marijuana may contribute to the rates," says Alice Gleghorn, deputy director of community behavioral health services in San Francisco's Department of Public Health. "We do have a cultural regional norm with regard to medical-marijuana use." The coastal area north of San Francisco, included in the study as part of the metropolitan area, is known as a popular marijuana growing spot. "Where marijuana is very accessible, you're going to get higher use," Gleghorn says.

USA/South Carolina: A new bill proposed last week by a South Carolina senator would legalize the use of marijuana for medical applications. Sen.  William Mescher, R-Pinopolis, introduced the legislation Tuesday, which has since been referred to the Senate's Committee on Medical Affairs. Mescher said his reasoning behind the controversial concept stems from the death of his first wife about 24 years ago from lung cancer. He said he recalled doctors at the time telling him some of her symptoms could have been eased with the use of medical marijuana, which has the effect of easing the nausea associated with cancer treatments such as chemotherapy. "To me, it's no different than morphine or any other painkiller that a doctor can prescribe," he said.  "Some doctors say it doesn't help.  But if the person thinks it's helping them, then it's helping them." This isn't Mescher's first time at bat while defending a hot issue at the Statehouse in Columbia.  For about a decade, he pushed for legalizing tattooing in South Carolina so it could be regulated in the interest of protecting public health. He said he expects this new measure will become a highly contested matter, as well, but he plans to move forward with it just as he did with the controversial tattoo bill.

Canada: An Ottawa man was sentenced to six months in jail yesterday for failing to pay nearly $50,000 in taxes on revenue from growing marijuana. Van Hai Le, 36, was given the jail time in lieu of a fine, following a Dec.11 guilty plea to one count of income tax evasion.