New ‘matrix of harm’ for drugs of abuse

New ‘matrix of harm’ for drugs of abuse


A new study published in the British medical magazine “Lancet” proposes that drugs should be classified by the amount of harm that they do, rather than the sharp A, B, and C divisions in the UK Misuse of Drugs Act. The new ranking places alcohol and tobacco in the upper half of the league table. These socially accepted drugs were judged more harmful than cannabis (rank 11 only!), and substantially more dangerous than the Class A drugs LSD, 4-methylthioamphetamine and ecstasy. Harmful drugs are currently regulated according to classification systems that purport to relate to the harms and risks of each drug. However, these are generally neither specified nor transparent, which reduces confidence in their accuracy and undermines health education messages. Professor David Nutt from the University of Bristol, Professor Colin Blakemore, Chief Executive of the Medical Research Council, and colleagues, identified three main factors that together determine the harm associated with any drug of potential abuse: The physical harm to the individual user caused by the drug,  the tendency of the drug to induce dependence and the effect of drug use on families, communities, and society. Within each of these categories, they recognized three components, leading to a comprehensive 9-category matrix of harm. Expert panels gave scores, from zero to three, for each category of harm for 20 different drugs. All the scores for each drug were combined to produce an overall estimate of its harm. In order to provide familiar benchmarks, for comparison with illicit drugs, five legal drugs of potential misuse (alcohol, khat, solvents, alkyl nitrites, and tobacco) and one that has since been classified (ketamine) were included in the assessment. The process proved simple, and yielded roughly similar scores for drug harm when used by two separate groups of experts. Professor David Nutt, lead author on the paper, said: “Drug misuse and abuse are major health problems. Our methodology offers a systematic framework and process that could be used by national and international regulatory bodies to assess the harm of current and future drugs of abuse.”

Nevertheless, in Great Britain there`s much public panic about cannabis right now. Even slogans such as “Get tough on skunk or more will die!” (Majorie Wallace, chief executive of the charity SANE)  can be heard. Wallace said that “addicts will kill more people unless the Government takes tougher action against super-strength cannabis, a mental health charity has warned. She called for an education campaign to teach young people that skunk  was highly dangerous and for special mental health units to treat  users suffering from schizophrenia. Ms Wallace said: "The latest figures show 79 per cent of school children think cannabis is both harmless and legal, but we clearly need to have a much stronger message that it can devastate the mind.
It's like giving school children loaded guns." Last month an 18-year-old cannabis user was jailed for the frenzied murder of two school friends and earlier this week a teenager addicted to skunk admitted to stabbing a grandmother to death. Ms Wallace said the killings could have been prevented if there was more rigorous control of the drug. 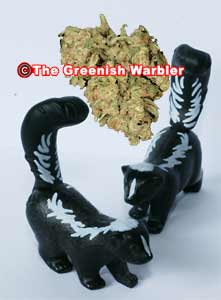 USA: Former New York police captain speaks about legalizing. Former police captain Peter Christ spent 20 years battling drugs from behind his badge. Now, the retired, 20-year veteran of the Tonawanda, N.Y., police department is fighting from behind a microphone and with a different message than many may imagine. Christ, who retired in 1989 from his department north of Buffalo, N.Y., is the founder of Law Enforcement Against Prohibition, or LEAP, an organization that seeks to legalize and regulate certain drugs. "LEAP is a group which believes drug regulation and control is a better policy choice than prohibition to deal with serious drug problem in our society," said Christ.  "Seventy-five percent of drug related violence is not associated from the use of drugs, but from people fighting over the market place." In other words, it's drug dealers that are to blame.  With regulations, similar to those used for tobacco or alcohol sales, police and government officials would be able to better influence the market and reduce the violence. Christ says violence and crime will go down if that market place is removed, but people often respond cynically to LEAP's proposal to remove it. "The only way to regulate anything is if it is legal," he said.  "Once you make it illegal, it goes to the underground, and turns to gangsters and terrorists who settle their issues out of court with guns and violence," said Christ. "We at LEAP believe that all drugs have so much potential to do harm to individuals and society that they must be regulated and controlled.  Everyone says 'Of course,' but then I tell them the reality that we currently have a policy in effect that gives us zero control over controlling these drugs," he said. "Noam Chomsky is a member of LEAP," he said.  "Milton Freedman until his death was a member of LEAP.  This is not a left or right issue.  It's a failed policy issue."