Colombia and Peru are the world's top cocaine producers. Mexico is the leading hemispheric producer of marijuana and opium, as well as being the home to some of the world's wealthiest and deadliest drug trafficking organizations. 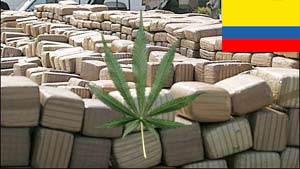 "We are entering the era of the drug trafficking business where one must have these types of reflections," Santos said. "President Calderon is right to call for this to be discussed, without meaning that one is in agreement or not with the position of legalization." Santos eyed California's Proposition 19 marijuana legalization initiative with mixed feelings.

"How would we explain to an indigenous person on a Colombian mountain that producing marijuana is illegal and take him to jail or destroy the marijuana when in the US it is legal to consume it?" he asked.

Internet: Proponents of marijuana legalization, which is on the California ballot in 2010, have hit a Facebook wall in their effort to grow an online campaign to rethink the nation's pot laws.

Facebook initially accepted ads from the group Just Say Now, running them from August 7 to August 16, generating 38 million impressions and helping the group's fan page grow to over 6,000 members. But then they were abruptly removed. Andrew Noyes, a spokesman for Facebook, said that the problem was the pot leaf.

"It would be fine to note that you were informed by Facebook that the image in question was no long[er] acceptable for use in Facebook ads. The image of a pot leaf is classified with all smoking products and therefore is not acceptable under our policies," he told the group in an email, which was provided to HuffPost.

Canada: Toronto City Council voted to endorse the Vienna Declaration on Thursday, raising a loud voice against the war on drugs.

“The war against drugs has failed,” said city councillor Kyle Rae, who brought the declaration to council after attending the AIDS 2010 international conference this July, where it was announced. “In every jurisdiction and in every community, we know that policing this issue is not enough.”

The principles of the declaration favour a public health approach to dealing with drug addicts, rather than enforcing ever-stricter drug laws, which advocates say doesn’t work, and in fact can cause greater harm.

Canada: Electric Car Made of Hemp to Be Made in Canada

Calgary's Motive Industries announced it would introduce an electric car whose bio-composite body is made from hemp.

The prototype of the four-passenger, zero-emission vehicle, known as the Kestrel, is to be unveiled at an electric mobility trade show in Vancouver in September and would be the first of its kind in Canada.

In an absolutely unsurprising turn of events, current head of the Office of National Drug Control Policy Gil Kerlikowske and five former drug czars have come out against Proposition 19, California's marijuana legalization initiative.

The six bureaucratic drug warriors all signed on to an op-ed, Why California Should Just Say No to Prop 19, published in the Los Angeles Times Wednesday. Joining Kerlikowske in the broadside against legalization were former drug czars John Walters, Barry McCaffrey, Lee Brown, Bob Martinez, and William Bennett.

The drug czars claim that Prop 19 supporters will "rely on two main arguments: that legalizing and taxing marijuana would generate much-needed revenue, and that legalization would allow law enforcement to focus on other crimes." Then they attempt to refute those claims. Noting that marijuana is easy and cheap to cultivate, the drug czars predict that, unlike the case with alcohol and tobacco, many would grow their own and avoid taxes. "Why would people volunteer to pay high taxes on marijuana if it were legalized?" they asked. "The answer is that many would not, and the underground market, adapting to undercut any new taxes, would barely diminish at all."