The owner of the Checkpoint coffee shop in Terneuzen near the border with Belgium will stand trial in the district court in Middelburg with 16 others, including a manager and suppliers, in what is widely seen as a test case. The 58-year-old owner, whose name prosecutors refused to divulge, was charged after being caught storing more than the allowed quantity of cannabis on site. 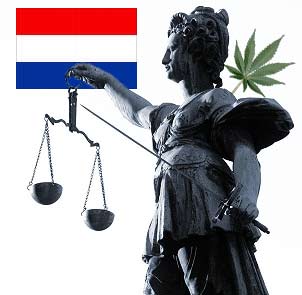 Investigators said they found 120 kilogrammes (265 pounds) of marijuana on the premises in 2007 and another 110 kilos (242 pounds) last year. Before it was closed in May 2008, Checkpoint counted between 2,000 and 3,000 clients a day, mainly Belgian and French. The Netherlands' 700-odd licensed coffee shops are allowed to keep no more than 500 grammes (1.1 pounds) of cannabis on their premises, while clients are limited to five grammes (.18 ounces) per purchase. The limits are often flouted.

"This is the biggest-ever case of its sort," Middelburg prosecution spokeswoman Elke Kool told AFP. "We are dealing with a real criminal organisation here." The Netherlands decriminalised the consumption and possession of under five grammes of cannabis in 1976. Cannabis cultivation and mass retail remains in the hands of criminal organisations in a black-market business worth some two billion euros (three billion dollars) per year.

The Netherlands has recently been taking an increasingly tough stance on recreational drug use, citing what critics see as a nuisance created by millions of drug tourists who cross the border every year. "We have had a lot less trouble since the closure of Checkpoint, about 80 percent of whose clients were foreigners," Terneuzen city council spokesman Daniel Rouw told AFP. The town of 55,000 inhabitants now has only one coffee shop, which attracts some 600 clients daily - "a more reasonable number", he said.

The national Dutch government announced plans in September to limit drug tourism by reserving hundreds of cannabis-vending coffee shops for locals. A cabinet statement at the time said, "the sale of hashish and cannabis in coffee shops must be limited and aimed solely at the local user". A draft new drugs policy is to be presented to parliament by year-end.

As it is being drafted, many cities and towns have started taking their own curtailment measures. Amsterdam has said it will halve its number of coffee shops, citing criminality, while other cities are to close those within a certain distance around schools. In the southern Limburg province, 30 coffee shops announced recently they would become private members' clubs from next year and reduce the daily limit from five to three grammes per person.

Roosendaal and Bergen-op-Zoom, two other southern border councils, last month withdrew the cannabis-selling licences of their eight coffee shops in a bid to rid the cities of some 25,000 drug tourists per week.

Professor Nutt's ranking system placed cannabis, LSD and ecstasy below alcohol and tobacco. The Government’s chief drug adviser has criticised ministers’ decision to reclassify cannabis back to class B.  Professor David Nutt, who is chairman of the Advisory Council on the Misuse of Drugs (ACMD), also claimed that ecstasy, LSD and cannabis are less dangerous than alcohol and cigarettes.

Prof Nutt made his comments in a lecture and briefing paper for the Centre for Crime and Justice Studies at King’s College London. His briefing accused former Home Secretary Jacqui Smith of “distorting and devaluing” scientific research when she made the decision to reclassify cannabis. He played down the risks of psychotic illness associated with cannabis, arguing that it is safer than tobacco and alcohol.

After cannabis was downgraded to class C in 2004, judges, police, parents and mental health experts called for the move to be reversed because of the damage it caused. There are now more than 22,000 people a year, almost half under the age of 18, being treated for cannabis addiction. In 1997 the number was 1,600. Defending his attitude to cannabis on the BBC’s Today Programme, Prof Nutt said that in the last ten years “there has not been anything we have seen to suggest that it is more dangerous than class C drugs”. In his lecture Prof Nutt said:

“We have to accept young people like to experiment – with drugs and other potentially harmful activities – and what we should be doing in all of this is to protect them from harm at this stage of their lives. Prof Nutt’s paper included a ranking system comparing the relative harm of legal and illegal drugs. His ranking placed alcohol fifth, behind drugs such as heroin and cocaine. He placed tobacco ninth, with cannabis eleventh, LSD fourteenth and ecstasy eighteenth. He said:

“We need a full and open discussion of the evidence and a mature debate about what the drug laws are for — and whether they are doing their job.”
Meanwhile a second drug adviser to the government has resigned in protest at Home Secretary Alan Johnson's sacking of his chief drugs adviser, Prof David Nutt. Marion Walker's departure from the Advisory Council on the Misuse ofDrugs came after Dr Les King's resignation. Mr Johnson said Prof Nutt was sacked for "crossing a line" into politics.

- A police officer who once confronted Sen. John McCain about marijuana decriminalization is being silenced and possibly pushed out of his job with a New Hampshire police force for speaking out against marijuana prohibition, his supporters say.

Bradley Jardis, an officer with the Epping Police Department, is challenging a six-day suspension he received after reportedly getting into a heated argument with a supervisor. According to blogger David Bratzer, Jardis received the suspension after refusing an "illegal" request from his bosses to refrain from speaking to the media.

Jardis is an outspoken critic of marijuana prohibition and a supporter of medical marijuana laws, as well as a member of Law Enforcement Against Prohibition, pro-legalization group. Jardis was featured earlier this year in an article in the Manchester, New Hampshire, Union-Leader profiling police officers who object to the drug laws they enforce.

Jardis also penned an op-ed in April for the Union-Leader in which he spoke in favor of a proposed medical marijuana law for New Hampshire. Sometime after those two articles appeared, Jardis began to experience pressure from his employers, his supporters allege.

Only 14.6% of Chileans support marijuana legalization, down from 19% five months ago, according to a newly released Ipsos poll. Some 56% of Chileans reject legalizing marijuana for any reason, the poll found. The news is slightly better on the medical marijuana front.

There, support has risen to 28.5%, up from 21.7% in June. Chile is one of the most socially conservative countries in Latin America. Abortion is illegal there, and divorce became legal only five years ago. Homosexuality became legal a decade ago, but the country does not have an anti-discrimination law that includes sexual orientation. Marijuana has become something of an issue in the country's presidential elections.

Former Socialist Party leader Marco Enriquez-Ominami, who is running as an independent has said that he "is a supporter of looking into the matter of legalizing marijuana." But Eduardo Frei, candidate of the ruling left-leaning Concordance of Parties for Democracy (CPD) responded in a recent debate that he opposes pot legalization. "All drugs are addictive and they lead to harder drugs," he said. The first round of the Chilean presidential election is set for December 11.

- In an opinion released Thursday, the Colorado Court of Appeals has ruled that persons designated as "caregivers" under the state's medical marijuana law must do more than merely supply marijuana to patients. In so doing, the court upheld the conviction of a Longmont woman, Stacy Clendenin, who argued that marijuana she grew in her home was distributed to authorized patients in dispensaries.

That wasn't good enough for the appeals court. Caregivers authorized to grow marijuana for patients must actually know the patients they are growing for, the court said. "We conclude that to qualify as a 'primary care-giver' a person must do more than merely supply a patient who has a debilitating medical condition with marijuana," the court ruled. The ruling, if upheld on appeal, threatens to put a crimp in Colorado's burgeoning medical marijuana industry.

Dozens of dispensaries have sprung up in the state this year, and growers have been supplying some of them. That has sparked calls for reining in the dispensaries, a call that was echoed in a concurring opinion to the ruling. In his concurrence, Judge Alan Loeb wrote that Colorado's constitutional amendment legalizing medical marijuana "cries out for legislative action."