Middle East: Dubai Court Sentences Woman to Life for Selling a Joint. A court in Dubai, the United Arab Emirates, has sentenced a young woman to life in prison for selling a joint to an undercover officer and possessing 16 more weighing a total of 19 grams. According to the UAE news site 7 Days, the unnamed Tanzanian citizen in her 20s was caught after police received a tip she was running a "drug den" in the Diera area of Dubai. 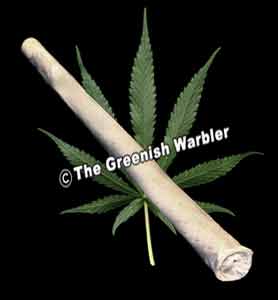 An Emirati police officer told the Dubai Court of First Instance that they had been tipped in December that the woman was selling drugs from her apartment. "Our sources informed us that she used her flat in Deira area of Dubai as a drugs den and she was trading with customers there," the Emirati officer said. "We sent an undercover policeman to her flat and he bought a cigarette for dhs30.

She was possessing many cigarettes full with marijuana and she confessed to us that she used to sell them for dhs30 each." That converts to about $8.10. At the same per joint rate, the young woman's entire stash would be worth less than $130. The woman also tested positive for unspecified drugs. That alone is enough to get you imprisoned in the UAE, which has snared not only its own citizens but also unwary travelers passing through Dubai International Airport, who with depressing regularity receive four-year prison sentences for a positive drug test or possession of even the tiniest detectable traces of drugs.

The young woman had denied all charges. Her lawyer has vowed to appeal, but barring a successful appeal or pardon, she would not be eligible to be released and deported for at least 25 years. Dubai court officials were fine with that. "The law orders us to sentence anyone trading with any amount of drugs to life in jail. Even if the amount is a few grams, it's still trading," one told 7 News. "This verdict is sending out a clear message to anyone trading with drugs that this business can ruin your life." Or, more accurately, the Dubai courts can.

Hawaii: Hawaii Insurer Denies Woman Transplant Because of Pot Use.

Waimea, Hawaii, resident Kimberly Reyes died July 27 at Hilo Medical Center, 10 days after her insurance provider denied the liver transplant she needed because she had tested positive for marijuana in a series of toxicology tests. Reyes was not a registered medical marijuana user, but her family told the Honolulu Advertiser she had used it to deal with nausea, pain, and disorientation caused by the hepatitis that killed her. Reyes' attorney, Ted Herhold of San Francisco, told the Observer that the diagnostic test results were the sole basis for Hawaii Medical Service Association's (HMSA) denial of transplant coverage.

Reyes' husband Robin, and her mother, Noni Kuhns, said the decision was based on failure to comply with HMSA's policy forbidding drug use, but that neither HMSA nor her doctors had told her just what that policy was. "Just because someone takes a hit off of a joint doesn't mean that it should be the end of their life - this is not a reason to deny life," said Kuhns. HMSA has refused to comment or provide its policies on drug use and transplant approval. Denial of transplants to marijuana users has happened before. Last year, Seattle-area musician Timothy Garon died after being refused a transplant because of doctor-recommended medical marijuana use. In 2003, Oregon resident Dave Myers was removed from a transplant list merely for Marinol, a prescription medicine related to marijuana.

The bill removes all state legal obstacles to growing hemp for food, fiber, and other industrial purposes. Industrial hemp production remains prohibited under federal law. The bill passed the House by a vote of 46-11 and the Senate by an overwhelming margin of 27-2. It sets up a state-regulated program for farmers to grow hemp. "I am glad that Oregon has joined the other states that have agreed that American farmers should have the right to reintroduce industrial hemp as an agricultural crop," said Prozanski.

"By signing SB 676 into law, which passed the Oregon Legislature with strong bi-partisan support, Governor Kulongoski has taken a proactive position allowing our farmers the right to grow industrial hemp, to provide American manufacturers with domestically-grown hemp, and to profit from that effort. Oregon's federal delegation can now take this law to the US Congress and call for a fix to this problem, so American companies will no longer need to import hemp and American farmers will no longer be denied a profitable new crop," said Patrick Goggin, director of the industry lobbying group Vote Hemp.

"Under current federal policy, industrial hemp can be imported, but it cannot be grown by American farmers. Hemp is an environmentally-friendly crop that has not been grown commercially in the US for over fifty years because of a politicized and misguided interpretation of the nation's drug laws by the DEA." The eight other states that have removed barriers to hemp production or research are Hawaii, Kentucky, Maine, Maryland, Montana, North Dakota, Vermont and West Virginia. Oregon joins North Dakota as the only states that do not require farmers to obtain federal permits from the DEA to grow hemp.

Marijuana's painkilling properties are being called into  question by research that suggests the drug can amplify and prolong  pain in some cases, rather than relieve it. A study in the current issue of Science suggests prescribing marijuana for pain relief, which is legal in several countries including Canada, may be counter-productive.

Experiments with rodents and humans found that a group of compounds that includes cannabinoids, the active ingredients in marijuana, can interfere with the body's mechanisms to stop pain signals from  reaching the brain. "If you had a toothache, you probably wouldn't want to treat it with marijuana, because you could actually make it worse," said University of Texas Prof. Volker Neugebauer, a study author.

"For more pathological conditions like neuropathic pain, where the problem is a dysfunction within the nerves themselves and a subsequent disturbance throughout the nervous system that's not confined to the pain system, marijuana may be beneficial." Researchers from the U.S., Switzerland, Hungary, Japan, Germany, France and Venezuela collaborated on the new research. They found endocannabinoids in the spinal cord suppress the body's ability to put "the brakes" on pain signals, leaving pain with a straight road
to the brain.