USA: California's budget impasse has passed the one-month mark, social services aren't getting state-funded help they need to stay open, and other legislative priorities are being put off the table until the legislature can come to agreement. One California resident thinks he has the answer: Legalize the growth and sales of marijuana. Clifford Schaffer, who runs a marijuana advocacy web site in his spare time from his day job as a computer programmer, says that California could
easily clear up the $700 million budget gap still facing state lawmakers, and as a plus, the measure could even help improve national security. He has started a petition, and the number of those supporting his idea is growing rapidly. "We would honestly hope that they take our suggestion. Failing that, you know, what are the
options?" Schaffer said in a telephone interview from his Agua Dulce, Calif., home. Otherwise, he said, "They're going to send another few billion to the drug lords in Mexico who are challenging the Mexican government." Citing a study that estimates gross U.S. spending on marijuana at roughly $10 billion a year, he said California could corner the market on taxes gleaned from a legalized marijuana trade, generating $1 billion in revenues. That money would stay within the state instead of going to foreign drug cartels. The governor's office on Thursday dismissed the notion. "We're not responding to publicity stunts, which is what I think that is," said Aaron McLear, press secretary to Gov. Arnold Schwarzenegger.

USA: According to statistical data on cities in California, Colorado,
Washington State and Oregon, presented by researchers of the Texas A&M Health Science Center there was no influence of medical cannabis laws on the extent of illegal cannabis use. The scientists assume that the "use of the drug by those already sick might 'de-glamorise' it and thereby do little to encourage use among others."

USA: The Health Department of New Mexico does not intend to grow and distribute cannabis. The Health Department of New Mexico said on 15 August that it will not comply with the portion of the new medical cannabis law that requires it to oversee production and distribution of the drug. "The Department of Health will not subject its employees to potential federal prosecution, and therefore will not distribute or produce medical marijuana," said Dr. Alfredo Vigil, who heads the agency. The department will continue to certify patients as eligible to possess cannabis, protecting  them from state prosecution, Vigil said. Thirty patients have been approved to participate in the program since the law took effect 1 July 2007. The state
Department of Health and its employees could face federal prosecution if they implement that part of the law which deals with the state-licensed production and distribution of the drug, the attorney general of New Mexico wrote in a letter of 6
August. The law requires the department to issue rules by 1 October for licensing producers and developing a distribution system. That provision is unique in the laws of the 13 states that have legalized the medical use of cannabis.

Canada: Health Ministry approves cannabis extract for the use in
cancer pain. On 7 August GW Pharmaceuticals and Bayer announced that Health Canada has approved Sativex, a cannabis extract with equal concentrations of dronabinol (THC) and cannabidiol (CBD), which is sprayed into the mouth, as analgesic treatment in adult patients with advanced cancer, who experience moderate to severe pain during the highest tolerated dose of strong opioid therapy. In 2005, Health Canada approved Sativex for the treatment of neuropathic pain in adults with multiple sclerosis. Dr. Geoffrey Guy, GW's Chairman, commented: "GW is delighted to receive Health Canada's regulatory approval for Sativex in the relief of
cancer pain. Sativex has been shown to provide important pain relief to the most high need patients with advanced cancer." The efficacy of Sativex has been demonstrated in a placebo controlled parallel group study in patients with cancer pain. The study showed that in patients with advanced cancer who were already taking the strongest available pain treatments, more than four of ten patients taking Sativex were able to achieve a further clinically important reduction in pain.

Switzerland: Following the dismissal of an appeal before the Federal Court André Fuerst, the founder of "Hanf-Info", has to serve a jail sentence of 29 months because he had traded potent cannabis flowers. 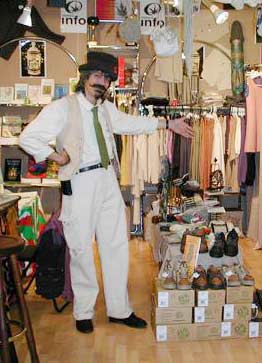 "Tough punishment: André Fuerst has to serve a jail sentence of 29 months because he had traded potent cannabis flowers."