Lebanon: A Comeback for Cannabis!

Lebanon: A Comeback for Cannabis!

Lebanon: It has been a bumper year for marijuana cultivation in the Bekaa Valley, the largest, growers say, since the "golden years" of Lebanon's 1975-1990 civil war, when marijuana and heroin grown and processed here flooded the markets of Europe and the United States. Farmers in Lebanon's Bekaa Valley Are Growing More Marijuana Now That Government Forces Are Once Again Too Busy With Conflicts to Stop Them. Hashish production is illegal in Lebanon, and each year since the early 1990s police backed by troops bulldoze the crops before they can be harvested, leaving farmers penniless. But the failure of United Nations and government programs to encourage the growth of legitimate crops, coupled with months of political crisis, deteriorating economic prospects, and a frail security climate have encouraged farmers to return to large-scale marijuana cultivation. "The worse the security situation is in Lebanon, the more we can
grow," says Ali, a grower in the Bekaa Valley Despite the threat of police raids destroying their crops, farmers say the financial returns justify the risk. This year they were lucky, however. The Army was unable to spare troops to provide
security for the police raids because of the raging battle during the summer growing season against Islamist militants in a Palestinian refugee camp in northern Lebanon. Furthermore, the heavily armed local farmers made it clear to the police that they would resist attempts to wipe out their marijuana crops. "We told the police that for every [marijuana] plant they cut down, we would kill one policeman," says Ibtissam, the wife of a marijuana farmer in the village of Taraya. The northern part of the Bekaa Valley - where the bulk of the marijuana is grown - is dominated by Lebanon's militant Shiite
Hizbullah party. Hizbullah officially disapproves of drug production, but it has chosen to turn a blind eye to the practice rather than risk a confrontation over the issue with its grass-roots supporters. Indeed, Hizbullah in the past has co-opted cross-border drug
smuggling networks between Lebanon and Israel, allowing narcotics to flow south into the Jewish state in exchange for intelligence gathered by Israeli drug dealers. 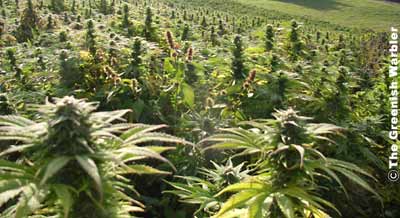 USA/California: Marijuana harvest season a violant one. Recently the third reported violent attack in Nevada County was  reported this harvest season associated with marijuana:  On Sept.  29, two men with guns busted into a home where pot plants were growing on the 11000 block of Tyler Foote Crossing Road.  Alleged intruder John Scott Shelton of Linda was killed in a gunfight with homeowner Dusty Beck, who was shot three times and is recovering, according to his family.  Beck has a history of arrest and conviction for marijuana cultivation, according to police and court records.  Police have not arrested anyone in connection to the shooting. Early Sunday morning, five people with two guns, crowbars and a baseball bat broke into a home on the 20000 block of Woodbury Drive, tied up eight people and beat a majority of them before attempting to take more than 200 marijuana plants.  The intruders were in the process of loading a rented van with the plants when deputies arrived.  The suspects are still at large, investigators said Tuesday. One man was severely beaten in the Sunday attack and reportedly had a broken neck, according to early reports from sheriff's investigators.  The man has been released from the hospital and is walking around with a neck brace on, Nevada County Sheriff's Capt.  Ron Smith said Tuesday.

USA: Marijuana arrests costing students financial aid. Weed, pot, reefer, Mary-Jane, ganja, nugs, beasties, headies and schwag.  No matter what you call it, marijuana arrests are up, and students are in danger of losing their financial aid. In 2006 one marijuana arrest occurred every 38 seconds, amounting to 829,625 arrests within the U.S.  in one year, according to report recently released by the FBI.  Last year's total is the highest in U.S.  history, as the number of arrests has tripled since 1990. Since the beginning of this school year at least 24 people have been arrested for possession of marijuana by campus police. These numbers have more consequences to students than just jail time.  Under a 1998 amendment to the Higher Education Act, which automatically strips financial aid from college students with any drug convictions, 200,000 students have been denied aid, reported a Students for Sensible Drug Policy press release. According to the FBI report, there were more marijuana arrests in 2006 than there were for all other violent crimes combined, including murder, rape, manslaughter, robbery and aggravated assault.  In fact, marijuana arrests comprised 44 percent of all drug arrests in 2006.  Of these violations, 89 percent, or 738,915 people were charged with possession alone. As 18-24 year-olds amounted to 40 percent of all marijuana arrests in 2002, according to the FBI report, this could potentially affect many students.  As a result, many students and organizations from campuses across the country are participating in a week long rally against the financial aid elimination penalty for drug convictions. More than 125 student governments and 3,000 education, addiction recovery, religious and criminal justice organizations are calling on Congress to repeal the amendment, arguing that murders, rapists, arsonists and burglars are allowed to receive aid, while those with drug convictions aren't. The week, sponsored by the Students for Sensible Drug Policy, started on Oct.  15 and will continue through tomorrow.  Activists will be giving out 1,500 postcards for students to sign, which will be hand-delivered to Capitol Hill, asking legislators to repeal the penalty.  As the Education and Labor Committee of the U.S.  House of Representatives is preparing to reauthorize the Higher Education Act, the group hopes to inspire change in legislation. "This student aid elimination penalty is a terrible policy," Tom Angell, director of Students for Sensible Drug Policy, said.  "Blocking access to education and taking people out of school causes more not less drug abuse in our society.  When you prevent someone from earning a college degree it hurts our economy.  Our country needs more education, not less." While there is not a chapter of Students for Sensible Drug Policy at JMU, there are options for students who want to help.  Students can go to schoolsnotprisons.com to write their legislatures on drug policies they find unfair.  Student reaction has been mixed regarding the anti-drug legislation.