Jamaica: Government is considering the legalization of marijuana

Jamaica:  Government  is considering the legalization of
marijuana

Jamaica is considering the legalization of marijuana, a drug revered by members of the island's large Rastafarian population who say smoking it is part of their religion. A seven-member government commission has been researching possible changes to the Caribbean nation's anti-drug laws, which some police complain are clogging courts and jails with marijuana-related cases, a government official said Friday. ''We have discussed it, and we are preparing a report to present to the prime minister,'' said Deputy Prime Minister Kenneth Baugh. In 2003, a government commission recommended legalizing marijuana in small amounts for personal use. But lawmakers never acted, saying legalization might entail loss of their country's U.S. anti-drug
certification. Countries that lose it face economic sanctions. A U.S. State Department report Friday said that Jamaica is the largest producer of marijuana in the Caribbean and a major hub for drugs bound for the United States. Members of the Rastafarian movement, which emerged in Jamaica in the 1930s out of anger over the oppression of blacks, have long lobbied for the legalization of the drug that they say brings them closer to the divine. There are an estimated 700,000 Rastafarians in the world, most of
them among Jamaica's 2.6 million people. 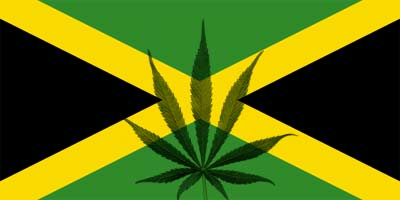 Jamaica:  Government  is considering the legalization of
marijuana

UK: The cannabinoid content of cannabis samples seized by police in England in 2004 and 2005 was investigated. Of the 452 samples indoor-grown unpollinated female cannabis ("sinsemilla") was the most frequent form, followed by resin (hashish) and imported outdoor-grown herbal cannabis (marijuana). The median THC content was 2.1 per cent for marijuana, 3.5 per cent for hashish and 13.9 per cent for sinsemilla.

UK: Police raid cannabis café for a fourth time. Police have raided what is thought to be Britain's most fortified cannabis cafe for a fourth time. Officers took around 15 minutes to gain entry to the building, on a slip road off Freshbrook Road, Lancing, during the raid on Wednesday night. The raid was executed after two people, a man and a woman, were arrested for possession of cannabis after being spotted leaving the
cafe. But the heavy fortifications, which consist of metal poles surrounding the building, two "air lock" style steel doors and a high tech CCTV system, thwarted officers from getting inside the building quickly. A Sussex Police spokesman said: "Officers saw a large plume of smoke emanating from the building on demanding entry and were delayed by some 15 minutes with the occupants failing to open the doors to Sussex
Police. "This building is surrounded by steel poles on which sit tyres full of
concrete, the windows are barred, the doors of which there are two comprising an air lock are constructed from steel with warnings of electrified wire present on the premises. "Officers at the scene reported the smell of cannabis burning in the air while they waited for entry and on entering found a burner situated on the premises having been used prior to entry being gained." No further arrests were made inside the building and no other cannabis was found.

Science: New constituents of cannabis - Researchers of the University of Mississippi found six new molecules in cannabis variety, of whom four were cannabinoids  of the cannabigerol-type. Available online at: http://www.thieme connect.com/ejournals/abstract/plantamedica/doi/10.1055/s-2008-1034311

Netherlands: Echo Pharmaceuticals develops THC tablet Namisol. According to a press release the Dutch company Echo Pharmaceuticals receives several million Euros from a foreign investor to conduct clinical research on their THC tablet Namisol. Partners of Echo Pharmaceuticals are the cannabis grower Bedrocan, as well as Farmalyse and Feyecon. The THC of Namisol is directly extracted from cannabis plants rich in dronabinol with a purity of more than 99 per cent. Farmalyse and Feyecon developed a procedure to produce a dry powder for the production of tablets. The tablets allow a good absorption of dronabinol from the mucous membranes of the mouth. The dronabinol of Marinol of Solvay Pharmaceuticals, which was approved as a medicine in the USA in 1985, is manufactured synthetically. Marinol is available as capsules with 2.5 mg, 5 mg and 10 mg THC, which is solved in sesame oil. The dronabinol of the German companies THC Pharm and Bionorica Ethics is gained by isomerisation of cannabidiol, which was extracted from fibre hemp. It is possible to produce oily solutions (for oral use) and alcoholic solutions (for inhalation with a vaporizer) from it. The dronabinol in Sativex of the British company GW Pharmaceuticals is a component of an alcoholic whole plant extract. Dronabinol and cannabidiol in Sativex are partly absorbed by the mucous membranes of the mouth and partly by the gastrointestinal tract after swallowing of the liquid.

Just a quick footnote to your article, because I feel it is best not to spread misinformation. Rastafarians are actually a minority in Jamaica...very much so. Less than 1% of Jamaicans list their religion as being Rastafarian ( see: http://www.caricomstats.org/Files/Publications/NCR%20Reports/Jamaica.pdf ). However I have seen elsewhere that the population can range from 2-5% (due to people formally identifying with the religion of their birth, but following the tenets of Rastafarianism anyway). My family is Jamaican and includes Catholics, Seven Day Adventists, Jehovah Witnesses and I'm Jewish. Only a few (including my father) are Rastafarians. This does not detract from the fact that the influence of Rastafarianism on the country is huge. Especially since it's only a country of 2 million people. However it is inaccurate to think that when you go to Jamaica, Rastafarians dominate the population. The reality is quite different.

Jamaica does not want to be the last country to the dance. Colorado and Washington state are ahead-making lots of tax dollars for their respective economy. There are many more US states seriously considering legalizing marijuana. Jamaica would see an increase in their tourist industry and tax dollars. The prime ministry and almost all the politicians are not business people so that they do not understand the art of generating revenue for the country. They are more taken up in their egos and personal gains from their position while the public who elected them suffers.