A court in Avezzano, a town in the Abruzzo region, province of L'Aquila, ruled on 2 February that a patient with multiple sclerosis should have free access to a treatment with a cannabis-based medicine produced outside Italy. 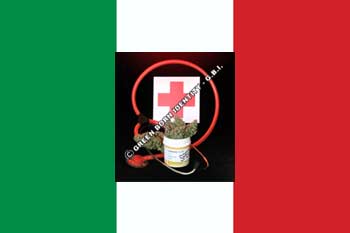 Judge Elisabetta Pierazzi stated that other medicinal drugs had not been effective and that cannabis was the only medicine which reduces the symptoms of the patient. Her ruling was based on article 32 of the constitution, which asserts the right to health of the citizens.

According to a newspaper article it is the first ruling of this kind in Italy. It was noted that the patient had insufficient financial means to purchase the medicine and that there is an urgent need for the patient to receive the drug to avoid a deterioration of his health status. "I'm happy with my victory," the patient was cited. "This is a victory for all sick people forced to renounce the only remedy that can alleviate their suffering based on unreasonable bans that contradict fundamental human and civil rights."


Medical Marijuana: Bryan Epis Returned to Federal Prison, Must Serve Out 10-Year Sentence for Growing Pot for the Sick.

Bryan Epis, the first California medical marijuana provider to be prosecuted and convicted for growing marijuana for patients, was sent back to federal prison Monday by a federal judge in Sacramento.

Epis had served two years of his sentence before he was released in 2004 by an order of the 9th US Circuit Court of Appeals. The now more than 12-year-old case began in 1997, when Epis was arrested for growing at least 100 marijuana plants in the basement of his Chico home. During his trial, Epis testified that he was growing for himself and four other medical marijuana patients, with any excess marijuana going to a medical cannabis buyers' club. But based on business plans Epis had sketched out to expand on his garden and prosecutors' allegations he was only in it for the money, a jury in Sacramento found him guilty in July 2002 of growing more than 100 plants and conspiracy to grow more than 1,000 plants. He received a 10-year mandatory minimum sentence, in part because his house was within 1,000 feet of a local high school.

Epis served two years in federal prison before winning a ruling from the 9th Circuit that he should be freed pending the resolution of the landmark Raich v. Gonzalez case. Unfortunately for Epis, the US Supreme Court ruled in that case that federal drug laws trump state medical marijuana laws. Epis was resentenced to 10 years in 2007, but had been free on $500,000 bail pending appeal. But the 9th Circuit decided against him in August, the US Supreme Court declined to review that ruling, and the end came Monday.


Honolulu: Possession of small amounts of marijuana would be decriminalized under legislation advancing through the state Senate.
The Senate Judiciary Committee passed a measure yesterday capping the penalty for possession of less than an ounce of marijuana at $100. A separate bill that cleared its final Senate committee Monday would permit medical marijuana "compassion centers" to dispense the drug.

Both measures will be scheduled for votes before the full Senate next week, and if passed they would move to the House for further consideration. Hawaii already has a medical marijuana law licensing patients to use the drug, but they're not allowed to buy it. The law allows patients to grow small amounts for personal use.

USA/Science: Report on research at the Californian Center for Medicinal Cannabis Research provides further evidence for the medicinal benefits of cannabis.

The first U.S. clinical trials in more than two decades on the medical benefits of cannabis confirm the drug is effective in reducing muscle spasms associated with multiple sclerosis and pain of different origin, according to a report issued on 17 February.

Dr. Igor Grant, a psychiatrist who directs the Center for Medicinal Cannabis Research at the University of California, San Diego, said five studies funded by the state involved  volunteers who were randomly given real cannabis or placebos to determine if the herb provided relief not seen from traditional medicines. "There is good evidence now that cannabinoids may be either an adjunct or a first-line treatment," Grant said at a news conference where he presented the findings.

In a letter to Dr. Franjo Grotenhermen, Executive Director of the IACM, of 5 February, which reached his lawyer in mid-February, the Public Prosecutor of Hamburg informed him that the preliminary investigation against him was closed. There was no  hint of any criminal activity. With the exception of a police questioning of one ACM member from Hamburg no other member of the ACM or IACM was bothered by the police. "I'm happy that the house search had no legal consequences for patients within the ACM or IACM and that also in the future no member has to worry in this respect," Grotenhermen said.

On 17 March 2009 the local police had performed a house search at the office of the German Association for Cannabis as Medicine  (ACM) and the private office of the chairman of the ACM, Dr. Grotenhermen, and seized files of the ACM and IACM. In addition, a copy of the computer's hard disk was taken. The house search had been carried out based on a warrant from the lower court of Hamburg on an application by the Office of the Public Prosecutor of Hamburg due to the suspicion of a violation of the narcotics law. The inquiry authorities hoped to find suggestions of criminal activities concerning the Cannabis Pharmacy