Israel: Patients may get an approval for the

Israel: Patients may get an approval for the
medical use of cannabis


Israel: Patients may get an approval from the government for the medical use of cannabis. A Tel Aviv medical clinic has quietly begun giving cannabis to cancer and AIDS sufferers, legally and with Health Ministry approval. The clinic began giving the drug to patients about six months ago. By Israeli law, cannabis can legally be used as a medicine if a patient obtains a special approval from the Health Ministry. The cannabis is grown in Israel. The drug is approved usually only for patients with cancer,
AIDS or chronic inflammation of the intestine. The clinic, which the Health Ministry has refused to identify publicly, gives out the drug in small, controlled quantities when a patient presents his license. A spokesman for the Israel Cancer Association said the drug could reduce side-effects for some patients undergoing chemotherapy or other treatments, and the organization would consider adding information about this to its website.

USA/ San Luis: Last Thursday, San Luis port of entry had its highest single marijuana seizure - at 3,043 pounds - a U.S. Customs and Border Protection spokesman said in a Friday news release. The 1 1/2 tons of marijuana were seized from an apparently empty commercial tractor trailer after officers noted the driver acting suspicious during routine questioning, Officer Brian Levin said. Once drug dog Ben picked up the odor of marijuana in the trailer, officers used the X-ray system to find a hidden compartment stuffed with 182 bundles with a street value of $5 million, Levin said. The driver, a 45-year-old U.S. citizen whom Levin did not name, was turned over to Immigrations and Customs Enforcement while the drugs, his truck and trailer were seized, Levin said.

Canada: Marc Emery, Vancouver's self-styled Prince of Pot, has tentatively agreed to a five-year prison term in a plea bargain over U.S. money laundering and marijuana seed-selling charges. Facing an extradition hearing Jan. 21 and the all-but-certain prospect of delivery to American authorities, Emery has cut a deal with U.S. prosecutors to serve his sentence in Canada. He also hopes it will save his two co-accused - Michelle Rainey and Greg Williams, who were his lieutenants for so much of the past decade. The three were arrested in August 2005 at the request of the United States and charged even though none had ventured south of the border. Since then, they have been awaiting the extradition hearing. With the proceedings about to begin, Emery says his lawyer brokered the best deal possible. If accepted by the courts in both countries, Emery said he will serve the full term and not be eligible for Canada's lenient get-out-of-jail-early rules. "I'm going to do more time than many violent, repeat offenders," he complained. "There isn't a single victim in my case, no one who can stand up and say, 'I was hurt by Marc Emery.' No one." 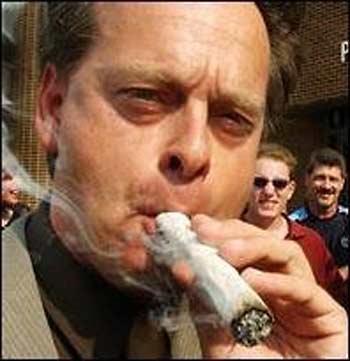 USA: Medical marijuana dispensaries in California, including the two that currently operate in Mendocino County, may soon be exempt from state sales tax, said a representative from the California State Board of Equalization. The regulations will soon reflect the change that when marijuana is prescribed by a physician it is determined to be a medicine, said Sarah, the representative, who refused to reveal her surname. In order to be exempt from sales tax, the business must conform to Regulation 1591, which states in part that the item must qualify as a medicine, said the representative. "Regulation 1591 defines a medicine, in part, as any substance or preparation intended for use by external or internal application to the human body in the diagnosis, cure, mitigation, treatment, or prevention of disease and which is commonly recognized as a substance or preparation intended for that use," stated a special notice released by the board titled "Information on Sales Tax and Registration for Medical Marijuana Sellers." The change will be a reversal from the board's previous position.