India's Maoist insurgents, also known as Naxalites, are partially funding their long-running rebellion with profits from illicit opium poppy and cannabis crops, according to a new report from the Institute for Conflict Management. The groups also fund themselves through taxation of major corporations, farmers, and small businesses in areas they control. Known officially as the Communist Party of India-Maoist, the Naxalites emerged in 1967 after splitting from the Communist Party of India-Marxist, and have been engaged in an on-again, off-again rebellion against the Indian state ever since. 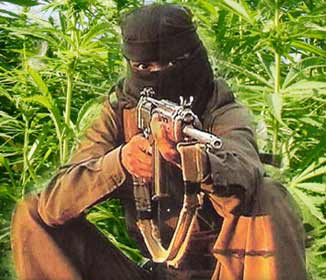 Originally centered in West Bengal, the Naxalites now operate in 20 of India's 28 states in districts comprising about 40% of the national territory. They are especially strong in rural eastern India, where they control 92,000 square kilometers in the so-called "Red Corridor" running through Chhattisgarh and Andra Pradesh states. While India is one of a handful of countries licensed to produce opium for the legal medical market, it is also the home of substantial illicit poppy cultivation and, according to the report, the Naxalites are profiting from unlicensed opium fields in Jharkhand and Bihar states. Indian authorities report they destroyed opium crops worth $270 million on the black market in 2007. What is unknown is how much was harvested, with the profits ending up in Naxalite war chests. The Maoists are also making money off cannabis. According to the 2008 Mohanty Commission of Inquiry, the CPI-Maoist and its front groups were behind extensive cannabis cultivation in Orissa state. One group, People's War, which later merged with the CPI-Maoist, was allegedly in charge of between 7,500 and 10,000 acres sown with cannabis.

USA: A little known Illinois law on the medical use of cannabis

A Chicago journal reported of the status of the laws on the medical use of cannabis in Illinois. Cannabis can be used for medicinal purposes under the laws of 14 US states (Alaska,  California, Colorado, Hawaii, Maine, Maryland, Michigan, Montana, Nevada, New Jersey, New Mexico, Oregon, Rhode Island, Vermont, and Washington).

"Here's a little known fact: technically it's legal in Illinois too - and has been for 32 years." In  1978 the Illinois legislature passed a law (Cannabis Control Act) to try to bring common sense to the state's drug laws.  In the name of "research," the act gave the Illinois Department of Human Services permission to "authorize" physicians to use  cannabis to treat "glaucoma, the side effects of chemotherapy or radiation therapy in cancer patients or such other procedure certified to be medically necessary." But there were two obstacles.

The first was that Human Services was merely allowed to give doctors this authority - not required to. The second was that it could act only "with the written approval of the Department of State Police." In other words, two state departments had to create new policies before medical cannabis could actually be prescribed and provided. To this day neither has.

USA: Washington - More medical professionals will be allowed to authorize the medicinal use of cannabis for patients in the state of Washington.
Governor Chris Gregoire signed a bill on 1 April, which takes effect on 10 June. It adds naturopaths, certain nurses and others to the list of those who can officially recommend cannabis for patients. As in the other states that allow the medical use of cannabis, under previous law, only physicians were allowed to write the recommendation.

Two more members of the British government's Advisory Council on the Misuse of Drugs (ACMD) have resigned in the last week, citing the Labor government's emphasis on politics over evidence-based policy making. That brings to seven the number of ACMD members who have resigned since former ACMD head Professor David Nutt was sacked last fall. Home Minister Alan Johnson fired Nutt after Nutt repeatedly criticized the government's decision to ignore the ACMD's advice and reschedule marijuana as a more dangerous drug.

Johnson also took umbrage at Nutt's assertion that taking ecstasy was less dangerous than horse riding. Nutt's firing provoked the immediate resignation of two other members of the committee, Dr. Les King and Marion Walker, followed a week later by three more: Dr. Simon Campbell, Dr. Ian Ragan and Dr. John Marsden. A seventh member, Dr. Polly Taylor, the veterinary specialist on the panel, resigned two weeks ago, ahead of the council's crucial meeting on mephedrone last week, in protest of new guidelines that said scientific advisors could be fired if they "undermined" the government.


Canada: The Clock is Ticking on Canadian "Prince of Pot" Marc Emery's Extradition

Canadian "Prince of Pot" Marc Emery's battle to avoid being extradited to the US to serve a five-year federal prison sentence for selling pot seeds over the Internet continues as the clock ticks down toward May 10 -- the date by which Canadian Justice Minister Rob Nicholson is to decide whether to okay his extradition or not.

Emery and his supporters are fighting to the bitter end, and they're picking up some significant support along the way. Last month, members of all three major English speaking political parties, including the ruling Conservatives, handed in 12,000 signatures on petitions to parliament demanding he not be extradited and addressed the House of Commons on the issue. Shortly thereafter, the French speaking Bloc Quebecois announced it, too, was joining the cause of keeping Emery in Canada.

Science: Sports - Scientists at the University of Heidelberg, Germany, investigated  the importance of the endocannabinoid system for the well-being during physical activity.

They concluded that "while endocannabinoids seem to contribute to the motivational aspects of voluntary running in rodents, influencing the total distance covered most likely via CB1 receptors, they are less involved in the long-term changes of emotional behavior induced by voluntary exercise."