India: Cannabis cultivation continues to flourish on a massive scale at Chendipada and its adjoining areas in the district despite destruction of plantations each year by the excise authorities. The reason is that the kingpin behind the racket has remained elusive so far. The authorities ended their drive after destroying the plantations and registering cases against some of the local villagers in this connection. What is appalling is that authorities despite conduct raids in each year are yet to establish the identity of the main culprits though they admit their existence. The excise authorities conducted raids for a stretch of 17 days in seven phases in December and January in some places under the
Chhendipada police station area. The operation, said to be the largest so far, covered an area of about 1.5 lakh acres. The officials who conducted the raid burnt about 4.5 lakh cannabis trees raised on government and forest lands in the peripheral villages like Patrapara, Patakmunda, Raipal, Pururanagarh, Marudhipa and Kanalaoi of Chhendipada. The district excise superintendent, Mr Biswajit Dash, who conducted
the raids named Kalia Dehury as the main agent behind the cultivation of cannabis in these areas. Cases had been registered against three persons, including kalia, They are all absconding. The cultivation is not only limited to chhendipada area, but have spread to Kishorenagar area of the district and beyond the adjoining borders of Sambalpur and Deogarh district. The local villagers of this belt have been allured by the agents and have given away their lands for cannabis plantations. One of the villagers of Raipal was offered Rs 8,000 to let out his half acres of land for four months. 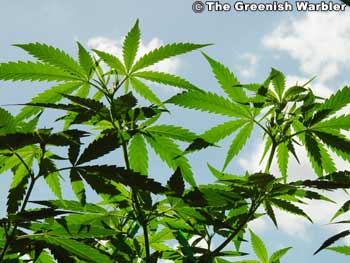 The Netherlands: Cannabis pill on horizon. Drug company Echo Pharmaceuticals expects to sell the world's first cannabis pill within five years, targeting a
$5.85-billion global market, its chief executive said. The privately held Dutch company faces competition from Canada's Cannasat, which is also developing a pill. In 2005, Canada became the first country in the world to approve a cannabis-based spray produced by Britain's GW Pharmaceuticals Plc as a treatment for multiple
sclerosis patients. U.S. regulators granted approval for a clinical trial for GW's under-the-tongue spray called Sativex, but the company said in July that European regulators had requested a further clinical study before approval. Echo said it will start clinical studies and trials of its pill, to be marketed as Namisol, in the first half of 2008. "The global cannabis-based drugs market could be worth ($6 billion)," Echo Pharmaceuticals chief executive Geert Woerlee told Reuters in an interview Wednesday. "As an early adopter, we could get 20 to 30 per cent market share." He said studies showed that cannabis-based drugs may be effective for afflictions such as Parkinson's, MS and migraine and could also help patients with Alzheimer's. The Netherlands has tolerated the sale of cannabis in coffee shops for decades and in 2003 became the world's first country to make it available as a prescription drug in pharmacies to treat chronic pain, nausea and loss of appetite in cancer, HIV and multiple sclerosis patients.

Science: Marijuana Withdrawal As Bad As Withdrawal From Cigarettes.  Research by a group of scientists studying the effects of heavy marijuana use suggests that withdrawal from the use of marijuana is similar to what is experienced by people when they quit smoking cigarettes. Abstinence from each of these drugs appears to cause several common symptoms, such as irritability, anger and trouble sleeping - based on self reporting in a recent study of 12 heavy users of both marijuana and cigarettes. "These results indicate that some marijuana users experience withdrawal effects when they try to quit, and that these effects should be considered by clinicians treating people with problems related to heavy marijuana use," says lead investigator in the study, Ryan Vandrey, Ph.D., of the Department of Psychiatry at the Johns Hopkins University School of Medicine.

Science: New German study shows marijuana may fight cancer. Hamburg - cancers, according to new research in Germany. Cannabinoids, the active components in marijuana, are already used medically to reduce the side effects of cancer treatment, such as pain, weight loss and vomiting. But the new study, published in the latest issue of the Journal of the National Cancer Institute, finds that the compounds may also have an anti-cancer effect. However, more research is needed to determine whether the laboratory results would hold true in humans, the authors wrote. Dr Robert Ramer and Dr Burkhard Hinz of the University of Rostock in Germany investigated whether and by what mechanism cannabinoids inhibit tumour cell invasion. Cannabinoids did suppress tumour cell invasion and stimulated the expression of TIMP-1, an inhibitor of a group of enzymes that are involved in tumour cell invasion. "To our knowledge, this is the first report of TIMP-1-dependent anti-invasive effects of cannabinoids," the two researchers said in a joint statement. "This signalling pathway may play an important role in the anti-metastatic action of cannabinoids, whose potential therapeutic benefit in the treatment of highly invasive cancers should be addressed in clinical trials," the authors said.

I want to go little deep on the first comment that, its not legal in India but people can access it easily everywhere. If you move to the north Himalayas range, you can see the abundant amount of marijuana grown just like that. Though you can't posses it, because it is illegal. Its a matter of getting caught by the police or not. keep in touch with us in Marijuana community at www.weedlynx.com

Cannabis has been used for Religious and Medical purposes for 1000's of years in India and will continue to be for thousands more. It is simply stupity on the governments part that continues to persecute the Holy Herb. ll HAR HAR MAHADEV ll

The plant should be free in India. India is the best place to grow weed and it will really help the country. Maybe its just because india's connection to the United Nation thats they are making it illegal even they can see that legalization is one of the key to improve the living of the people. They even have their own Indian Marijuana Community Forum ( www.HIGHisCOOL.in )