In memoriam: Tod Hiro Mikuriya. The pioneering American researcher on marijuana and cannabis therapeutics died at 73. He was a prominent psychiatrist and advocate for the legal use of marijuana for medical purposes. After earning his medical degree at Temple University he completed a psychiatric residency at San Francisco's Southern Pacific General Hospital. This was followed by service in the US Army Medical Corps and at state hospitals in California and Oregon. He was Director of the Drug Addiction Treatment Center of the New Jersey NeuroPschiatric Institute. In the 1960's he directed marijuana research for the National Institute of Mental Health's Center for Narcotics and Drug Abuse Studies (predecessor of today's National Institute on Drug Abuse) but when the research failed to support the government's view of marijuana as a dangerous drug, he believed the evidence instead of
the politicians. That ended his career with the federal government. In the subsequent years, he practiced psychiatry in California. Following passage of the California Compassionate Use Act (Proposition 215) in 1996, Dr. Mikuriya served as Medical Coordinator of the Oakland Cannabis Buyers' Cooperative, the Hayward Hempery, and the San Francisco Cannabis Buyers' Club - organizations established to provide
access to medical marijuana for patients. In 2000 he founded the California Cannabis Research Medical Group http://www.ccrmg.org/, a non-profit organization "dedicated to conducting quality medical marijuana research, to ensuring the safety and confidentiality of all research subjects, and to maintaining the highest quality of standards and risk management". He described the roots of his activism in the ironic statement that, "I had the good fortune to have a Japanese father and a German mother in a small Pennsylvania town during the Depression and World War II,"
As a consequence of this background, "my sister and I were chased, shot at, beaten up, spat upon, called names. The local kids chased us like a pack of dogs. I realized that people could be brainwashed and trained to hate. The same thing has been done with marijuana and marijuana users. I've learned to fight back." He fought the good fight against bad laws and their abusive enforcement for many years and at high personal cost. His passing will be mourned by the many he helped and by those who seek to see drug policy based on realities instead of propoaganda. A collection of some of his writings on drug policy can be found online at the Schaffer Library of Drug Policy. 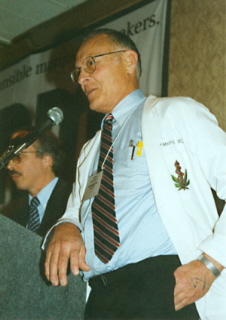 "The cannabis community has lost one of its best advocates and most impressive characters: Tod  Mikuriya died at the age of 73."

The Netherlands: Almost half of Rotterdam's coffee shops will be forced to stop selling cannabis because they are too close to secondary schools. The move comes as part of a tougher Dutch line on the drug, which is legally banned in the country but tolerated for use in small amounts if it is bought in coffee shops. The coffee shops are a major attraction to the many young tourists that visit the Netherlands every year, but they are becoming increasingly regulated. Some are now no longer allowed to serve alcohol, and if one shuts down it cannot be replaced by another. Due to the growing use of soft drugs among school pupils and problems caused by their sale and consumption, Rotterdam has decided to ban 27 shops within a 200 metre radius of secondary schools from selling cannabis, starting in 2009. The new laws will not cover primary schools, as primary school children hardly ever consume cannabis, it said.

USA: Ed Rosenthal re-convicted. A federal jury in San Francisco convicted Oakland "Guru of Ganja" Ed  Rosenthal on Wednesday of three of the five marijuana-growing
felonies of which he stood accused. After starting deliberations, jurors convicted
Rosenthal, 62, of one conspiracy count; one count of growing,  intending to distribute and distributing marijuana; and one count of  using a commercial building - 1419 Mandela Parkway in Oakland - as  a site for growing and distributing marijuana. But they acquitted him of growing and distributing marijuana at the Harm Reduction Center medical-marijuana club on San Francisco's Sixth  Street, and they deadlocked on whether he had conspired to do so. U.S. District Judge Charles Breyer - who presided over Rosenthal's  first trial in 2003, and has made it clear that he believes Rosenthal shouldn't have been retried - told Assistant U.S. Attorney George Bevan to call whichever superiors he needed for approval to have that
final count dropped, as he wouldn't brook yet another retrial in his  courtroom. The charge was dropped within about an hour. So, more than six years after federal agents raided the Mandela Parkway warehouse, the Harm Reduction Center, Rosenthal's home and other sites, seizing thousands of marijuana plants, Rosenthal now faces - no prison time, no fine and no probation at all! That's because Bevan and Breyer agreed months ago that Rosenthal couldn't be sentenced now to anything beyond the one day of time - already served - to which he was sentenced for his 2003 convictions in the same case, overturned last year by the 9th U.S. Circuit Court
of Appeals due to juror misconduct. Rosenthal is scheduled to be  "sentenced" next Wednesday, but he'll walk free.

Canada: Prime Minister Harper to unveil US-style war on drugs. The Harper government's new anti-drug strategy is expected to take a tough approach to illicit drugs: cracking down on grow-ops and pushers, and retreating from "harm reduction" measures such a safe injection sites for addicts. The new strategy, slated to be announced next week, is also understood to include more money for treatment and a national drug-use prevention campaign. The federal budget last March offered a glimpse of the strategy by allocating an additional $64 million over two years for enforcement, treatment, and prevention. But the budget figures did not mention
harm-reduction measures, which aim to limit the spread of infectious diseases through substance abuse. Joanne Csete, the network's executive director, recently wrote in a letter to parliamentarians that the Conservatives are contemplating
"a U.S.-style war on drugs, an approach that has proven time and time again to be counter-productive and a tragic waste of public funds." Of the new money allocated in the federal budget, $22 million would go to law enforcement efforts to crack down on marijuana grow operations and to catch and convict drug dealers. Canada is currently operating under a 20-year-old national drug strategy that has been criticized for a lack of direction, targets and measurable results. The government spends $385 million a year under the strategy, most of it on law enforcement measures such as
police investigations, prosecutions and border controls. The drug strategy is expected to be accompanied sometime soon by proposed legislation to impose minimum mandatory prison terms for serious drug crimes, a Conservative election promise that has been delayed for more than a year.

Canada: High priest of pot challenges Canada`s drug laws. The self-proclaimed high priest of pot will be back in  court next month looking to strike down Canada's  marijuana laws. Hornby Island resident Rev. Don Hogan will be at the Courtenay courthouse June 11 to 13 putting forth a  legal constitutional challenge to the legality of the  Controlled Drugs and Substance Act. This is not the first time Montreal-born Hogan has  challenged the courts following an arrest for  possession of marijuana. "At the same time it is also my intention to challenge  the validity of Health Canada's application process for  access to medical marijuana," said 56-year-old Hogan. "Like millions of other members of Canada's cannabis  culture, I most certainly want nothing except  self-respect and freedom from Canada's draconian marijuana prohibition." Hogan was arrested in April 2005 and about two ounces of medical
cannabis was seized by police. He was not  charged until months later. Hogan contends that marijuana prohibition and the laws  governing it constitutes more harm to society than  medical or non-medical and recreational use of pot  does.