Holland: New cannabis-friendly party about to form up

“Groen Vrij!” (Green Free!) is the name of a new party in the Netherlands that advocates marijuana and legal cultivation at least for one`s own supply. This party, founded by Wernard Bruining, uses the internet as main medium, thus calling itself also “Internet Party”, as “almost 80% of the Dutch people are having a computer and internet access”. Now the party`s official programme has been published, look at www.groenvrij.nl for details. Groen Vrij! intends to take already part in the Dutch parliament election taking place on 22 November. For this purpose, it is crucial to have at least 30 accessions per province, and this is not yet the case everywhere, so quick engagement is much asked for! 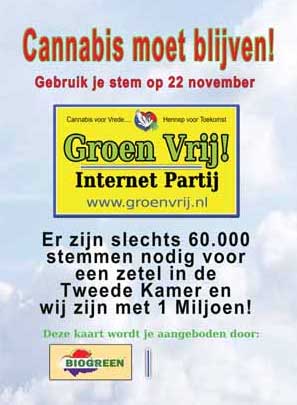 Groen Vrij! - the Dutch now have the chance to vote for marijuana freedom.

USA: Opinion says no state has the power to allow citizens to violate federal law.
Riverside County District Attorney Grover Trask released an opinion on the legality of medical marijuana usage in the county. The opinion, called a "white paper," addresses issues raised by the existence of medical marijuana dispensaries and their disbursement of the drug to those with medical problems. The "white paper" concludes that California's Compassionate Use Act of 1996, which legalized the use of medical marijuana for California residents, is illegal under existing federal law. Federal law considers all uses of marijuana illegal. "No state has the power to grant its citizens the right to violate federal law," the paper states. In addition, the opinion classifies "store-front medical marijuana businesses ... (as) prey for criminals and create(s) easily identifiable victims," it states.

New Orleans: Country singer-songwriter Willie Nelson and several fellow musicians were charged with misdemeanor drug possession by Louisiana police after a search of their tour bus on Monday turned up marijuana and psychedelic mushrooms. State police spokesman Willie Williams said the bus was stopped early on Monday morning about 7 miles east of Lafayette, Louisiana, for a routine commercial inspection, and a state trooper smelled marijuana inside the bus. State Police seized about 1-1/2 pounds (0.7 kg) of marijuana and two-tenths of a pound (91 grams) of mushrooms from the bus, Williams said. Nelson and four other passengers on the bus were cited for possession and released, while the driver had his commercial driving privileges suspended in addition to being cited for possession. Nelson faces possible jail time of up to six months and an unspecified fine, police said. "There was no trouble whatsoever," Williams said. "They were all cooperative." A spokesman for Nelson said she had no information about the arrest. Nelson, 73, has been an advocate for the legalization of marijuana. He became famous in the 1970s as part of the outlaw country movement that included influences from rock, jazz and folk music. It is not the first time Nelson was caught possessing marijuana.

Vancouver: After negotiating a plea agreement of simple possession of marijuana
with U.S. prosecutors, Renee Boje dropped her extradition appeal in B.C. and returned to California from B.C. last month. She had faced a prison term of 10 years to life in connection with a medical marijuana grow operation. Her lawyer, John Conroy, said instead of that sentence a U.S. judge gave Boje one year's probation without supervision if she remains in Canada. The judge ordered that if she goes back to the U.S. for more than 72 hours during that one-year probation period she would have to report to a supervisor. "It's a good resolution," Conroy said. "She wanted to go through the immigration process (in Canada) and these appeals had to be abandoned." The appeal of a decision ordering Boje back to California was officially dropped last week in the B.C. Court of Appeal.