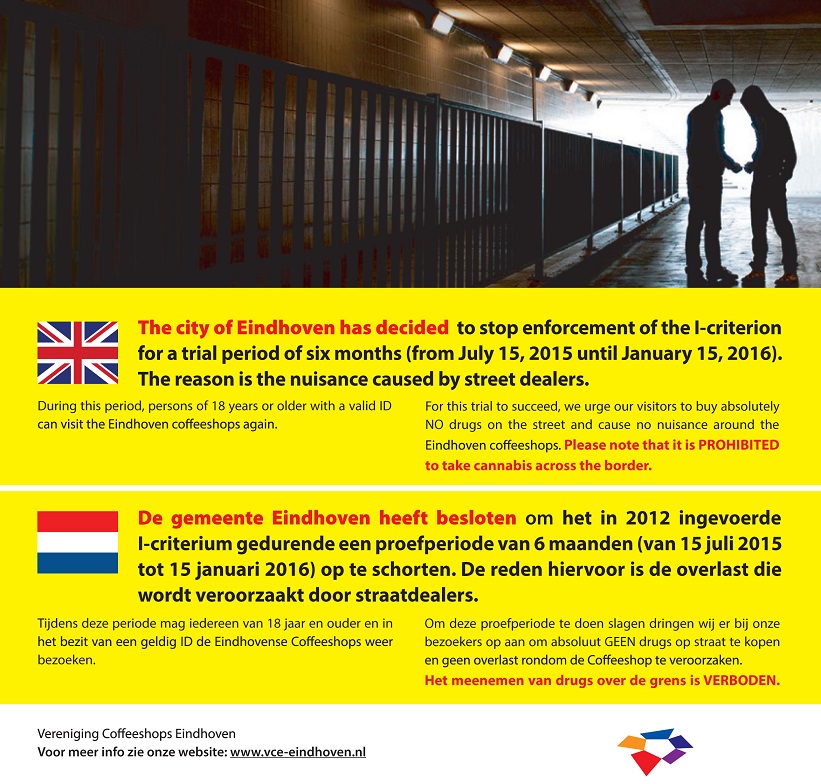 Although coffeeshops in Amsterdam never stopped tourists using them, many other cities demanded that coffeeshops sold cannabis only to Dutch citizens.  Those rules are now starting to crumble, and in order to drive ‘street dealers’ back out of business some cities are allowing tourists back in the coffeeshops.

Eindhoven has ruled that banning foreigners from coffeeshops has benefitted only the street dealers.  The coffeeshops originally drove street dealers out of business when they were first introduced many years ago.  But since the coffeeshops were recently closed to foreigners the dealers have re-emerged with a 24/7 tax-free business.  In an effort to stop this Eindhoven is starting a new 6-month trial system of re-opening coffeeshops to everyone.  After the 6-month trial is complete it it widely accepted that Eindhoven will make the change permanent.  The only real question after that will be when the remaining cities re-open their coffeeshop doors to foreigners.
Eindhovens decision means that just a handful of cities actively prevent non-Dutch citizens from buying cannabis in coffeeshops, namely Maastricht, Tilburg, Breda, Helmond, Goes, Terneuzen and Vlissengen.  Following the work done by Eindhoven to re-open the coffeeshops to foreigners (and get the dealers back off the streets) it looks like just a matter of time before all the Dutch coffeeshops reopen their doors to tourists again.
More news on the story is here https://translate.google.co.uk/translate?sl=nl&tl=en&js=y&prev=_t&hl=en&ie=UTF-8&u=http%3A%2F%2Fwww.voc-nederland.org%2F2015%2F07%2Fcoffeeshops-eindhoven-vanaf-vandaag-discriminatie-vrij%2F&edit-text=