Greece -  Three Greek police officers taking part in a raid on a hashish plantation were ambushed and shot by suspected growers armed with AK-47s Sunday night, leaving one officer in critical condition with a head wound.
The attack took place in the village of Malades on the Greek island of Crete, about nine miles from Heraklion, the island's largest city. Sunday's shooting is the second serious attack by hash growers against police on the island in seven months. Last November, three police officers were shot and wounded when their convoy was headed to the village of Zoniana, just west of Heraklion. The Greek government responded with a massive police sweep and house-to-house searches. Police arrested 16 people in connection with the ambush and a series of bank robberies, but recovered few of the heavy weapons believed to have been used in that assault. 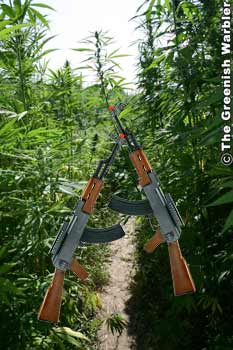 Crete has a longstanding tradition of gun-ownership, and weapons remain readily available despite police efforts to crack down. Marijuana growing is rife in remote mountain villages on the island. Marijuana growers and dealers routinely take pot-shots at police helicopters or vehicles patrolling their area, prompting the Greek media to refer to the region as a "Greek Colombia" and a "state within a state," according to Agence France-Presse. Local officials in Crete are often accused of protecting growers and traffickers, the agency noted.

Belgium  -  On Thursday, June 26th, 2008, the Belgian Cannabis Social Club Trekt Uw Plant and 5 of its members have been acquitted for the establishment of a cannabis plantation. Review: During the courtcase for the local court of Antwerp, on 27 March 2008, District Attorney Lins had demanded max. 80 hours of community work for the members of Trekt Uw Plant, as well as the dissolution of the club, which he considered to be a criminal organisation.

The Antwerp court finally judged that Trekt Uw Plant is not a criminal organisation, and condemned the members for nothing else than the possession of cannabis. On June 12th 2008, during the court case for the court of appeal, the District Attorney announced, in an unexpected move that surprised everyone who followed the case, that he would drop the charges against Trekt Uw Plant because the possession of cannabis is not a crime but an offense, and too much time has passed since the offense was committed. This sentence has been provoked by the District Attorney himself, when during the first session of the court of appeal on January 24th 2008, when there was still time to condemn the offense, he asked for a delay of 5 months to deal with the case. It has been a trick of the District Attorney in order to cover up his defeat in this case. The charges have been dropped but a debate on the core question - can cultivating cannabis for personal use be prosecuted or not - has been avoided. This sentence implies an acquaintance.

The District Attorney stops the prosecution it has started against us. This is a political message that the ministerial cannabis guideline of 2005, according to which the possession of max. 3 grams and 1 cannabis plant for personal use is not prosecuted, is still valid and can be applied. From this sentence, we conclude that the actions of Trekt Uw Plant fit completely within the ministerial guideline and these actions can be permitted in the future.

USA  -  The raids, focused mainly in Southern Humboldt, also brought agents to Arcata, where one house was reportedly raided. In Southern Humboldt, residents woke up to tales of convoys of federal agents driving through the southern part of the county, while residents elsewhere heard the news through online media and radio reports. Federal agents from a variety of law enforcement agencies, including the Federal Bureau of Investigation, Drug Enforcement Agency and Bureau of Narcotic Enforcement, joined in the large-scale drug bust dubbed "Operation Southern Sweep."

Federal agencies brought almost three times the number of agents -- about 450 -- as the number of law enforcement    officers in the county's seven incorporated cities and the Humboldt County Sheriff's Office, which total 158. Officials rigged a base of operations at the River Lodge in Fortuna, with several large trucks carrying communications equipment parked outside. FBI Special Agent Joseph M. Schadler said that agents will be in  Humboldt County over the next few days to finish raids on 23 discrete  locations and two large chunks of property.

Agents executed 27 federal warrants and two state warrants at these  locations, he said. Agents served four of the 29 warrants at two large chunks of property. The massive raids were a result of a two-year investigation by the  California Department of Justice's Bureau of Narcotic Enforcement,  connecting one group's large-scale commercial marijuana grow and  distribution operation, Schadler said. "They are not Mexican drug traffickers," he said. "They are homegrown." Agents are not targeting medical marijuana users or growers with 215 cards, Schadler said.

Report on cannabis in Europe shows use by 1 in 5 adults.

Europe  -  One in five adults in Europe have used marijuana or related drugs like hashish, the European Union's drug agency said. In a 700-page report on the use and abuse of cannabis, the European Monitoring Center for Drugs and Drug Addiction, based in Lisbon, estimated that more than 13 million Europeans had used it in the past month.

The report aims to be an authoritative reference on scientific research, legislation and policy issues associated with the drug in Europe. It highlights legal disparities among member countries: Portugal, for example, decriminalized cannabis use in 2000, while Denmark and Italy toughened their laws. The report also found a wide range of prices for a gram of cannabis, from 1.4 Euros in Spain ($2.19) to 21.5 Euros ($33.68) in Norway.