Germany: One week ago, German police unleashed a massive crackdown on marijuana growers, raiding more than 200 gardens in an effort that involved police forces from 16 regional states and some 1,500 police investigators. There is no word yet on the number of arrests. According to the Times of London, the trigger for the raids was the increasing popularity of the grow shop “Catweazel” that has been selling equipment over the Internet. The paper reported that at least some of the raids were based on information drawn from the shops' customer lists. But also arousing the concern of German authorities was what they described as increasing interest among Dutch marijuana traders in growing outside the Netherlands, where the conservative national government has been trying to move the country away from its decades-long policy of pragmatic tolerance of the herb. "In the old days, hash farmers were almost always on the Dutch side of the border, but since the Netherlands got tougher we have been saddled with the problem," Ulrich Schulze of the Essen Customs and excise authority told the paper. Although marijuana remains illegal in Germany, German police typically treat it with some tolerance, although that varies from state to state. German police are generally stretched to thin to control marijuana grows, Schulze said, but they could resort to using helicopters to look for outdoor grows. But most German grows are indoors. 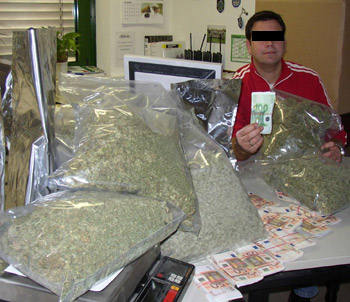 USA: San Francisco - Employers can fire workers found to have used medical marijuana even if it was legally recommended, the California Supreme Court ruled Thursday in another setback for California in its increasingly rancorous clash with federal law over medical pot use. The high court upheld a Sacramento telecommunications company's
firing of a man who flunked a company-ordered drug test. Gary Ross held a medical marijuana card authorizing him to legally use marijuana to treat a back injury sustained while serving in the Air Force. The company, Ragingwire Inc., successfully argued it rightfully fire Ross because all marijuana use is illegal under federal law, which does not recognize the medical marijuana laws in California and 11 other states. "No state law could completely legalize marijuana for medical purposes because the drug remains illegal under federal law," Justice Kathryn Werdegar wrote for the 5-2 majority. The court also said the so-called Compassionate Use Act passed by California voters in 1996 had nothing to do with employment laws. "Under California law, an employer may require preemployment drug tests and take illegal drug use into consideration in making
employment decisions," Werdegar wrote. A 2005 U.S. Supreme Court decision declared that state medicinal marijuana laws don't protect users from prosecution. The Drug Enforcement Agency and other federal agencies have been actively shutting down major medical marijuana dispensaries throughout the state over the last two years and charging their operators with serious felony distributions charges. Ragingwire said it fired Ross because, among other reasons, it feared it could be the target of a federal raid. The Santa Clara Valley Transportation Authority and the Western Electrical Contractors Association Inc. had joined Ragingwire's case arguing that companies could lose federal contracts and grants if they allowed employees to smoke pot.

Science: Research by a  group of scientists studying the effects of heavy  marijuana use suggests that withdrawal from the  use of marijuana is similar to what is  experienced by people when they quit smoking cigarettes. Abstinence from each of these drugs  appears to cause several common symptoms, such as  irritability, anger and trouble sleeping - based  on self reporting in a recent study of 12 heavy  users of both marijuana and cigarettes. "These results indicate that some marijuana users  experience withdrawal effects when they try to  quit, and that these effects should be considered
by clinicians treating people with problems  related to heavy marijuana use," says lead  investigator in the study, Ryan Vandrey, Ph.D., of the Department of Psychiatry at the Johns  Hopkins University School of Medicine.

Science: Diabetes - In a press release GW Pharmaceuticals reported that it has
generated highly promising results in both pre-clinical pharmacology studies and a Phase I trial of a new potential cannabinoid treatment for type 2 diabetes and related metabolic disorders. The natural cannabinoid delta-9-tetrahydrocannabivarin (THCV), which in earlier studies was shown to behave as an antagonist at the CB1 receptor, had
positive effects on hormones such as insulin in animal models of diabetes and was well tolerated by healthy humans. The company announced to start a Phase II trial in type 2 diabetes patients already in 2008.

Science: Glaucoma Scientists from Virginia, USA, demonstrated that topical administration of the synthetic cannabinoid WIN55,212-2 to the eyes of rats alleviated intraocular hypertension in these animals. This effect was mainly mediated by the CB1 receptor. No systemic effects on circulation were observed.