Germany: New government of North Rhine Westphalia will increase the tolerated quantity of marijuana for personal use to 10 grams

The new ruling coalition of Social Democrats and The Green Party in North Rhine Westphalia has announced to revise the prosecution guidelines for drug possession and will raise the tolerated quantity of marijuana for personal use from up to now 6 to 10 grams. 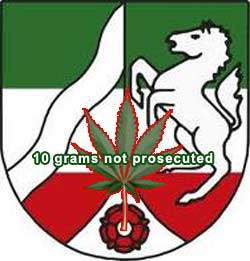 Germany: New government of North Rhine Westphalia will increase the tolerated quantity of marijuana for personal use to 10 grams.

Also, the coalition wants to focuse more on prevention than prosecution.

Rasmussen Poll: Fewer Than One In Five Americans Say Marijuana Is More Dangerous Than Booze

Marijuana prohibition's days are numbered. Only 17% of those polled said that marijuana is the more dangerous than alcohol.

A majority of respondents (65 percent) said that they believed that marijuana would be legal in the United States within ten years.

It's August in California, and that means the state's multi-billion outdoor marijuana crop is ripening in the fields. It also means that the nearly 30-year-old effort to uproot those plants, the Campaign Against Marijuana Planting (CAMP), is once taking up its Sisyphean task of wiping out the crop.

The choppers are flying, the SWAT teams are deploying, and the federal funds that largely feed CAMP are being burned through. The raids are nearly a daily event in the Golden State at this time of year. CAMP spokesperson Michelle Gregory told the Chronicle Wednesday that the campaign had uprooted 2.27 million pot plants as of this week, slightly behind the 2.4 million uprooted by this time last year. Last year was a CAMP record, with 4.4 million plants seized by year's end. "It's about the same this year," said Gregory.

A poll conducted last week suggests that despite a brutal recession and a now chronic state budget crisis, Nevada residents still aren't quite ready to legalize and tax marijuana. The poll comes as the Marijuana Policy Project and its local affiliate, Nevadans for Sensible Marijuana Laws, are in the midst of a signature-gathering campaign to put a pot legalization initiative on the November 2012 ballot.

A Las Vegas Review-Journal and 8NewsNow poll found that 52% of likely voters opposed legalizing and taxing marijuana, while only 42% supported it. Legalization found majority support only among Democrats (53%) and independents (51%), while 69% of Republicans opposed it. Among men, only 45% supported legalization, with that figure dropping to 39% among women.

The overall support level is similar to that achieved with legalization initiatives that went before the voters in 2002 and 2006. In the former, 39% voted to free the weed, while in the latter, that figure inched up to 44%. But it's not enough to win in 2012.

Smoke shops throughout Florida are hoping a new law that regulates what they can sell will be repealed. The law makes it a misdemeanor for a smoke shop to generate more than 25 percent of its sales from pipes or smoking devices.

Thirty businesses have sued to block enforcement of the rules, which took effect in July.

Citizens of Washington, DC have waited more than 12 years to see the implementation of I-59, the medical marijuana law passed by more than 69% of voters.

District officials released regulations on August 6th that will govern the city's implementation of its medical marijuana program.