France  -  The annual sales figure for cannabis in France is estimated by the French Monitoring Centre of Drugs and Drug Addiction to be between 746 and 832 million Euros (1.11-1.24 billion US dollars).

Consumers' average annual expenditure on cannabis was estimated to be around 202 Euros in France, compared to estimates obtained for New Zealand and the Netherlands (124 Euros) and the United States (362 Euros).

Germany  -  The Federal Institute for Pharmaceuticals and Medical Products (BfArM, Bundesinstitut für Arzneimittel und Medizinprodukte), an office of the federal health ministry, changed in July the rules for patients who plan to apply for an exemption of cannabis use for medical purposes.

So far, one of the requirements for an exemption was the ineffectiveness of dronabinol (THC) or the refusal by the health insurance to pay for dronabinol treatment. Under the new guidelines, such refusal will no longer be accepted as a sufficient cause and only the ineffectiveness of dronabinol will be considered. A 19 May 2005 ruling by the Federal Administrative Court based on which to date some 10 applications for medical cannabis use have been approved, explicitly states that the BfArM cannot claim that dronabinol is available as an "equivalent" drug. 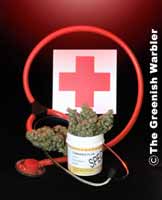 The ruling states: "The [BfArM's] reference to a drug, which is not readily available nor affordable for the normal citizen does not represent an alternative that would eliminate the general public interest in the medical use of cannabis." In a letter to the Federal Drug Commissioner, Sabine Baetzing, Dr. Franjo Grotenhermen, chairman of the German Association for Cannabis as Medicine, writes: "Given these conditions, would you please clarify whether the guidelines for an application for the medical use of cannabis still comply with the stipulations of the Federal Administrative Court."

Julian Critchley: Labour's "tough on drugs" approach was like "shifting the deck-chairs around on the Titanic".

UK  -   Julian Critchley, the former director of the Cabinet Office's Anti-Drug Co-ordination Unit, said Labour's "tough on drugs" approach was like "shifting the deck-chairs around on the Titanic". He said: "The drugs strategy doesn't work, can not work, because we have no way of controlling the supply of drugs."

It comes after a report found that police and customs are fighting a losing battle against the illegal drug trade despite billions of pounds being spent every year on fighting it. Mr Critchley, who ran the Cabinet Office's Anti-Drug Co-ordination Unit in the early years of the Labour Government, said a belief that drug use could be legislated away is "folly". He said he is in "no doubt" that their legalisation would produce a fall in crime, while providing heroin addicts with the drug on prescription would stop them committing crimes to raise money to supply their habit.

Now the Yes On B Coalition is seeking to tighten the screws even further on marijuana cultivation. Measure B, which won with nearly 52% of the vote, undid the lowest law enforcement priority and no prosecution policy by repealing Measure G. Under the new law, only medical marijuana patients and providers are exempt from prosecution, and only if they do not exceed county limits of six mature or 12 immature plants and eight ounces of dried marijuana, the same as the minimum provided for by state law.

USA / Presidential Politics  -   At a press conference last Friday, independent presidential candidate Ralph Nader called for emptying prisons of nonviolent drug offenders and filling them with corporate criminals. Nader's call came as he unveiled a 12-point program aimed at reining in the power of corporations.

"The criminal justice system is broken -- so badly that one hardly knows where to begin describing the breakdown," Nader said. "Let's start with the war on drugs, since commentators across the political spectrum recognize its lunacy. We pour almost endless resources -- roughly $50 billion every year -- into catching, trying, and incarcerating people who primarily harm themselves. This insane war on drugs damages communities and drains crucial resources from the police, courts, and prisons. These resources could be better used to combat serious street and corporate crime that directly violates the public's liberty, health, safety, trust, and financial well-being. As with alcoholics and nicotine addicts, the approach to drug addicts should be rehabilitation, not incarceration," he argued.

Cannabinoids as effective as other medications

From July 2003 until December 2005 patients with neuropathic pain of different causes, taking no other medication than weak analgesics (non-steroidal anti-inflammatory drugs), and referred to the Neuromuscular Clinic were included into the study. More than one third of patients was given gabapentin (37 per cent) as first medication. Other medications given first in more than 10 per cent of patients were pregabalin, topirimate and amitryptiline.

Cannabinoids (nabilone and Sativex) were given to 5 per cent of patients as first line therapy. Authors stated that "reasons for selecting gabapentin were typically because of anticipation of minor side effects, familiarity with its use, and nearly universal coverage through third party insurance agencies". There were no serious adverse events for patients by any of the medications. Prevalence of intolerable side effects was similar among the different groups of medications. Mean pain relief three and six months after beginning of treatment was also similar among the different medications.