Germany: Crafty Convicts Caught Cultivating Cannabis. Care in the community obviously has a lot to answer for in the German town of Moers, where two convicted criminals have been found tending an indoor cannabis garden containing over 1200 plants, whilst on day release from prison. The cultivating cons had achieved trustee status by being model prisoners, and were invited to leave the prison premises as a pre-cursor being released having served the jail term handed out by the courts.
"Certain prisoners are allowed to leave the prison premises as their
release date approaches", said Jurgen Helm, a journalist in Cologne.
Obviously in this instance the prisoners had taken advantage of this fact
and had set up an indoor cannabis garden in a warehouse on an industrial
park. "It appears the prisoners planned on growing the crop, and then exporting  it over the border into Holland, where its a lot easier to find a buyer for such an amount of cannabis," Helm continued. "The idea behind the scheme is to make the offenders rehabilitation into  the community as seamless as possible, by allowing the prisoner to seek work prior to his or her release." "This way it is hoped the newly released prisoner has access to money from the moment he is released, but I'm not sure this is quite what the authorities had in mind."

Canada: The federal government must loosen unfair restrictions that are preventing seriously ill Canadians from obtaining the medical marijuana they need to treat debilitating illnesses, lawyers for the sick argued yesterday in Federal Court. Health Canada has effectively established itself as the country's sole legal provider of medical marijuana, but is providing an expensive yet ineffective drug that doesn't meet the needs of many patients who use it to treat chronic pain, seizures and other ailments, Osgoode Hall law professor Alan Young said. It has also shrugged off complaints about the drug, which costs about $150 per ounce, and failed to improve the program by providing
patients with different strains designed for their specific medical needs, Prof. Young told the court. "It's not enough to say, 'Here's some pot for you, knock yourself out.' That's not the way medicine is delivered," he said outside court yesterday. "You come up with the optimal product." There are providers who want to supply various strains of the drug at a lower cost for medical use, but they're prohibited from doing so because government policy restricts them from supplying more than one patient, he added. Health Canada spokeswoman Joey Rathwell declined to comment yesterday on the case, as it is before the courts. The case, which began in 2004, will be heard for two more days in Federal Court. Some of the applicants have died since the case was
first filed; their number has been reduced to 17 from the original 27.

Oregon/USA: Paul Stanford Is Oregon's "Drug Czar." Now He's Under Attack. Paul Stanford should be at the top of his game. After more than two decades growing, toking and agitating to legalize cannabis, the 47-year-old Portlander is now running the largest chain of medical-marijuana clinics in the nation. Stanford spends half his time jetting between home and Honolulu, Los Angeles, Denver and Seattle, visiting his clinics that have helped thousands gain medical-marijuana permits. His nonprofit, The Hemp &
Cannabis (ahem, THC) Foundation, is on track to rake in $2 million this year. His headquarters in Southeast Portland is the center of Stanford's dank ganja empire. On a recent Monday morning, the folding chairs and overstuffed couches in the waiting room were filled with about 30 people--many looking as if they'd just rolled out of bed--who were´busily scratching out applications for permits to toke. If there is a kingpin of pot in Portland, it's Stanford--a man who can be credited with helping more people smoke legally here than anyone else. Of the 14,831 patients currently registered in the Oregon Medical Marijuana Program, Stanford estimates more than half,
8,000, gained their license to burn with the help of his clinic. "The goal of my life has been to end the adult prohibition from marijuana," Stanford says. Oregon's medical-marijuana initiative, which Stanford helped pass in 1998, brought him one step closer and landed Stanford's clinics on the national map. "He's certainly well known," says Allen St. Pierre, director of the National Organization for the Reform of Marijuana Laws in Washington, D.C. Stanford is also winning accolades--on Dec. 15, he's set to
receive the Freedom Fighter of the Year award from Oregon NORML. But all is not well in Stanford's green-tinted world. Even his own daily dose of the herb can't dispel the fact that his five-state operation--and his own reputation--is under simultaneous attack from three quarters, each one a potent buzz-kill in its own right. Taken together, they're like dirty bong water spilled on a clean set of sheets. First, there's former Republican gubernatorial candidate Kevin Mannix, who's pushing a 2008 initiative that would eliminate most of Stanford's client base by killing Oregon's Medical Marijuana Program. "It's gone overboard, and yes, he's been a part of taking it overboard," Mannix says. And then there's the Internal Revenue Service, which WW has learned is investigating Stanford for allegedly running his nonprofit as a personal slush fund. "This is a million-dollar organization that's being run like a lemonade stand," says Victoria Cox, spokeswoman for the state Department of Justice. Finally, there are those within the movement itself who claim that Stanford and others like him are driving Oregon's medical-marijuana program in the wrong direction by running it as a thinly veiled commercial enterprise. "All they're doing is endangering this program for the very sick and disabled people who count on this medicine," says Jerry Wade, spokesman for the Stormy Ray Cardholders'foundation, a Salem nonprofit promoting patient rights. 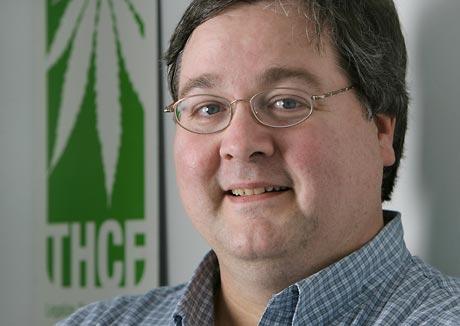 47-year-old Portlander Dr. Paul Stanford is running the largest chain of medical-marijuana clinics in the USA.