Mexico: Former Mexican President Vicente Fox has come out in favor of legalizing drugs in an attempt to disrupt the illegal markets that have turned parts of Mexico into battlegrounds. In a proposal published over the weekend on his website, Fox argued that drug addiction and drug-related violence should be treated as distinct and separate challenges. 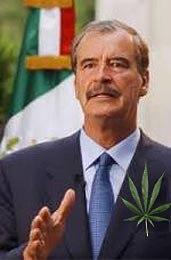 "So, drug consumption is the responsibility of the person who consumes; of the family who is responsible for educating; and of the education system and the socioeconomic context," wrote Fox, who was president from 2000 to 2006. "What we have to do is legalize the production, the sale and the distribution." Although Fox and current President Felipe Calderon both hail from the conservative National Action Party, or PAN, their views diverge on the issue of how to combat drug violence. "Legalizing in this sense doesn't mean that drugs are good or don't hurt those who consume," Fox wrote. "Rather, we have to see it as a strategy to strike and break the economic structure that allows the mafias to generate huge profits in their business."

International drug policy: Vienna Declaration Urges Global Decriminalization of Drug Use
More than 13,000 clinicians, researchers, andpublic policy experts have signed a declaration calling for the global decriminalization of drug use. The Vienna Declaration calls drug policy reform "a matter of urgent international significance" and states that the epidemic will continue to spread if more-effective policies are not adopted, said Stephen Rolles, MSc, senior policy analyst at the Transform Drug Policy Foundation, a think tank based in London, England.

"The conference...was shaped by the outpouring of support for the Vienna Declaration and the need for scientists to stand together to support illicit drug policies based on evidence instead of ideology," Dr. Wood observed. In the 50 years since countries around the world have outlawed the manufacture and possession of certain types of drugs, "the situation in terms of any indicators you might choose - public health, human rights, criminal justice - has deteriorated," Mr. Rolles added.

Germany/USA: Three quarters of citizens in the USA and Germany support the medical use of cannabis

According to a poll conducted by Emnid Institute there is a broad support in Germany when it comes to the medical use of cannabis. Of 1,001 interviewees asked by phone 76 per cent said that the use of cannabis for medicinal purposes should be allowed while only 18 per cent disagreed and 6 per cent had no opinion on this issue. The poll consisting of two questions was ordered by the German Association for Cannabis as Medicine (ACM). According to the answers to the second question 65 per cent of Germans think that a treatment with the cannabis compound dronabinol (THC) should be paid by the health insurances, which currently is usually not the case.

Support for the medical use of cannabis was highest among highly educated people, men, people between 50 and 60 years of age, and partisans of the small political parties, Greens (90 per cent), Liberals (85 per cent) and the Left (85 per cent). More than three quarters of the large parties Social Democrats (83 per cent) and Christian Democrats (77 per cent) also supported the medical use of cannabis. The lowest support was observed among non-voters (72 per cent). These results are in agreement with a recent Rasmussen poll in the USA showing that 75 per cent of Americans support the use of cannabis for medicinal purposes if  prescribed by a physician.

USA: The state of Colorado made about 7 million dollars (about 5.5 million Euros) in fees from the more than 700 dispensary owners who applied for their state license.

The state also received approximately 1,300 license applications for growing operations or related medical cannabis businesses. Under a new bill of June 2010 businesses working in the field of medical cannabis have to apply for a state license.

The District of Columbia will join 14 states that have medical marijuana programs, but it won't happen until next year under a plan announced last Friday by Mayor Adrian Fenty (D). It's been a long time coming. Voters in the District approved a medical marijuana initiative with 69% of the vote a dozen years ago (!!), but the city was blocked from enacting the will of the voters by the Barr Amendment, named after former Rep. Bob Barr (R-GA), which forbade the use of city funds to implement it. That rider to the District appropriations bill was removed by the Democratically-controlled Congress last year.

The council approved an amended initiative in May, but then the city had to wait 30 congressional working days to give Congress the opportunity to change its mind, which it didn't do. Now, the mayor has unveiled the draft rules, but the city will not start taking applications for dispensary and cultivation permits until January 1. Under the proposed rules, up to five dispensaries could operate and would pay $10,000 a year for the privilege.

Similarly, up to 10 cultivation centers growing up to 95 plants at a time could operate and would pay $5,000 per year. Officers for those operations would additionally pay a $200 annual registration fee, managers would pay $150, and employees $75. Patients would have to purchase their medicine from the dispensaries because, unlike all other state medical marijuana programs except New Jersey's, there is no provision for patients to grow their own.

Patients and caregivers would pay $100 a year to register, but those earning less than twice the federal poverty level would pay only $25 and would be eligible for subsidized pot on a sliding scale. Dispensaries and cultivation operations would have to set aside 2% of their revenue to subsidize poor patients.

The Coalition for a Safer Detroit, sponsors of a municipal initiative that would legalize the possession of up to an ounce of pot for adults 21 or over in the Motor City, has appealed a surprise decision Monday by the city's Election Commission that knocked the initiative off the ballot. The coalition handed in more than 6,000 voter signatures earlier this year, and the initiative was approved by the same Detroit Election Commission that killed it Monday.

After it was approved, in accordance with city law, the initiative went before the Detroit City Council, which could have voted to make the initiative law. By failing to vote on the initiative, the Council cleared the way for the voters to make their preferences known in November -- or so everyone thought. But on Monday, the Election Commission voted 3-0 to remove the measure from the ballot. The surprise move came after Detroit Corporation Counsel and commission member Krystal Crittenden told the commission that in the opinion of the city's law department, which she oversees, state law forbidding marijuana possession preempted the measure.