Canada: B.C. Provincial Court heard Thursday that cannabis is safer than aspirin and can restore the balance in people's bodies to help fight illness. That was the testimony of Dr. Robert Melamede, an associate professor at the University of Colorado, who was brought in by the defense team for the four men accused in the Holy Smoke Culture Shop drug trafficking case taking place in Nelson this week. Melamede's testimony comes on the second day of what is supposed to be a week-long trial.  In a lengthy scientific explanation, the U.S. expert told the court that the human body produces marijuana-like compounds, or endocannabinoids, which act as a "lubricant" for food
produced chemicals called "free radicals" that are very reactive and can cause an imbalance in the body. "You can look at the harm caused by free radicals as biological
friction or biological rust and the endocannabinoid system minimizes the impact of that and directly acts as an antioxidant as well as modifying the biochemistry in a way that minimizes the impacts," said Melamede outside court Thursday, likening endocannabinoids to humans like oil is to cars.  He said if you don't have lubrication in your car, your car breaks.  In the human body, the damage comes in the form of age-related diseases. "I'm saying what science has now shown is that marijuana and cannabinoids are effective anti-aging agents which means that they are effective in minimizing the onset and the severity of age-related illnesses which include cognitive dysfunction things like Alzheimers, cardiovascular disease be it heart attacks, strokes, or clogged arteries," he said.

A legend has died: At the age of 102 years, Albert Hofmann died peacefully on 29th April, in his home near Basel, Switzerland. Still last weekend we talked to him, and he expressed his great joy about the blooming plants and the fresh green of the meadows and trees around his house. His vitality and his open mind conducted him until his last breath. He is reputed to be one of the most important chemists of our times. He is the discoverer of LSD, which he considers, up to date, as both a "wonder drug" and a "problem child". In addition he did pioneering work as a researcher of other psychoactive substances as well as active agents of important medicinal plants and mushrooms. Under the spell of the consciousness-expanding potential of LSD the scientist turned increasingly into a philosopher of nature and a visionary critical of contemporary culture. Until his death Albert Hofmann remained active. He communicated with colleagues and experts from all over the world, gave interviews, and showed great interest in the world's affairs, although he decided to retire from public life already a few years ago. Nevertheless he welcomed visitors at his home on the Rittimatte, and opened the door for late in the evening. 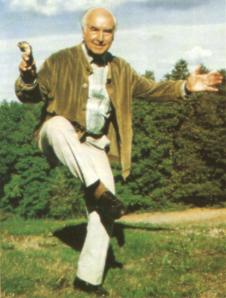 A legend has died: At the age of 102 years, Albert Hofmann died peacefully on 29th April.

UK: Tougher laws on cannabis will be announced this week despite a report saying there is no scientific evidence for the change. Gordon Brown has decided to throw out the recommendation by a high-powered group of government advisers who say it should stay a "soft" drug. The Prime Minister will instead take a hard line, sending a message
that drugs are dangerous to young people's health and heavily linked to serious crime. His stance was confirmed on the day that the Advisory Council on the Misuse of Drugs was handing in an official report that is understood to recommend that cannabis should remain in the lowest category of illegal drugs, Class C. The advisory council is the most senior authority on drugs policy and was asked by Mr Brown to review the law amid concerns over stronger forms of cannabis such as skunk that are linked to mental illness in long-term abusers. With 23 experts in drugs and their treatment, the advisory council has never before been ignored by the Government!

Science: Giving carefully calibrated doses of marijuana to people with neuropathic pain, which can be difficult-to-treat and extremely painful, can ease their pain without clouding their minds, California researchers report. Neuropathic pain can result from spinal cord injury, diabetes-related nerve damage, multiple sclerosis, or other types of nerve injury, and is typically treated with a wide range of drugs including antidepressants, anticonvulsants, opioids, and anti-inflammatories, the study's lead author, Dr. Barth Wilsey of the University of California, Davis Medical Center, said in an interview. Wilsey became interested in testing marijuana for treating neuropathic pain, he said in an interview, after many of his patients told him they were already smoking pot to cope.